Gassing process at Krema 4 and 5

Gassing process at Krema 4 and 5 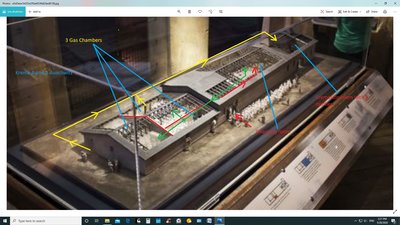 I found this photo of either Krema 4 or 5 at Auschwitz Birkenau
also see this video link: https://www.youtube.com/watch?v=KFa7-pC4Wd8&t=1418s
you are invited to watch the whole video but at least watch from 21:41 to 27:50 if you can stand it.
Note the look on this guy's face when explaning the gas and burn process. He also explains the grates in the stairway at krema 3

I finally understand the process of these two said kill centers and wish to pass it a long to you all
Decide for yourself if this is rational German Engineering planning. I for one do not.

Note that krema 4 was on line for only 50 days after it went on line in the spring of 1943.
Water came down instead of the gas

When he was standing at the ash pond I thought he was going to say that nothing will grow around the pond due to the human ash having been piled there. But the fact is I would guess that they just use weed killer to keep the weeds at bay. Odd that he feels free to pick up what he says is human bone meal. Wouldn't that be illegal there? Also odd that he claims the ash is ten feet deep all over that area. How does he know that?

He never seems to state that people did die of natural causes as well as diseases connected with war time privations etc.

The praise heaped upon the bloke in the comments below is sickening. I only looked the first ten or so comments but no one was questioning him.
'Of the four million Jews under Nazi control in WW2, six million died and alas only five million survived.'

It's funny when the girl on the tour wonders why the undressing rooms were so much larger than the gas chambers:

Look at the extremely defensive body language of the tour guide when the girl makes that observation. "There's a big reason for that!" The Tour Guide goes into danger mode when that observation is made.

It's amazing how some kid on a tour is able to immediately see such a discrepancy in the official narrative being told. It shows how the lies only stand because of their ongoing propaganda efforts. The lies cannot stand on their own because they are not logical, even to a young person on a propaganda tour.

borjastick wrote:When he was standing at the ash pond I thought he was going to say that nothing will grow around the pond due to the human ash having been piled there.

On the contrary, Sergey assured me that human ash cremains were used as fertilizer, so I'm surprised that the area is not lush with cabbage.

Edit: At about 4:00 the Tour Guide claims that "sometimes, when they ran out of Zyklon B gas, they would take people and simply throw them into the furnaces alive."

I can't keep track of which lies are official and which lies are unofficial parts of the Holocaust Narrative. Is this really claimed by mainstream sources? The tour guide wouldn't just say this if it was false, would he?!

david2923 wrote:Krema 4 or 5.jpg
I finally understand the process of these two said kill centers and wish to pass it a long to you all
Decide for yourself if this is rational German Engineering planning. I for one do not.
.

I think that the allegation of "industrial killing" at KIV & V is the most ridiculous thing that could be told about Birkenau.
- no logic for the circuit of "victims"
- supposed 6 little windows for the "introduction of Zyklon B" and a ludicrous "circus act" by the SS in charge (sic Pressac)
- no ventilation (counting on "natural ventilation" aka "the wind")
- Zyklon B pellets still exhaling toxic HCN while disposing the "victims" after 30 mn of "gassing".

Believing in homicidal gassing in such a place is believing that engineering was in a stone age during the III Reich.

Although the operating sequence looks simple enough, it had become irrational and ridiculous. It was irrational to have the victims going from the central room to the gas chambers then being brought back, thus destroying the linear logic of the initial design. It was ridiculous to have an SS man in a gasmask balancing on his short ladder with a 1 kg can of Zyklon-B in his left hand while he opened and then closed the 30 by 40 cm shutter through which he introduced the pellets with his right hand. This performance was to be repeated six times. If he was not capable of such a balancing act, the SS had to climb his little ladder three times for each opening: first to open the shutter (up and down), second to introduce the Zyklon-B (up and down) and third to close the shutter (up and down). Six openings, eighteen times up and down the ladder wearing a gasmask. A simulation shows that this exercise would take 10 minutes. A few steps installed beneath each opening would have avoided all this performance.
.../
3. Introducing the poison resembled a circus act.
.../

3. The Zyklon-B introduction openings were enlarged from 30 x 40 cm to 40 x 50 cm [????, ndr] and the system for opening and closing them was simplified. The method of introduction remained the same, however, the camp authorities considering that a little physical exercise would do the medical orderlies responsible for gassing a world of good"

The praise heaped upon the bloke in the comments below is sickening. I only looked the first ten or so comments but no one was questioning him.

true it was slickening to see those comments

But, Look again, I recently commented to him asking about fire brick change out. No reply though
Water came down instead of the gas

There is an immense amount of discussion about Krema 2 since that was supposedly the main gas chamber. And there's also tons of discussion about Krema 1 because that's the one that's still there. But 4 and 5 don't really come up as much. Looking at the plans though, these gas chambers are even less believable than Krema 2. Krema 2 has lots of problems (like the little elevator, lol) but at least it has the two large halls and they can say they got undressed in the one and got gassed in the other. So at least they have a little story for it that can work if you don't think about it. But the Krema 4 blueprints are even less impressive.

They say that they went into the big room in the middle (#6, actually the morgue) and got undressed there. Then they went over to the the three rooms over to the left (#1) where they were gassed. There were no holes in the ceiling. They supposedly threw the Zyklon in through the window. Then they brought the bodies all the way over to the other side of the building to the ovens (#10).

Why would they have three gas chambers arranged like that? Why would they bother with a doctor's office (#5)? Why are there ventilation chimneys (#7) for the morgue and not the "gas chambers"? And why would they have built it this way if these structures were built in 1943 and were supposedly designed to be mass gassing facilities? I mean, maybe if the building was already there you could say they had to improvise but it's just not plausible that you'd design a made-to-order gas chamber-crematory combo and would end up with anything like this.

Right after the guy gets done explaining the moronic gassing procedure,

Guide: It's the way they designed it. I understand that it does seem a little inefficient but that's the -

Girl: Because you go from this end to that end, like going back and forth.

Guide: Right, right. But ... that's the way they were built.

See the hoax, I mean the hole in the ground, that's where the gas chamber used to be. It was removed for your safety.
Top

Are there any exterminationist sources that cite the population of Birkenau at any given time?
At the 10:30 mark the teacher in the video repeats the claim of 12 people sleeping on each tier of the bunks.
You'll often hear claims from survivors ranging anywhere from 8-15. This would equate to an enormous population in the camp.
My first guess would be that the holocaust industry would brush this aside as survivors who tend to exaggerate, but here we have a guided tour incorporating this impossible garbage.
Top
Post Reply
9 posts • Page 1 of 1