What passes for 'pictures of the 'holocaust'' are downright laughable, no, impossible.

For example, here we have the alleged door of a homicidal gas chamber at Auschwitz.

- The claim is that Jews were supposedly lured into these "gas chambers" expecting showers while on the alleged door a sign is displayed stating "Harmful gas! Entering endangers your life." How did that work?

- Then the claim is that 'the Germans tried to hide to all the evidence of their crimes', yet here we see an alleged gas chamber door intact, which one can assume is allegedly attached to a "gas chamber" which has not been destroyed, complete with an allegedly incriminating sign.

At left: The door at the concentration camp Majdanek from which the USHMM made the replica which is now on display in Washington D.C.. At right, the real function of the door and thousands more like it is shown in a widely distributed German ad for bomb-shelter doors and window covers, intended for military and civilian use. Approximately 670,000 German civilians were killed in the massive Allied terror-bombing campaign directed at population centers throughout Germany.

A standard air-raid shelter door is displayed at the United States Holocaust Memorial Museum along with the claim that it is a casting of the door to a homicidal gassing chamber at the Majdanek concentration camp. The peephole was supposed to be for monitoring the progress of killing with cyanide gas released from a common fumigation product called Zyklon B. Those looking through it were sometimes said to do so to monitor and improve the efficiency of the killing system, but a more common charge is that it was done for sadistic personal pleasure.

Many are convinced that German hatred for Jews was so great that they derived great amusement and satisfaction from watching their death throes, as well as engaging in bizarre forms of harassment and torture, some of them quite fantastic, bordering on the supernatural. There's been a steady tendency for the claims to increase their variety and horrific detail with the passage of time, perhaps showing the dubious phenomenon of recovered memory enjoying its most productive period ever.

The realities of the myths that sprang from a thirst for vengeance and are sustained by it still, with the added factor of a memorial industry and reparations in the billions of dollars that depend on it totally, are often very different.

The door and window shutter (Türen und Blenden) on the right appear in an advertisement for equipment to outfit the thousands of air-raid shelters built across Germany and occupied territories, including the concentration camps. (See: Technique and Operation of German Anti-Gas Shelters in World War II, by Samuel Crowell) As noted in the Crowell article, and several more to come, it has recently been discovered that German air-raid shelters were required to also provide protection against gas attack. With WWII coming only 20 years after WWI, memory of the horrors of gas warfare then were relatively fresh, and the Germans took more defensive measures than most since the conflict was sure to be played out again on European soil.

The peepholes in the doors were for safety purposes. People inside wanted to be able to see conditions outside before exposing themselves to possible danger, and rescuers from outside had the same concern, plus wanting to make a quick evaluation without opening the door in order to save precious time (seeing if everyone was dead, or if no one was inside).

Steadily, piece by piece, the sources of the myth are being exposed at an accelerating pace. Camps inside the borders of Germany were available for inspection by many people after the war, and the adamant accusations of killing centers there made in 1945-46 were officially admitted to be false in 1960. Despite this, or perhaps because of it, show trials were held to reinforce the story in the public mind, particularly and most successfully in Germany, and another group of German veterans were convicted based on flimsy, contradictory and often quite unbelievable oral testimonies, as at the earlier kangaroo trials. There, accusations that someone struck a prisoner were sufficient to result in a death sentence for participating in a conspiracy to commit crimes against humanity. It was not necessary to prove that the person killed anyone, only that he or she played an active part in a sprawling system that did so. Despite the fact that the false allegations about mass gassing chambers in Dachau and other German camps came from some of the same sources that made similar charges about Auschwitz, Treblinka and Majdanek, there was no call to question the now suspect testimony. It was accepted as fully true with no hesitation.

But with the fall of the Soviet Union and the opening of many of its archives, fresh eyes and attitudes are actively seeking the truth of the matter and in the process finding truth to be a scarce commodity when atrocity charges are involved. The now Religion of the Holocaust has defenders as fiercely immune to logic and a concern for truth as any fundamentalist religion that has ever existed. Nevertheless, at some point the burden of supporting the unsupportable will become too hard and too dangerous, and we predict that at that time the gas chamber canard will be quietly abandoned in favor of the real and documented wrongs of a lesser but still horrible magnitude.

Perhaps the Allied powers will one day own up to their own crimes, committed in an effort to grind the will of the German people into dust so that they would not pose a future threat to those who consider domination of world trade and finance to be their exclusive possession. Almost 15 million Germans were summarily expelled from their homelands that in some cases went back 700 years or more, cast into the harshest European winter in a century with only what they could grab and carry. More than two million of them died of starvation, disease, and merciless attacks from those they encountered on their frozen paths of desperation. It was a pogrom of a magnitude unmatched in recorded history, and not only have the victims never received any kind of compensation, their story is known to very few because of a virulent anti-German bias that flourishes in the corridors of power. The innocent souls of the German victims are surely as worthy of acknowledgement as any other group victimized, and the situation cries out for justice, for at least a chronicling of the truth.

That lot will fall to another generation, but this will be the one to force a public and honest re-examination of what really went on inside the German forced labor camps from 1940 to 1945. Any who feel threatened by truth or the search for it say far more about the validity of their own positions than do their critics. 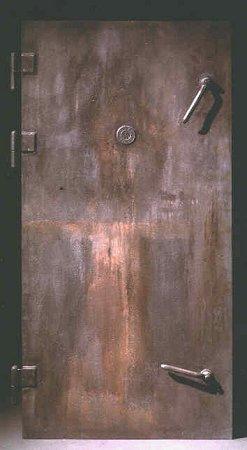 A remarkably sinister rendering of the air raid shelter door casting at the USHMM, found at their student outreach web offering. The caption there is:

"This casting of a door to the gas chamber in the Majdanek killing center, near Lublin, Poland, was commissioned by the United States Holocaust Museum in 1989. Majdanek functioned as a concentration camp, forced-labor camp, and killing center. Each gas chamber in Majdanek was fitted with an airtight metal door. It was bolted shut before gas entered the chamber inside. SS guards could observe the killing process through peepholes in the upper center of the door."

But, as can be seen from the ads and Crowell's article, this is just one of thousands of such doors that were produced in an attempt to keep the people in Germany from being blasted into eternity by the relentless carpet-bombings.

"- The claim is that Jews were supposedly lured into these "gas chambers" expecting showers while on the alleged door a sign is displayed stating "Harmful gas! Entering endangers your life." How did that work?

Maybe they were blindfolded before they were handed a bar of soap and a towel.....it's just a thought.
Maybe, just maybe, they believe what they are telling you about the 'holocaust', but maybe, just maybe, their contempt for your intelligence and your character is beyond anything you could ever have imagined. -- Bradley Smith
Top

Pressac made an interesting report on the gas-tight doors found at Auschwitz. 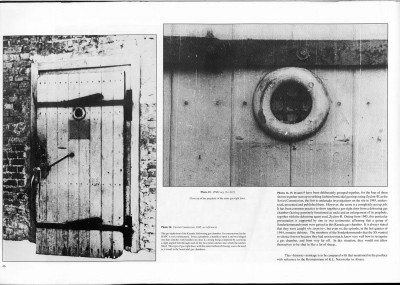 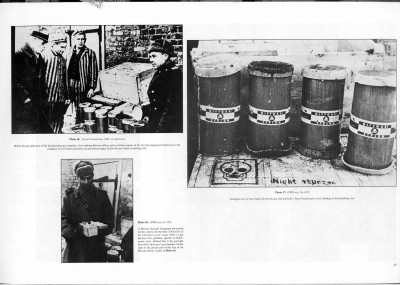 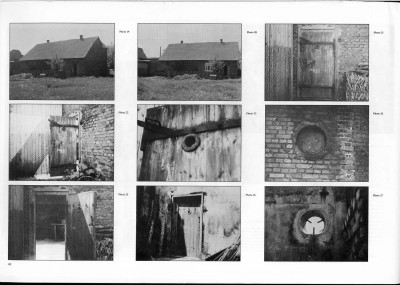 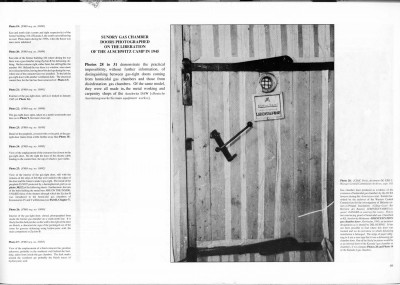 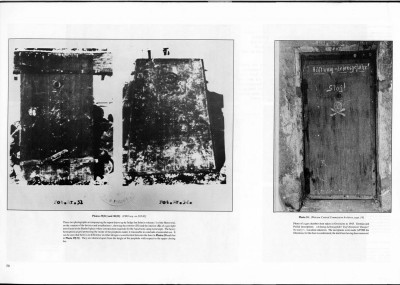 SUNDRY GAS CHAMBER DOORS PHOTOGRAPHED ON THE
LIBERATION OF THE AUSCHWITZ CAMP IN 1945
Photos 28 to 31 demonstrate the practical impossibility, without further information, of distinguishing between gas-tight doors coming from homicidal gas chambers and those from disinfestation gas chambers. of the same model, they were all made in the metal working and carpentry shops of the Auschwitz DAW ["Deutsche Ausrüstungswerke / German equipment works.]"

Gas chamber door produced as evidence of the existence of homicidal gas chambers by the LICRA lawyers during the “Faurisson” trial. Exhibit furnished by the archives of the Warsaw Central Commission for the investigation of Hitlerite crimes in Poland. Instruction “Giftige Gase! Bei Betretendes Raumes LEBENSGFFAHRT / Toxic gases! DANGER on entering this room.” This is not convincing proof of homicidal use. Classified as KL Auschwitz-Birkenau “DISINFESTATION gas chamber door," Oswiecim, 1945, an incorrect designation as it should be DELOUSING. It has not been possible to find where this door was located and we do not know to which delousing installation it belonged. The strips of paper adhering to it are a sure sign that it was a delousing gas chamber door. One of the likely locations would be as an internal door of the Kanada I gas chamber or chambers, if we compare Photos 28 and Photo 14 of the Kanada I gas chamber. 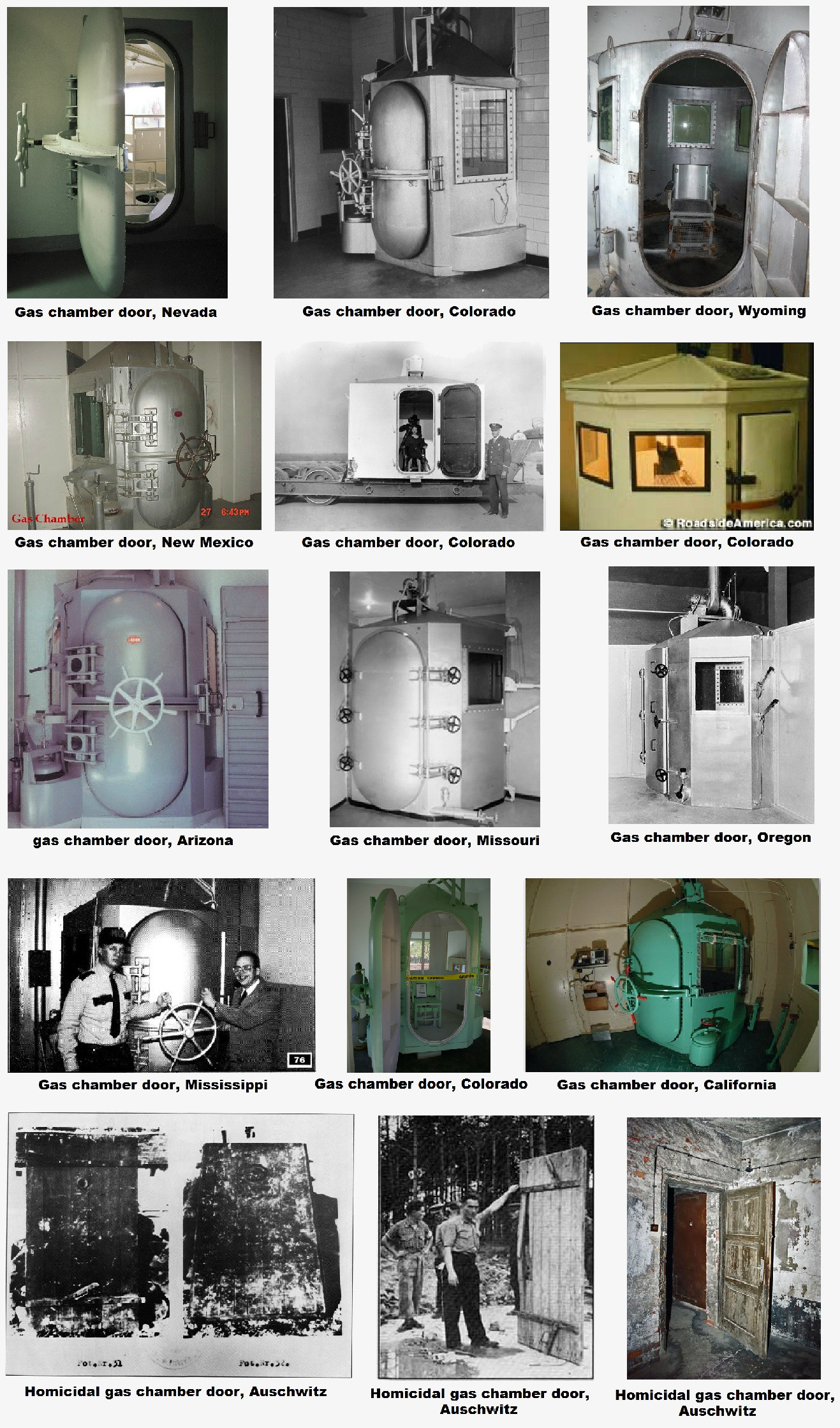 Asterion:
In the future please make comments, give viewpoints, etc. with your posts.
From our basic guidelines at : viewtopic.php?f=4&t=358

If you post a quote or link from or to a book, a news article, magazine story, another website, etc., you must also comment on the quote or the link content. Tell the forum what you find wrong, compelling, unique, or important about the quote or link content. Flippant, overly brief comments are not acceptable. We want commentary and discussion.

Thanks, M1
Only lies need to be shielded from debate, truth welcomes it.
Top

Jip, spot the differences and find the mistakes.

A true believer is of course not impressed by this. He will deem this an evil Nazi trick and stick to the face in the relics.
Top
Post Reply
6 posts • Page 1 of 1