Zionist propaganda says that only ca. 350,000 Jews from Poland were still alive after WWII. All others were supposedly murdered.

However, I recently came across this gem from Stephen Wise, the President of the World Jewish Congress, on the numbers of Polish Jews in Europe who were homeless, outside of Poland, and quite alive after WWII.

A September 1945 letter sent from Stephen Wise, the President of the World Jewish Congress (WJC), to a friend and colleague in the US. Wise was in Europe overseeing Jewish relief operations, revealed that:

[there are]...one and a quarter to one and a half million homeless Jews on the European continent, afraid to return to Poland for they rightly dread pogroms, with only one place to go -- Palestine.'

And that's just those homeless, outside of Poland, & not counting those already in Palestine.

'Oh what a tangled web they weave. When first they practice to deceive.'

"And that's just those homeless, outside of Poland, & not counting those already in Palestine"

Nor is it counting how many Polish Jews went to Russia, America, Canada, Australia, South America, etc...

Nor is it counting the Polish Jews who were not homeless.

Hannover wrote:with only one place to go -- Palestine.'

Palestine. It's so definitive. Made even more so coming from such an illustrious source as Stephen Wise. There is a vague Zio-centric ideology floating around, promulgated by such non-illustrious sources ala Howard Stern, amongst others, that Palestine never even existed. That the land was, is now, and forever shall be, the 'Biblical homeland of the Jews'.
And that of course brings me back to my favourite topic and yours, that ol' time religion.
Suffering plays an important role in all the semitic cults. There's the long suffering of the Jews, captivity and exile, etc.
The suffering of Christ. Suffering as atonement, redemption, and a ticket to heaven. Suffering as psychological guilt that some poor Jewish lad was nailed to a cross for sins I had yet to commit. The posthumous exploitation of suffering and the icons of suffering. I think the parallels are obvious and rendered the Christian mind ripe to bow at the Wailing Wall.
Top

Hannover, as you know General Patton made reference to one million jews who appeared from nowhere and had to be fed and housed in Germany plus surrounding areas immediately at the end of the war.

Of course this figure from Mr Wise could only include those who were known to exist on the western side of Russian controlled territories, so basically that is from Denmark in a straight line down to Italy or thereabouts. That leaves an enormous territory of tens of millions of people, including of course jews plus Russia itself where we know at least 2m jews were evacuated into in 1941-1942.
'Of the four million Jews under Nazi control in WW2, six million died and alas only five million survived.'

I have received the actual pages below from the work cited in the OP, The Personal Letters of Stephen Wise, from Forum participant Henry.
Many thanks for his effort.
M1 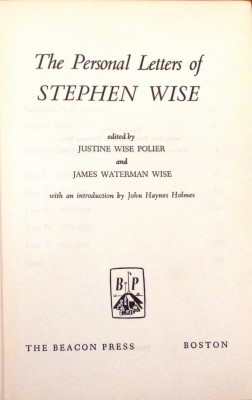 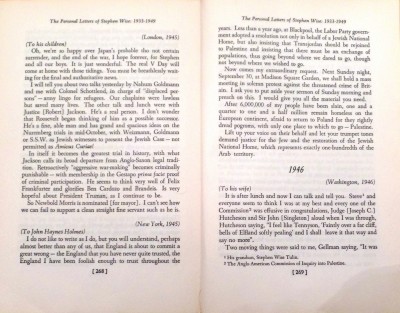 Only lies need to be shielded from debate, truth welcomes it.
Top

Moderator wrote:I have received the actual pages below from the work cited in the OP, The Personal Letters of Stephen Wise, from Forum participant Henry.

Does anybody on here have a pdf version of this book? I'd like to read the whole thing for free.
"But, however the world pretends to divide itself, there are ony two divisions in the world to-day - human beings and Germans.” – Rudyard Kipling, The Morning Post (London), June 22, 1915
Top

I have procured a physical copy of the book. My copy is from Beacon Press, published in 1956. So far I've only gone through the 1933-1949 material which is only about sixty pages. Most of the book is from before the Hitler period.

Quite a few of the letters are to a man named John Haynes Holmes. He was "a prominent Unitarian minister, pacifist, and co-founder of the NAACP and the ACLU."
https://en.wikipedia.org/wiki/John_Haynes_Holmes

Below I've excerpted my selections, in reverse chronological order.

Pg 276 (1946) - 200,000 in the DP camps, 1.2-1.4M homeless in Europe
"And still, dear Holmes, I saw the DPs in Zeilsheim. We are faced not by a theory but by a tragic condition for the nearly two hundred thousand in the camps; by the finish of Poland as a home for Jews; by the homelessness of a million two hundred to four hundred thousand throughout Europe. i know we have your sympathy in this awful dilemma."

Pg 275 (1946) - Lobbying to get the cap of 110,000 raised in the American Zone.
"Goldmann and I are going to Frankfort on Friday as guests of General McNarney to beg him to let Polish Jews come into the American Zone beyond the 110,000 which he designated."

Pg 268 (1945) - Nuremberg, Justice Jackson
"The other talk and lunch were with Justice [Robert] Jackson. He's a real person. I don't wonder that Roosevelt began thinking of him as a possible successor. He's a fine, able man and has grand and spacious ideas on the Nuremberg trials in mid-October, with Weizmann, Goldmann or S.S.W. as Jewish witnesses to present the Jewish Case--not permitted as Amicus Curiae!

"In itself it becomes the greatest trial in history, with what Jackson calls its broad departure from Anglo-Saxon legal tradition. Retroactively 'aggressive war-making' becomes criminally punishable--with membership in the Gestapo prima facie proof of criminal participation. He seems to think very well of Felix Frankfurter and glorifies Ben Cardozo and Brandeis. Is very hopeful about President Truman, as I continue to be."

Pg 260 (1942) - Early Extermination Claims
"I have had the unhappiest days of my life. Please remember, dear Holmes, that in addition to all your suffering over everything connected with the war, I have something more, namely the uniquely tragic fate of my people. You will be tempted at once to ask, why do I think of it as "uniquely tragic"? "Is it any worse than the fate of the Czechs of Yugoslavs of Poles?" Yes! Think of what it means to hear, as I have heard, through a coded message--first from Geneva, then from Berne, through the British Foreign Office,--that Hitler plans the extermination at one time of the whole Jewish population of Europe; and prussic acid is mentioned as the medium.

"The other day something came to me which has left me without sleep: that 100,000 Jews within the Warsaw ghetto have been massacred by the Nazis and their corpses have been used to make soaps and fertilizers."

Pg 257 (1941) - Madagascar Plan
"It is all a very sad and confused story. But we, who have seen the blue-prints of Madagascar settlement of Jews as the next step in the proposed expulsion of Jews from Europe which they have helped to enrich and civilize for two thousand years, cannot reconcile ourselves to the ideal of non-resistance, though advocated by a Jew and studiously and ignored by the nations and peoples which, far from practicing non-resistance against Jesus' people, have for nineteen centuries, assailed and broken the Jew"

Pg 255 (1941) - Isolationists and anti-Semitism
Letter to Holmes. Senator Rush Holt was set to give a speech with Holmes and Wise is worried he's going to talk isolationism and may slide into anti-Semitism so he wants Holmes to talk to him. Wise mentions two other guys, Burton K. Wheeler and Rufus Holman, whom he sees as problematic isolationists (not Lindbergh though). This part made me chuckle: "Of course, you know that neither Wheeler nor Holt mention the Jews, but Wheeler, for example, spoke of international bankers, (as did that stupid ignoramous Holman) and Wheeler made reference to three Jewish firms, curiously enough omitting the name of Morgan. It is not enough not to mention Jews by name, seeing that as you best know, no Jew on earth has asked any nation to take up arms against Hitler, despite the mountainous agony of the Jewish people. It seems peculiarly and unforgivably unjust, implicitly or explicitly to charge Jews with war-mongering, as the rabble-rousing Wheeler and Holman have done."

Pg 252 (1938) - Kristallnacht
"I am trying to keep Jews silent until after tomorrow's funeral of the victim of the crazed Polish Jewish boy. I have an undefined dread that 'Hitler the madman, and the cripple-minded Goebbels' may call for a widespread massacre. God help us!"

Pg 233 (1936) - Roosevelt
"...that I might help him to see the light and the right about the Nazi situation. Excepting for Frankfurter and Brandeis, he has been surrounded by timorous Jews. Quite confidentially, I may tell you that the moment I broached the German situation and suggested his saying a word in personal approval of McDonald's report, his reply was, 'But Max Warburg wrote to me that the situation in Germany is so hopeless that nothing can be done!' I confess I have been 'cussing' Max Warburg's head off, for he had and has no right to dispirit the President. It is he who is back of this whole attempt at a Transfer Bank. Sir Herbert Samuel let the cat out of the bag at a Conference last week when he said, "We must be careful because Dr. [Hjalmar] Schacht and Max Warburg are working this thing out together."

Pg 226 (1933) - Anschluss, written from Austria
"This country is seething with politics, the people, but for the too numerous Nazis, hoping to retain their independence. They are horrified by the prospect of an Hitler Anschluss!"

Pg 223 (1933) - German situation, written from Switzerland
"...the insistence in certain quarters that all Jewish institutions in Germany must be maintained as if in six months or a year there was to be a rehabilitation of German Jewish life, when in truth, according to every worthwhile authority, Jewish and Christian, the Jews of Germany are finished and their only recourse is 'heraus'"