Where is This photo taken and is IT authentic? 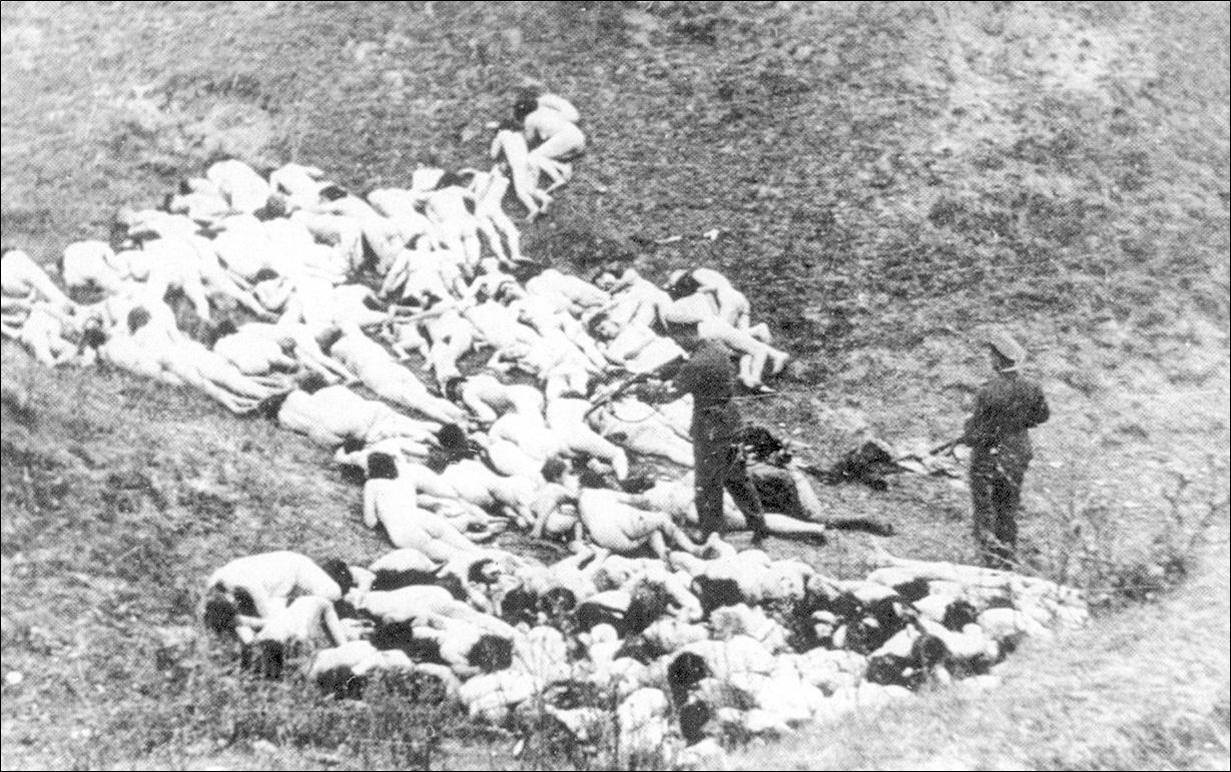 This picture pops all over the place with various captions and supposedly in all manner of locations!

I have seen this captioned as Babi Yar, ghetto mass shooting, and in Rhodes' Masters of Death (an unimpeachable account of all things Einsatzgruppen) as the following:

Himmler called the final round of SS murders of ghetto inhabitants in the fall of 1943 'Operation Harvest Festival.' By then (as here, in 1942 for the Mizocz ghetto outside Rovno in the western Ukraine), most of the victims were women and children.

So this is supposed to be a genuine picture of a mass shooting of women and children. I ask you if you think it is genuine? We've all seen pictures of real bodies having been shot and these look nothing like it. It is totally posed and a fraud. They are all lying down with not a spot of blood on them. Some will say they have yet to be shot but then take a look at the way they are lying and look at the soldiers. SS men they are not.

I'm not buying it and nor should you.
'Of the four million Jews under Nazi control in WW2, six million died and alas only five million survived.'

The plants on the ground show that those people were not in a hole (execution pit) but in a mere slight soil depression, what implies that the alleged executioners would have been compelled to dig a large mass grave with their own hands in order to bury their victims after the alleged mass execution. There is a good reason why the orthodox narrative claims that the victims were forced to dig their own graves by themselves. The alternative (i.e. mass graves dug by the executioners) is so ridiculous and unbelievable that even the most shameless Holohoaxers never dared to claim such a thing (as far as I know).
"But, however the world pretends to divide itself, there are ony two divisions in the world to-day - human beings and Germans.” – Rudyard Kipling, The Morning Post (London), June 22, 1915
Top

OK so I have spent a few hours this afternoon on the massacre that this photo supposedly is part of (it's not really but let's play the game for a while).

The town was called Rovne or Rivne or Rowne depending on your background and if you used the Yiddish name for it. The claim is that about 17000-18000 jews were rounded up, this applied to those who couldn't get a work permit to stay. They were then all together rounded up and marched to a local forest where large pits had been dug. They were then machined gunned by 'tommy guns' into the pits. The pits were full to the brim and with only a light covering of soil and many months later the claimed smell was horrific.

It is worth noting that the book only deals in witness statements and has no forensic evidence whatsoever as far as I can see. It is also worth noting that the jews were told they would be relocated and that Rivne does in fact to this day have a very large and well connected railway station.

The book is available on a free pdf download here - http://shron.chtyvo.org.ua/Burds_Jeffre ... 1_anhl.pdf

It contains plenty of lovely and outrageous statements as they usually do such as the 'fact' that another site of jewish mass murder was built on afterwards and this colourful description contains the usual nonsense.

The book shows no pictures during or after the events of Rivne, no pictures of claimed mass graves and little evidence apart from witness statements.

Ripping Yarns all round me thinks.
'Of the four million Jews under Nazi control in WW2, six million died and alas only five million survived.'

Indeed, you just gotta love 'shot dead nude women' with no bullet holes, no blood, and 'shooters' who are not in German uniforms.

This photo used to be at the Wikipedia page on 'Babi Yar', it has been removed.

"Alone the fact that one may not question the Jewish "holocaust" and that Jewish pressure has inflicted laws on democratic societies to prevent questions—while incessant promotion and indoctrination of the same averredly incontestable ‘holocaust’ occur—gives the game away. It proves that it must be a lie. Why else would one not be allowed to question it? Because it might offend the "survivors"? Because it "dishonors the dead"? Hardly sufficient reason to outlaw discussion. No, because the exposure of this leading lie might precipitate questions about so many other lies and cause the whole ramshackle fabrication to crumble."

- Gerard Menuhin / righteous Revisionist Jew, son of famous violinist
If it can't happen as alleged, then it didn't.
Top It is worth pointing out that the book I reference above, was published in 2013 and took ten years to write and research. Yet after all this time and some effort on the part of the author he failed to even begin to look for current forensic evidence to prove what is claimed. In fact the book is really just a collection of non corroborated witness statements which had been scattered to the winds of time, and then collected by the author in one place, his book. He questions nothing and buys the claims completely without so much as a jot of caution and thought. In other words it is just propaganda.

Holocaust East versus West: The
Political Economy of Genocide
Abstract:
Three main elements distinguished the Holocaust in
the East from the Holocaust in Western and Central Europe.
First, the Holocaust in the East was presented to the public
as a war of liberation from Stalinism, from Soviet
“Jewish-
Bolshevism.”
Second, the Holocaust in the East was by and
large carried out openly, in the presence of non-Jewish locals. In
the West, most Jewish victims of the Holocaust were rounded
up and forcibly transported in sealed trains to concentration
camps in Central and Eastern Europe. This distance generated
considerable space for deniability: sustaining the myth that
Jews had been the victims of deportation and forced labor, not
of mass annihilation. In contrast, a much smaller proportion
of Soviet and East European Jews were exterminated in camps.
While most Western and Central European Jews perished in the
“industrial efficiency”
of the camps, most Jews in the Soviet
and Eastern European zones were shot, and the overwhelming
majority were massacred at designated killing sites in or near
their own homes by predominantly local ethnic nationalist
militias who played the central role in their executions. Third,
the Holocaust in the East mobilized a considerable proportion of
the local population as co-perpetrators.
Burds, Jeffrey.
Holocaust in Rovno: The Massacre at Sosenki
Forest
,
November 1941
.

This is his set up and opening piece. I always wonder why people like him think that the Germans would have planned for 'deniability' when, even if they had holocausted the jews, they were never thinking about defeat and justice against them, during the time they were supposed to have been doing it.
'Of the four million Jews under Nazi control in WW2, six million died and alas only five million survived.'