There have been quite a few Holocaust survivors that have had registry numbers or just numbers tattooed on their arms. I've been privately discussing this with a friend and we've run into an impasse about this. We basically agreed that a tattoo is a permanent disfigurement, especially if the plan was to deport all Jews in the first place. What's more, our prisons don't tattoo registry numbers on their inmates even. What we would like to know is this:

1 - Why did the Germans do it if the plan from the very beginning was to deport all Jews? (This implies that the Jews were no longer people. Besides, we don't even tattoo people on death row.)
2 - Is it fake or is it real?
3 - What evidence is there in support of this argument and what evidence is there against it?

My friend and I would be grateful for any answers with documents provided.

P.S. - If this has already been answered, I would apologize for posting another topic on this and would like to receive a link to that topic.
It's better to act from the sidelines than to not act at all.
Top

Shade-Knight wrote:1 - Why did the Germans do it if the plan from the very beginning was to deport all Jews? (This implies that the Jews were no longer people. Besides, we don't even tattoo people on death row.)

The aim of the tattoos was to avoid identity thefts and administer properly numerous forced laborers.
"But, however the world pretends to divide itself, there are ony two divisions in the world to-day - human beings and Germans.” – Rudyard Kipling, The Morning Post (London), June 22, 1915
Top

Here is a three part article by Carlos W. Porter that might shed some light on the subject for you:

SHOW ME OR DRAW ME A

Here is a thread started by Callahan:

What about the tattoos?

viewtopic.php?f=2&t=7016
Maybe, just maybe, they believe what they are telling you about the 'holocaust', but maybe, just maybe, their contempt for your intelligence and your character is beyond anything you could ever have imagined. -- Bradley Smith
Top

Thank you for the quick replies, gentlemen. I shall begin reading this as soon as I can.
It's better to act from the sidelines than to not act at all.
Top

The tattoo thing is symbolic for the jews as a mark of holocaust experience and proof.

The first thing to understand is that it was only done at Auschwitz as far as I know. Even then not every inmate had a tatt done and that starts the questions running.

There are plenty of strange stories about tattoos done there and faked afterwards as a means to join the club and perhaps ensure compensation. CW Porter does an amazing job on this subject of tattoos.

In the end it's interesting but doesn't count much except when one looks at people like Elie Wiesel who clearly never had one and the lunatic Kitty Hart-Moxon who claims she had one, then after the war had it removed and pickled, so she would be able to decorate her lounge with it and show it off to all and sundry at cocktail parties.

Oh by the way here is what were recently claimed as the blocks used to tattoo people at Auschwitz. 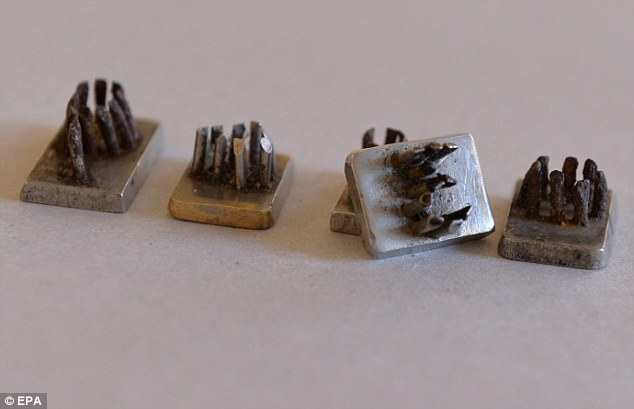 I heard they originally issued ID cards but switched to tattoo's because as someone else stated it stopped identity theft and made it permanent to track their labourers.

From a logical perspective there's nothing sinister about it at all. In fact, claiming to fraud it as such is an admission of a very weak case.
What are you angry about? By proving the gas chambers a lie, I just knocked off half the holocaust and SAVED 3 million Jew's for you!

I just saved more Jew's than Oskar Schindler allegedly ever did!