The Terms 'Final Solution' and 'Endlösung,' Growth in Usage by Year

The Terms 'Final Solution' and 'Endlösung,' Growth in Usage by Year

Hermod and I have been recently discussed Goering's dispute of the (English) term "Final Solution" (Endlösung) in a specific document at the Nuremberg Trial in 1946, which I took to have a wider significance, though hermod disagrees. (See the several posts beginning here: viewtopic.php?f=2&t=11203#p84110 that begin with Hermod writing "I think that Goering was just trying to disassociate himself from the term 'final solution,'..." [Thread title: "Hermann Goering dismisses holocaust claims at Nuremberg Trials"]).

For reference on the general 'rise' of the term Final Solution (in English and German), I present here some data from the Google-Ngram archive (which measures how often terms appear in published literature, by year, in all published material Google has scanned in; i.e., an enormous portion of all published material). I compare "Final Solution" in German and English and the more specific phrase "Final Solution to the Jewish Question" (first-ever appearance an internal party memo in early 1942, apparently referring to deportation of Jews if read literally, but now a cornerstone of 'code-word genocide' Holocaust historiography): 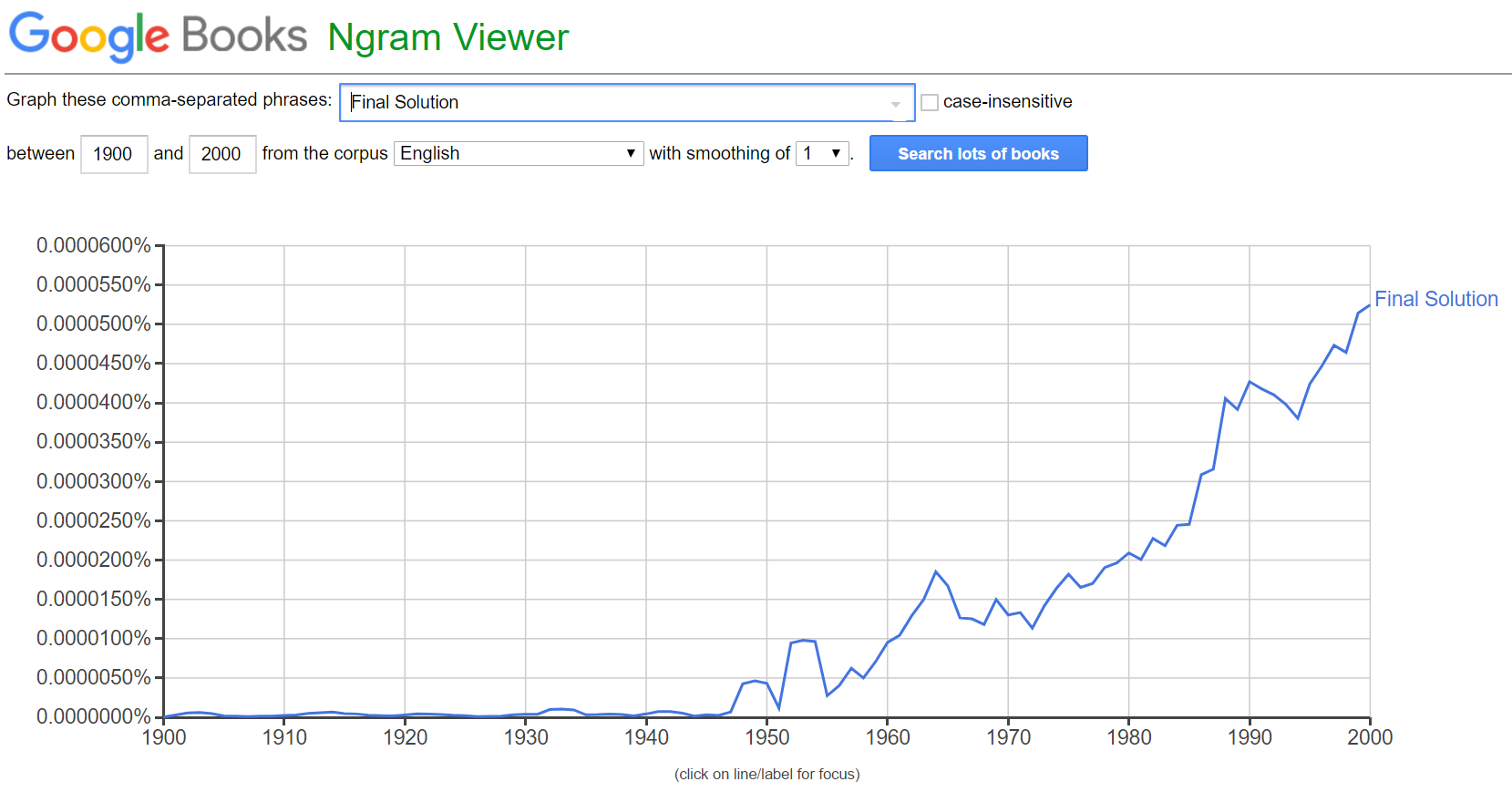 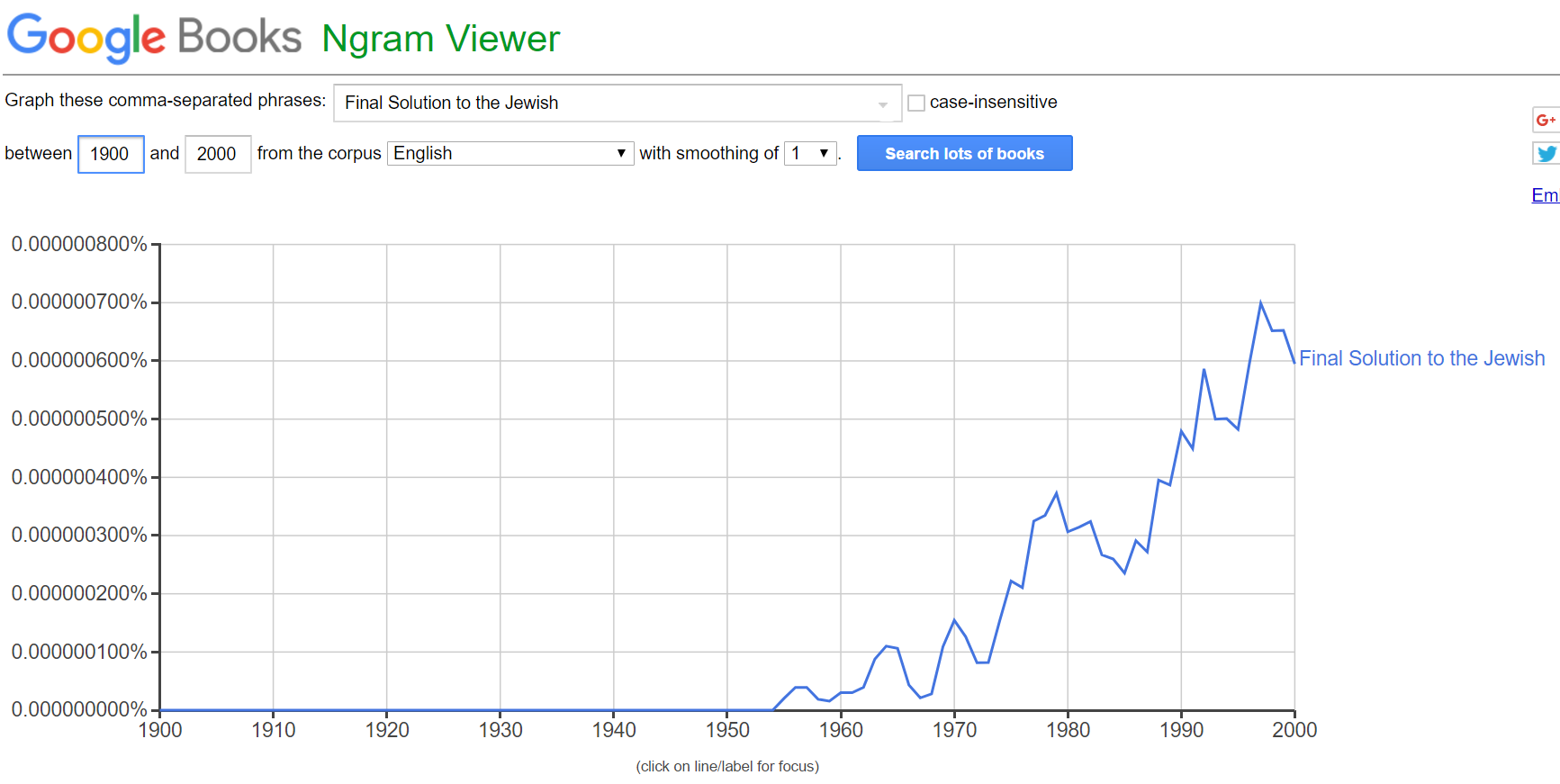 Endlösung (Link)
This term occasionally appears in German, at a low rate, from the early 1920s. Its rate of use was fairly consistent from the mid 1920s to the mid 1940s. What this tells me is that the memorandist who jotted down the term Endlösung in early 1942, its first-ever appearance in NS Regime internal writing, and potentially its coining as refering to the plan to deport the Jews out of German-oriented European territory, was using a then-current turn-of-phrase in German. There is nothing inherently sinister about it. (Here is one instance from the minutes of the Reichstag, 1923. The full text is not accessible but a Reichstag member is apparently using the term positively, to mean compensation to settle a matter for a group of constituents. Other appearances seem mainly technical, dealing with chemistry and engineering.)

Endlösung der Judenfrage (Link)
The term never appears before 1946. (I note here that the masses of semi-educated Holocaust Believers likely will often believe this term was common in Hitlerian rhetoric from the beginning, probably appearing already in Mein Kampf). Otherwise the same trend appears as with Endlösung. It rises again with the promotion of the Holocaust from the late 1970s, exceeding the peak of the Eichmann or Nuremberg spikes by the 1990s.

"Final Solution" (link) [English]
The same trend as in its German equivalent. Brief spikes in 1946-1947 and the early 1960s. It reaches much higher (comparative) heights, though, than the German Endlösung -- it reaches saturation level, we might say -- by the 1990s, when it appears at 10x its late-1940s usage and more than double its Eichmann Affair usage.

Final Solution to the Jewish (Question) [English] (Link) (Ngram only permits five-word searches)
Curious here is that the phrase "Final Solution to the Jewish [Question]") does not really seem to appear at all before about the late 1970s (first-ever appearance recorded in Ngram Corpus, 1956; often with no appearances at all in mid 1950s to mid 1970s). It emerges in English only following the Eichmann Affair. The critical year in its growth was 1978, when it grew over 5x in one year to reach its highest level ever by far, a rate it was regularly attaining by the 1990s.
The breeze is blowing
Top

The term "solution of the Jewish Question" is from Theodor Herzl's book "The Jewish state" (Der Judenstaat). In fact it's in the English subtitle of that book.

"AN ATTEMPT AT A MODERN SOLUTION OF THE JEWISH QUESTION"
https://archive.org/details/HerzlTheodo ... eEN190468S.


Of course you can now moan about the adjective "final" not being part of the title. But Herz'l was only making a suggestion here. It's not a full end product offered here. So "final" would be odd. For the Germans it was a different matter. Their solution didn't care that much about what the Jews would do as long as they were outside of their sphere of influence including their soon to become sovereign again neighboring states. They wanted the Jews out of there as a hedging against future war. Remember that Jews were among the first and foremost war mongers against Germany.
Top

Hektor wrote:The term "solution of the Jewish Question" is from Theodor Herzl's book "The Jewish state" (Der Judenstaat). In fact it's in the English subtitle of that book.

Thanks for this, Hektor. I note that this book was written in the 1890s and that Herzl was a German-Jew from the Austro-Hungarian Empire:

(from the Wiki for Theodor Herzl)
Beginning in late 1895, Herzl wrote Der Judenstaat (The State of the Jews). The small book was initially published February 14, 1896, in Leipzig, Germany, and Vienna, Austria, by M. Breitenstein's Verlags-Buchhandlung. It is subtitled "Versuch einer modernen Lösung der Judenfrage", ("Proposal of a modern solution for the Jewish question"). Der Judenstaat proposed the structure and beliefs of what political Zionism was.[77]

A Google search for the phrase "Lösung der *frage" (with quotation marks) yields 535,000 hits for me. On the first page none are related to the Holocaust. (Try for yourself as results may differ by country.)

Here is one example from the first page of the resutls I get. It is from long before Herzl still:

"Großdeutsche Lösung [der deutschen Frage]" (Greater-German Solution to the German-Question) (apparently coined by Eduard von Simson at the Frankfurter Nationalversammlung in 1848), =meant the inclusion of all German speakers, including "Austrians"/Catholics and subjects of the Habsburgs, i.e. those who could be of highly questionable loyalty to Berlin. Bismarck's preferred solution, which succeeded fully by 1871, was the "kleindeutsche Lösung," of excluding the Hapsburgs in Vienna explicitly and millions of their mainly-Catholic subjects. In other words, the two 'solutions' to the 'German Question' involved what the political nature of a (proposed pan-German) state would be, and various populations' places in it.

There is nothing really different in Herzl's usage of the same phrase in 1895, except that Herzl, the German(Austrian)-Jew, applied it to Jews. In other words, Herzl was using a phrase common in 19th-century political German.

Further, there is nothing leading us to assume any sinister change in meaning to these well-established terms by 1939, when some NS officials were using the term 'Frage' and 'Lösung' talking about a possible resettlement project for the Jews akin to Herzl's own. Both terms, 'Frage' and 'Lösung,' in these contexts remained current and common in German over many generations, it seems, with no real change in meaning. It just translates poorly into English is all.

I note, too, that this usage, as described above in the German Unification Era usage and the Herzlian usage of the terms/phrase "Lösung der *Frage," is still common in today's German, as we see here (from a quick Google News search)

Unless this Austrian news agency intends to say that the Greek head of state wants to genocide the Kurds, we can only understand this term ("Solution to the [Nation/Group] Question") to mean a settlement to the nature of a population's political place within (or outside of) a state. Independence for the Kurds? Yes or no? Uniting Kurds of Turkey with Iraq, etc. to form a pan-Kurdish state? Only a Turkish-Kurdish state? Or what?

This 2017 usage in a prestige Vienna newspaper carries the same meaning this phrase seems always to have had in German. No sinister overtones...unless the Nazis said it!
The breeze is blowing
Top

For info, Herzl and some other political Zionist pioneers sometimes referred to their grabbing enterprise in Palestine as a/the final solution to/of the Jewish question/problem because they were in competition with Jewish charitable organizations (which used to argue that the Jews of Russia just needed to be helped where they were, not to be moved to Palestine) and Jewish "Territorialist" benefactors such as Baron de Hirsch (who used to argue that the Jews of Russia needed to be moved to Argentina and other lands, but not especially to Palestine). According to the political Zionists of that time, such charitable organizations and "Territorialist" benefactors were offering only temporary solutions to the Jewish problem, while they (the political Zionists) were the only Jews offering a real long-term solution, a definitive and final solution. Herzl often used very harsh words when talking about those inconvenient rivals.

https://en.wikipedia.org/wiki/Jewish_Te ... ganization
"But, however the world pretends to divide itself, there are ony two divisions in the world to-day - human beings and Germans.” – Rudyard Kipling, The Morning Post (London), June 22, 1915
Top

Of course you can now moan about the adjective "final" not being part of the title. But Herz'l was only making a suggestion here. It's not a full end product offered here. So "final" would be odd. For the Germans it was a different matter. Their solution didn't care that much about what the Jews would do as long as they were outside of their sphere of influence including their soon to become sovereign again neighboring states. They wanted the Jews out of there as a hedging against future war. Remember that Jews were among the first and foremost war mongers against Germany.

Herzl did indeed use the phrase "Final Solution".

The only workable long-term solution, he said, is for Jews to recognize reality and live, finally, as a “normal” people in a separate state of their own. In a memo to the Tsar of Russia, Herzl wrote that Zionism is the “final solution of the Jewish question.”

The Jewish question, he maintained, is not social or religious. "It is a national question. To solve it we must, above all, make it an international political issue ..." Regardless of their citizenship, Herzl insisted, Jews constitute not merely a religious community, but a nationality, a people, a Volk. /2 Zionism, wrote Herzl, offered the world a welcome "final solution of the Jewish question."

"They don't jail you for lies. They jail you for truth."
If it can't happen as alleged, then it didn't.
Top
Post Reply
5 posts • Page 1 of 1