Larger bones remaining after cremation were crushed in a ball mill, whereupon they were filled into paper sacks together with the ash and buried in the surroundings of the forest camp, scattered or thrown into the Ner River. The ball mill was ordered from the firm Schriever and Company in Hamburg following an unsuccessful attempt to obtain a bone mill from the Łódź Ghetto’s Jewish council."

Here is the laughable, voracious, amazing capacity "bone mill" where the alleged bones of millions of Jews were alleged to have been ground up at Treblinka, Chelmno, Sobibor, Belzec. 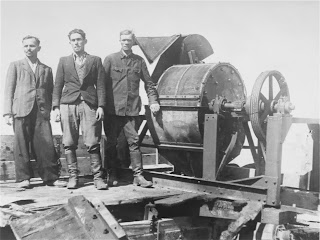 Plus, regardless of the bizarre claim made of a cement mixer

, it's needless to say we'll never see the authentic order from the 'Schriever and Co. firm in Hamburg' for this "bone mill". Nor will any of what would necessarily be thousands of tons of ash be found in the 'surrounding forest'.

The alleged '6M Jews, 5M others & gas chambers' is a farce and nothing is more indicative of that than this claim of utter desperation.
Roberto & Co. must try to hide the fact that there are no human remains as alleged to be found and seen.

Zionists are trapped and must invent bizarre, impossible, hilarious ways in attempting to cover their lies.

Re: Roberto Muehlenkamp and 'The Industry' say millions of Jew bones were ground up in 'bone mill' 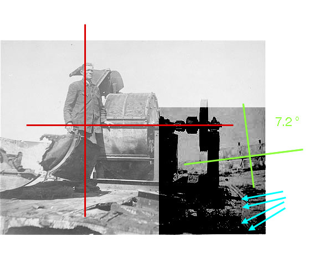 The research carried out by this author has shown that the machine was nothing but a normal ball mill which had been manufacted around 1890 by Grusonwerk, Magdeburg. For several reasons (a modification of the frame, damage sustained during the war and finally a “reconstruction” at the museum) it is not possible to determine exactly which of the several Gruson models the mill was, but we can state with certainty that it was not a fiendish invention of the “German fascists.” The available evidence suggests that the Soviet story of the “bone mill” is a pure fabrication. Nothing proves that the mill was found at the Yanov camp after its liberation in July 1944. What purpose the machine served during the war cannot be determined with certainty. Our best guess is that it was used to produce finely ground road stone and that it was probably stationed in a quarry or a road bulding yard.

“Evidence” as dubious as the “bone mill” of Lemberg is insufficient to support the story of the 100,000 or even 200,000 Jews murdered at Yanov Camp. Quite like the “gloves made of human skin” and the “soap made from human fat,” the “bone mill” is an invention of Soviet war propaganda. Up to now, the successor states of the Soviet Union have failed to jettison this mendacious legacy. Almost seven decades have elapsed since the end of World War Two. It is time for an objective analysis of this tragic period of European history.

The Comedy Show that is the 'holocau$t'.