I saw that Roberto posted this elsewhere concerning an alleged 'holocau$t' site in Lithuania, Semeliškės.

Roberto this time desperately shows us a fence around a few normal tombstones and claims the site is a mass murder burial location for thousands of Jews ... which he nor anyone else can show us an excavation and the alleged remains.

Does anyone see thousands of 'holocausted' Jew corpses?

So Roberto, here's yet another challenge, show us the alleged thousands of Jew corpses at Semeliškės.

'Hey, I have a Big Foot in my garage!
Believe me, I have a garage.'

Roberto and his creepy "Holocau$t Industry" in court:
'Please your honor, there really are remains of millions buried in huge mass graves, we know where the mass graves are, ... but, but, well, umm, we can't show the court. You must trust us, we're Zionists.

Odd that the claims are, once again, simply accepted and no excavation carried out. It looks like a grave yard to me and nothing more.

MASS GRAVE: In carrying out the order of the German local commander of July 2 1941, the Jewish community in Semeliškes (261 Jews) elected a twelve person Jewish council at the synagogue. Those elected were approved by the German Commander, chief of Semeliškes Rural District and of the Police Station in Semeliškes. In September, the Jews of Semeliškes were moved to a ghetto with the Jews from Vievis and a part of the Jews from Žasliai. They were guarded by local and policemen from Vievis, Žasliai and Žiežmariai. Tax exempt Jews were kept in the synagogue, school, and other large buildings for about two weeks. In early October, about 20 to 30 Security Police and SD special force policemen came from Vilnius with one German who examined the massacre site about 2 km from Semeliškes toward Trakai near the lake where trench was dug, but the German did not like the selected place, so he ordered a trench in another place on the edge of the forest. While the new trench was dug, the killers stayed in Semeliškes. The extermination of Semeliškes Ghetto was carried out on October 6. The policemen took 962 Jews (213 men, 359 women, and 390 children) to the massacre site in the morning. Other policemen guarded the trench. The special force took small groups of Jews to the trench, told them to lay down in the trench, and shot them. Killings lasted several hours. The shooters were drunk when they returned to Semeliškes. [March 2009]

If anyone succeeds in raising doubts they'll respond by erecting an expensive memorial at taxpayer expense to render all questions moot.
Top

cold beer wrote:If anyone succeeds in raising doubts they'll respond by erecting an expensive memorial at taxpayer expense to render all questions moot.

Yes, they will either pave over the area or place monstrous boulders all over the place to make and excavation, GPS use, etc. very difficult.
They will try to hide away the complete lack of proof.

For example this intentionally blocked 'mass burial site for 900,000 Jews' at Treblinka. 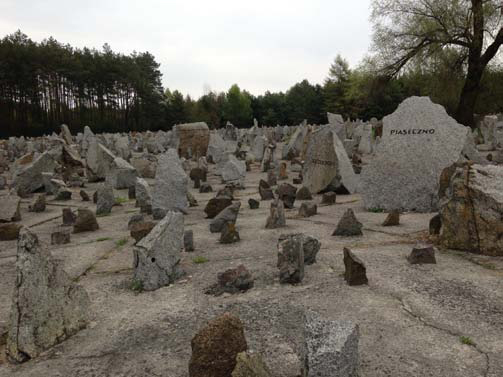 That is what liars do.
"The coward threatens when he is safe".
- Johann Wolfgang von Goethe
Top
Post Reply
4 posts • Page 1 of 1