Ok here it is:

The more "documents" are debunked, the better.

Yep, just make your own map and prove that Jews were systematically 'exterminated'. The little coffins are a nice touch. Pathetic.

I thought the Germans spoke in so called "codewords" about their alleged "secret" extermination plan.

Got mass graves? Got physical evidence?

an antisemite), educating believers is hopeless.

People once believed in a flat earth, witches, and sea serpents too.
People believe in this crap because they want to believe.

They're the loony ones.

The caption below the picture says:

Map from Stahlecker's report entitled "Jewish Executions Carried Out by Einsatzgruppe A" and stamped "Secret Reich Matter." It shows the number of Jews executed in the Baltic States and Belorussia in 1941. The legend at the bottom states that "the estimated number of Jews still on hand is 128,000." Credit: Latvian State Historical Archives, Riga

"The most frequently cited evidence is a collection of documents purporting to be daily and other reports of the Einsatzgruppen to Himmler and Heydrich for the period June 1941 to May 1942. Document numbers are 180-L - said to be a report of Stahlecker found in Himmler's files[352] - 2273-PS - said to be another Stahlecker report on actions up to January 31, 1942, "captured by Russians in Riga" (Stahlecker was killed in March 1942)[353] - 119-USSR, and many others, too numerous to list, most having numbers around NO-3000. Beside telling of regular anti-partisan activities, the reports tell of individual actions of mass executions of Jews, with numbers of victims usually running in the thousands. It is indicated, in most cases, that many copies, sometimes as many as a hundred, were distributed. They were mimeographed, and signatures are most rare and, when they occur, appear on non-incriminating pages. Document NO-3159, for example, has a signature of a R. R. Strauch, but only on a covering page giving the locations of various units of the Einsatzgruppen. There is also NO-1128, allegedly from Himmler to Hitler reporting, among other things, the execution of 363,211 Russian Jews in August-November 1942. This claim occurs on page 4 of NO-1128, while initials said to be Himmler's occur on the irrelevant page 1. Moreover, Himmler's initials were easy to forge: three vertical lines with a horizontal line drawn through them.[354]
In connection with these matters, the reader should be informed that, when examining printed reproductions of documents in the IMT and NMT volumes, a handwritten signature not be assumed unless it is specifically stated that the signature is handwritten; "signed" generally means only a typewritten signature. Document 180-L, for example, is reproduced in German in the IMT volumes, and excerpts in English are reproduced in the NMT volumes. In both cases signatures are indicated, but the actual document merely has "gez. Dr. Stahlecker" (signed Dr. Stahlecker) typewritten in two places.[355]"

Need a document to support your claim?

No problem, order yours from the Third Reich Custom Documents Shop:
http://www.thirdreich.ca/cudo.htm

Don't give them tips, Hannover.
Apparently they didn't even bother to use actual German maps for this one: 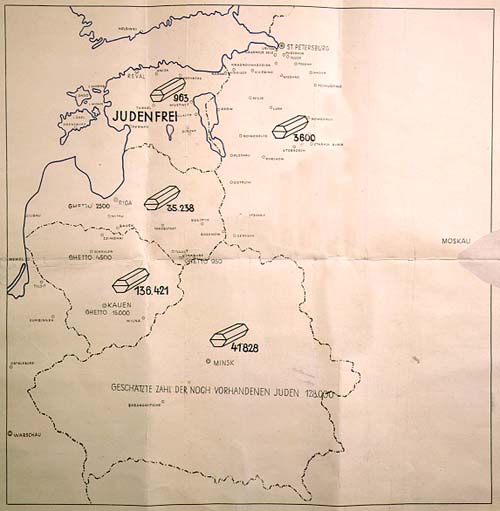 Because that map doesn't show the borders used by Germans then: