Forum rules
Be sure to read the Rules/guidelines before you post!
Locked
46 posts

Werd, all;
We have a thread on the death of Himmler, use it for that discussion:

Who killed Himmler?
viewtopic.php?f=20&t=7753
M1
Only lies need to be shielded from debate, truth welcomes it.
Top

it isn't exactly easy to "hang yourself" in German prison or detention. They take everything away from you that could be useful for suicide, especially hanging.

And how are we certain that was done that time? Or any other time?

I bet you believe that Himmler killed himself too. DUCK! Pigs flying past...

We know this, because it is standard procedure, so the burden of proof is on those that claim that it wasn't done.

I'd say that Heinrich Himmler (44 at the time) had more opportunity to commit suicide than someone in detention in a German prison would have. Karl Jaeger was about 70 at the time. I realize there are still some very fit 70 year olds, but don't know that in his case.

Perhaps there is more information available about the Jaeger "Suicide" case.

There is something on the last page that catched my attention:

Girls aged 13 to 16 were locked up because they, in order to get work, had applied for admission to the Communist youth. Here it was necessary, through drastic measures, to hammer the proper sense of direction into the heads of the responsible Lithuanian circles. The inhabitants of the prison were assembled in the prison courtyard and checked on the basis of lists and documentation. Those who as a result of harmless offences had been locked up for no reason were assembled in a special group. Those whom we sentenced to 1-3 and 6 months because of their offences were also specially set off, as were those who were to be liquidated, such as criminals, Communist functionaries, politruks and other such riffraff. In addition to the announced punishment, some, according to the offence, especially Communist functionaries, received 10 to 40 lashes with the whip, which were meted out immediately. After completion of the examination, the prisoners were led back to their cells. Those who were to be let free were led in a platoon to the marketplace and there, after a short speech in the presence of many inhabitants, let go. The speech had the following content (it was immediately translated sentence by sentence by an interpreter into Lithuanian and Russian): “If we were Bolshevists, we would have shot you, but because we are Germans, we give you your freedom.”

Jews aren't even mentioned to be liquidated. Now this maybe circumstantial. But this is actually the only page that got a stamp and signature on it:

The Einsatzgruppen matter seems to be far more difficult, because revisionism doesn't give this topic much attention.
Top

Well, anything is "possible". He could have been abducted by aliens too. LOL

But knowing the fact that so many Germans were in fact murdered while in custody makes your "possible" seem incredibly weak.

And what about the "Einsatzgruppen matter" do you think needs "attention"?

Considering that the claimed remains of ca. 2,000,000 Jews supposedly shot by the Einsatzgruppen do not exist as alleged simply demolishes the fake narrative.

Tell us what you have.

No enormous human remains as alleged, no 'holocaust'
If it can't happen as alleged, then it didn't.
Top

Wake up, Werd. It is THEY that claim that massive human remains exist in allegedly known places related to the Einsatzgruppen and the alleged 'death camps'.

Werd has been discredited so many times... I recently saw him insinuate on another forum that human remains could be made to magically disappear by throwing them up in the air "to spread them over a wide surface area in the hopes of having the ash not be seen."
Top

What I am saying is that is it not against the law of physics to say that one could cremate bodies, take the ashes and then throw them up in the air to spread them over a wide surface area in the hopes of having the ash not be seen.

In other words, it would be easier to spot ashes that are collected into a pile several inches high, as opposed to the pile being thinly spread out over the grass in a large area of square meters. Nevermind wind coming along and moving the ash debris across even more square meters. The comment was about the ability of the human eye to perceive ash right away with ease in different circumstances.
Everything I said was in response to this quote:

After grinding the bones we used to throw the ashes up in the air so that they would disappear, replace the earth on the graves and plant seeds, so that nobody could recognise that there was a grave there.

They wouldn't physically disappear into nothingness, so much as disappear from HUMAN SIGHT. That was my point. Hence my other quote you left out.

If they are spread out over a larger surface area, they probably would not be as noticeable; as say if they were a tiny mound.

The mass graves were opened and the corpses were taken out, to be consumed by the flames of huge pyres (the ‘roasts’). The bones were crushed and, together with the ashes, were reburied in the same graves.”
- Israel Gutman (ed.), Encyclopedia of the Holocaust, 4 vols., Macmillan, New York 1990, vol. 4, p. 1481-87

Yet there are no such enormous human remains as alleged .... in allegedly known locations. 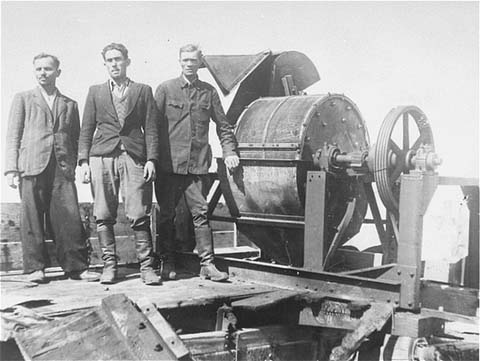 see:
The Bone Mill of Lemberg
By Klaus Schwensen
https://codoh.com/library/document/3220/?lang=en

No massive human remains as alleged, no 'holocaust'. The claimed '6M Jews & 5M others' is one helluva a lot of human remains to just 'disappear'. That's the size of the population of London.
If it can't happen as alleged, then it didn't.
Top

That is not my bone crushing machine and I possess a paperback copy of the issue of Inconvenient History that has that photo and refuted that whole Soviet claim of a bone crushing mill.
http://www.whale.to/b/mind_control.html
Top

Update:
Carlo Mattogno: The Einsatzgruppen in the Occupied Eastern Territories—Genesis, Missions and Actions.
(author's review completed; due to all the changes and additions, we proofread the whole thing one more time.)
ca. 830 pp. pb, 6"×9", bibliography, index

Observe how the page number has climbed. It used to be 775. Then it was 800. Recently 816. And now 830. I think they will have to split this up into two volumes like the Italian edition.
http://www.whale.to/b/mind_control.html
Top

Some people crack down, when confronted with over the top accusations - and nobody seems to believe they are innocent.
But of course that doesn't work always as in the Karl Muenter case:

Apparently he also "denied the Holocaust" in the interview. Or that's what some people will hear out of it.
Top

Werd if you wish to actually discuss the contents of the book now that it's out, please do so in a thread that is not about it's printing being supposedly slowed by HC. It's not slowed, it's out. Try a new thread.
M1
Only lies need to be shielded from debate, truth welcomes it.
Top

If it wasn't slowed, then why did Rudolf leave a notice up on the holocausthandbooks site for days not only saying that Mattogno was responding to a list of open issues "including critiques" from HC?

Why did he put up a new one a few days later saying "We started entering the author's corrections"?

Why did Mattogno and Rudolf leave out those two arguments that HC criticized about alleged discrepancies between the two different Jaeger reports that I mentioned on page 1 - namely the alleged discrepancy regarding a certain sum total of an addition of a bunch of numbers, and the issue with a certain letterhead that appeared on both reports?

Obviously Rudolf and Mattogno talked and they decided to leave some things out of the English translation that were in the Italian one.

So all evidence indicates that yes, comments made by HC, forced Rudolf and Mattogno to change a few things and delay the book by about a week or two. So what? The book is better and stronger now. Why do you object to these facts being known? Rudolf and Mattogno obviously aren't ashamed about it so why do you have to get angry on their behalf when they don't care?
http://www.whale.to/b/mind_control.html
Top

Cut the games, Werd. You're the only one angry here. Now you want to play Perry Mason over a non-issue. LOL

My comment above was about a post ca. 30 minutes ago where you were starting to discuss specifics within the book's contents.
No problem, but do so in another thread, as I requested. Please review that comment above.

Did HC comments about the Italian edition slow up the books release by a big week or two, or did the translation into English add to the slight delay? ... which you think is a big deal.

Frankly, who cares? It's meaningless. Talk about 'much ado about nothing', this is it.

So again, start a new thread on the book's content and away we go.
M1
Only lies need to be shielded from debate, truth welcomes it.
Top

Werd, I don't think Germar runs the official site - I checked the whois data a while back & it said that Michael Santomauro was the registrant/admin. This was after the series got the new Barnes covers circa 2010. That could account for the new upcoming volume on Pressac hasn't added yet.
Top

Werd seems to be more interested in a petty argument about a publishing timeline when in fact he should be addressing the awful weakness of his arguments concerning the false and ridiculous claims made of the Einsatzgruppen that were quckly revealed in this thread.
A time honored tradition of a weak argument is to distract from that weakness by slinging irrelevancies. That very much appears to be what we have here from Werd.
B.
Revisionists are just the messengers, the impossibility of the "Holocaust" narrative is the message.
Top
Locked
46 posts