For the first time in several months I have found a massacre during WWII, that I have trouble making a counter argument for. The massacre which I have found Genuine trouble in refuting is not a classic case of "6 million gassed" or "50,000 buried in Ukraine" In fact compared to many acts done by the allies it is rather small, with only about 191 being directly massacred (allegedly), but as I'm sure you can agree it's repercussions are still quite huge when it comes to discussing the "intentionalism" of the holocaust. The Mainstream Narrative of the Lidice Massacre goes like this:


First I will explain my current thoughts and counter arguments about the subject on the subject:

1. I have never seen a single document, speech, or video proving that Hitler himself ordered the attack The ONLY reason I even remotely suspect him is due to the scale of the "Destruction" phase of the massacre, and a lack of any reply from Hitler denying that he was involved (although admittedly this was at the same time the allies were claiming he was committing a whole myriad of massacres, It's quite possible he jsut got caught in all the lies and couldn't refute them all)
2.I do not believe the Fairy Tale that the children of Lidice were "Gassed" for reasons discussed in other threads on this website, which makes me question the Validity of the rest of the massacre. Especially the part about how "Every Last Man" was supposed to have been shot and killed
3.I am not sure how many of the men killed in the massacre were actually communist or partisan, and every article I've seen so far explaining the story seems to brush all German suspicions of Partisan Harboring under the rug. All they seem to do is say "There is no evidence of that they helped in Operation Anthropoid" and leave it at that without any further discussion.
4.This whole narrative seems to me like what the allies have similarly claimed before like in the case of the "Babi Yar Massacre" where they took Vigilante acts from German soldiers, and reprisals against partisans then exaggerated the numbers and claimed all the deaths were "civilians" without any real evidence. It also reminds me of all the other supposed massacres and "indiscriminate" village burnings in Poland that were also a result of Partisan activities occurring there, where all non partisans were moved safely towards the ghettos, and worker camps.
5.The actual story itself has many flaws when it comes to plausibility, with the thousands of ethnic Czechs who would end up becoming German citizens during the war, and many who even joined the SS themselves, It would make no sense to kill allies of the German Reich in such an indiscriminate way. Other examples would be how the Germans are supposed to be killing all the men without a flinch, yet for some reason give the women and children a pass. They try and act one second like the Germans are blood thirsty monsters then the next moment they somehow have a heart for all the innocent women who live there, despite going on to later gas the children. It just doesn't make since that the Germans could flip flop between sparing and indiscriminate so quickly during the massacre.

This is why I have started this thread, to get any further evidence, both for and against the existence of this massacre, and to get to the bottom of what truly happened after Operation Anthropoid. If there is anyone who has some sort of insight I have missed that could make the event here appear more clearly, please reply to this thread PLEASE reply to this thread and help me to get a true analysis of this alleged massacre.
Top

I have read a bit over the years about this so called massacre and on balance think it is probably correct in the general understanding of what and why things happened. It's not great shakes (bad for those caught up in it of course) and happened all over the place.

I'll give you one of many examples, and don't forget we the allies committed some very bad stuff too. Don't think we didn't.

A very small town, north of Bergerac in south west France, called Mussidan. In July 1944 a local unit of the resistance fighters ambushed a train load of German troops who were said to have been en route back to Germany from the Bordeaux region. Mussidan has a large train yard area to this day and the train was attacked as it rested there for a while during daylight hours. A major skirmish took place and a good number of German soldiers were killed and injured.

The following day the Germans rounded up 47 local men taking them into the football field in the centre of town. They were lined up and shot. I have been to Mussidan many times as I used to own a holiday home close by. There is a large monument to these men.

These things happen in war. It's a dirty business but your event at Lidice has nothing to do directly with the holocaust and has no relation to intent or otherwise in the claimed 6m dead jews in it.

Welcome by the way. Enjoy the journey, learn loads and always try to move the debate forward with every post.
'Of the four million Jews under Nazi control in WW2, six million died and alas only five million survived.'

- Reprisals were legal in WWII, the Allies engaged in them as well.

- The Lidice event has been grossly exaggerated and manipulated : the numbers alleged, no one was sent to Auschwitz, only men were executed, no one was gassed (there were no gas chambers).

- Like anything which can be twisted to comport with the false 'holocaust' story, the propagandists reveal their desperation when try of insert the Lidice reprisal into their impossible narrative.

Welcome, Hannover
If it can't happen as alleged, then it didn't.
Top

All the points you have made here are valid. The one thing I'd ask you both is if you believe the Germans genuinely did kill ALL of the men in Lidice. Due to a lack of evidence that I have seen so far, and with much of the story being grossly exaggerated I myself can't say I'm sure that they did. The same way the allies have lied about "All European Jews" being killed when it was almost always Partisan Jews who were killed, to me it seems quite likely the Allies have done something similar in this case, after all if all of the Men were supposed to have been killed it begs the question why they would even stop there.

I think it's quite possible a MAJORITY of men were killed due to suspicions of helping out partisans, but the idea that they intentionally walked in and started shooting any male over the age of 15 is something which requires more evidence to prove itself. This is especially true when you realize that it's more likely that some men were sent off the camps, as was done with all other people who were family members or harbors of partisans at the time, and as the narrative goes the only reason they destroyed the town in the first place was because it was a suspect for Operation Anthropoid

To me it doesn't really matter if something is "Illegal" or "Legal" to me it only matters if It's moral or immoral, after all at the end of the day the whole point of the holocaust is meant to go for your emotions and tug at your heart strings, and in war all is legal so long as you win at the end, The allies proved that with their atrocious acts Dresden and Tokyo, that history has ultimately swept under the rug..

Thank you for being so helpful and for replying to this topic which interests me, It is my hope that this comment will aid in finding out the TRUTH about what actually happened in Lidice.
Top

Recall that we have not seen an exhumation & examination of a mass grave that would necessarily exist and be known.

The truth is being hidden for a reason.

Yet another decent point to consider, although there were photos (with less than 191 men being shown debunking the original number) The rest of the bodies have never been found in any graves of any sort. Perhaps they were left out in the open and decayed naturally, but this seems to go against the original hypothesis during the holocaust of the Einsatzgruppen using mass graves to dispose of bodies after mass killings like these. 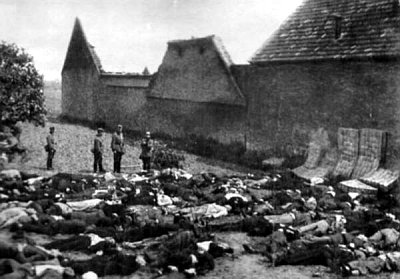 Both of these pictures show the same victims but appear to be from different angles.

Will all the other lies about the topic, like the false claim of children being gassed. and with the photographic evidence barely showing 1/3 of the original allied estimate of men killed, it seems quite likely that the whole operation was an Anti-Partisan Operation as the Germans originally suggested, something which was both completely moral and legal, to do during the war. It's very likely that all of the Men who were killed were suspected of aiding or harboring the Partisans, and that the rest not shown in any photos or later mass graves were simply moved to worker camps along with their families for the remainder of the war. After all it wouldn't be the first time the allies would have manipulated camp data records, or exaggerated motives and death tolls to push their agenda.
Top

Volksturm wrote:....[*]In retaliation Hitler has all the men aged over 15 be separated from the women and children,Every last male adult is killed and all of the others are sent off to Concentration Camps where the children are gassed
.....

Sometimes it's said the children were gassed in Chelmno/Kulmhof.

But what's the evidence for this?
Top
Post Reply
7 posts • Page 1 of 1