This is truly hilarious.
If the moon is to be a new dump for Zionist garbage then this makes sense.

"Testimony", labeled as such in an attempt to seem important and factual, as if it was cross examined and judged in a real court of law.
Of course the few times these liars did testify in court they were exposed as fraudulent, laughably so.
Not to mention the previous demolitions of the scientifically impossible, contradictory, and deranged nature of what is claimed in other informal "testimonies".

And naturally one has to wonder how much "Israeli technology" vs. what they have stolen the U.S. is involved here, and then how much U.S. taxpayers money is being used.

No alleged human remains of millions in allegedly known locations to see, no 'holocaust'.

Israel Is Sending Holocaust Testimony And A Torah To The Moon
December 19, 2018 By Jenny Singer
Israel's space craft is set to launch on Thursday night. by the Forward
Getty Images

The Israeli space craft is set to launch on Thursday night.

In the beginning there was nothing, and darkness hung upon the face of the deep. In 2019, there will be many things: Books of science, technology, art, and literature, children’s artwork, the Declaration of Independence, a Torah, the testimony of a Holocaust survivor. And, courtesy of Israeli engineering and Jewish philanthropy, they’ll all be on the moon.

One small step for Israel, one giant step for… actually it’s a giant step, period.

Israel plans to launch a spacecraft — dubbed Beresheet, Genesis — to the moon in February. If it succeeds, it will be the first Israeli space mission ever. It will also make Israel only the fourth country to land a spacecraft on the moon.

True to Israeli culture’s fascination with tech and space-saving innovation — pun intended — the items and texts included in the spacecraft’s time capsule will be digitized on three discs that will hold hundreds of texts, including 27 dictionaries, each in a different language.

The mission, a collaboration between SpaceIL and the Israeli government’s space organization, is the product of a long dream: SpaceIL was launched in 2011 by three Israeli engineers as a response to the Google Lunar XPrize challenge, which called for non-governmental organizations to race to land on the moon. SpaceIL became a top five finalist, but the competition ended in March, 2018, without winners.

The engineers decided to forge forth nonetheless, with a partnership with the government and funding from major Jewish donors, including Morris Kahn, Miriam and Sheldon Adelson, Sami Sagol, Lynn Schusterman and more, the Times of Israel reports.

The craft will launch from Florida’s Cape Canaveral. If all goes according to plan it will orbit the earth three times, then orbit the moon two times, making a soft landing on the northern hemisphere of the moon after two or two-and-a-half months.

Seems as though the moon is anti-semitic

Israel’s private spacecraft Beresheet crashed into the Moon on Thursday after being hit with problems during descent, denying the Jewish state a place in the elite club of nations that mastered a lunar landing.

“Small country, big dreams,” the engraving on the spacecraft’s body read, but those dreams weren’t destined to come true.

Beresheet’s engine stopped working around 10 kilometers from the surface, with the vehicle crashing into the Moon at a speed of over 130 meters per second. 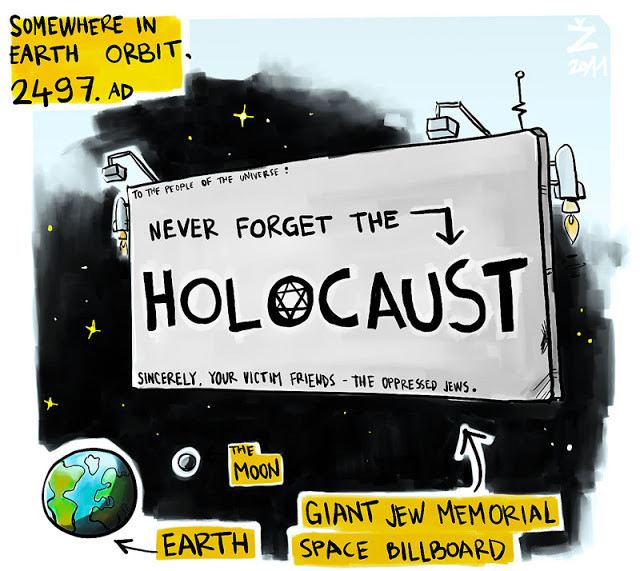 "Israel Is Sending Holocaust Testimony ..... To The Moon"

Now, that's what I call a real Moon Hoax!

So, the incompetent Israelis, who obviously did not steal NASA technology or at least not enough of it, who then added bogus "holocaust testimony", crashed their spaceship. LOL Symbolism & poetic justice galore.

The Usual Enemies of Free Speech will more than likely spin it into another reason to skim billions more from US taxpayers every year and to get taxpayer funding for another hate mongering Fantasy Theme Park, aka: 'holocaust museum', where only Jews get the the plum, fat salaried positions. While Jews demand massive 3rd world immigration into the west while maintaining a Jews Only immigration policy for Israel.

All of this on the backs of laws banning criticism of "that shitty little country", claiming that free speech is "anti-semitic", even though they have truly earned such criticism.

The 'holocaust' storyline is one of the most easily debunked narratives ever contrived. That is why those who question it are arrested and persecuted.
Only lies require censorship.
If it can't happen as alleged, then it didn't.
Top

"Israel’s private spacecraft Beresheet(Bear Shit) crashed into the Moon on Thursday after being hit with problems during descent, denying the Jewish state a place in the elite club of nations that mastered a lunar landing"

As I have said elsewhere this is laughable, the whole moon shot thingy by israel is laughable. They claim it was an israeli thingy but really it was with other people's money (isn't it always the same with that apartheid state?) it was on a US rocket launched from the US with British tech inside include the lunar module motor so I believe and it crashed because they wouldn't use the technology they were told to.

However the delicious thing for me is that all nuclear and rocket science was essentially stolen by the US using German Nazi military knowledge and skills. You couldn't make this stuff up.

But for me the cherry on the cake is that the ego of these people, their chutzpah, is beyond comprehension. What do they think the world will think differently about them had they put it on the moon? Why should we care if they think their God wants them to tell another planet about their invented holocaust and lies?

They failed but within seconds were turning failure into success of a great endeavour, because it was real in their minds...
'Of the four million Jews under Nazi control in WW2, six million died and alas only five million survived.'