TimeTraveler wrote:This thread has gone off topic because Wyatt doesn't wanna admit that the photo has been doctored. Wyatt is basically saying ( I've heard this before from exterminationists) that the photo was doctored by evil holocaust denier nazis. Then they'll show the "real photo" and if you look close you can still see the drawn in stretch armstrong Jew.

Wyatt posts this silly flashing photo as if it proves something when in fact it shatters the very story that he hopelessly is trying defend,

I mean there is literally this recon photograph showing 500+ person groups being marched into the krema 2-3 facility. (left side , south marching north and left side north marching towards the tree near the road)

As expected, Wyatt dodged this: 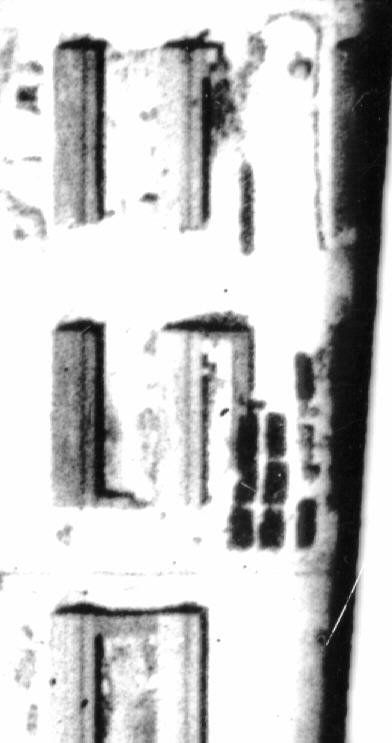 Which highlights the laughable tampering of those photos, his fake, drawn in 'marching Jews' have been placed on a roof top

and then from:
Air Photo Evidence Auschwitz Treblinka Babi Yar: https://archive.org/details/AirPhotoEvidenceAuschwitz
We see an enlargement of his photo which further reveals the penciled / drawn in nature of his ridiculous "500+ person groups being marched into the krema 2-3 ".

And then we have altered photos of the alleged 'gas chambers': 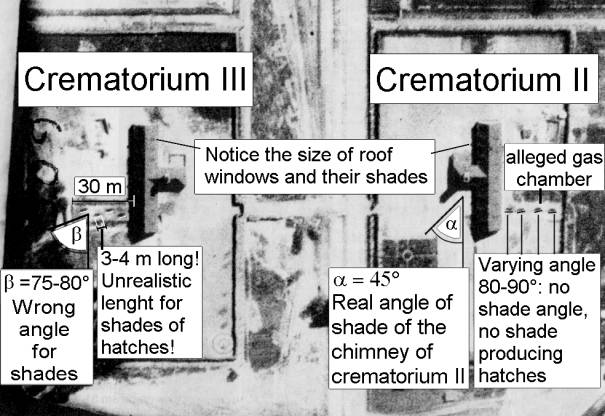 Much more here:
http://www.vho.org/GB/c/GR/RudolfOnVanPelt.html
and:
viewtopic.php?f=2&t=3249

1. Where were they supposed to go?
2. I thought they stayed in the camp?
3. The vistula river and the fields surrounding the camp. They were not buried. Unlike the reinhard camps. Every jew at auschwitz was burned and dumped.
4. You seem to think that because the labor camp existed there could not have been extermination facilities for incoming people. Very small brained. Especially when you know the germans used slave labor.
5. No i mean everything about the scientific arguments pans out. It works.
6. It was actually reconstructed before the war ended. krema 1 was a test bed for gassings , then turned into a air raid shelter/office. Russians then returned it to its "gas chamber" configuration"
7.I mean there is literally this recon photograph showing 500+ person groups being marched into the krema 2-3 facility. (left side , south marching north and left side north marching towards the tree near the road) 1_25Aug44_Krema23.gif
8. It was a labor camp of course there were survivors. They had to work in the factory.
9. People saying conflicting things doesnt mean something didnt happen. There are firefighters who claim they heard explosions on 911 but that goes against the fact that if they demolished the buildings everyone on the island would have heard the blasts.

1 & 2 - Wyatt doesn't know that although most of the prisoners left with the Germans in what they called "Death marches" a large number stayed behind. Various "eyewitnesses" talk about how they decided to stay behind or go. see: viewtopic.php?t=1372

3 - This is totally unproven, and also contradicted by various eyewitness testimonies. Of course, in Wyatt's conspiracy theory, he needs an explanation as to why there is no US football field worth of burnt remains piled 1 foot high (see: viewtopic.php?t=12278#p91264 ) so "They just all got dumped in the river" is the only excuse he can come up with.

4 - The absurdity of the alleged 'extermination' facilities proves they did not exist, as well as the lack of evidence

5 - Wrong, as shown repeatedly in this thread and elsewhere

6 - Convenient excuse. Maybe it was never used as a homicidal gas chamber then? Of course, there is no documentary evidence that it was, just cherry picked testimony

7 - So what? People marching through a camp doesn't prove they were being shoved into gas chambers. I am not sure why you think that it does

8 - Why did the Nazis leave so many "jewish eyewitnesses to gas chambers" alive if they were ordered to stop the gassings months before the camp was liberated? They had plenty of time to kill these jews, and, according to you, a strong desire to do it.

9 - Absurd argument, and no not necessarily everyone would hear a blast in a crowded city full of traffic noises when they were probably inside anyway. And yes, people saying conflicting things doesn't mean it didn't happen. At the same time, you're just ignoring all of the conflicts and picking and choosing what you want to accept. This is fraudulent. The majority of Nazis denied the alleged extermination policy, and the small % that did not gave conflicting testimony and were in many cases tortured. In other cases they made absolutely absurd claims probably in attempt to discredit their own testimony.

I am not surprised Wyatt hasn't returned. He makes so many ridiculous claims without even attempting to substantiate them. He is spinning a narrative to push his own ideology, one that has been used to justify hatred and intolerance against Germans and Whites/Europeans in general.
"There is a principle which is a bar against all information, which is proof against all arguments, and which cannot fail to keep a man in everlasting ignorance -- that principle is contempt prior to investigation."

wyatt wrote:Yes they are disposing of bodies in a giant pit outside of krema V.

Wyatt, if a "giant pit" really were dug at that location, could archaeologists, using modern geophysical tools and forensic science techniques, locate that "giant pit" today?

Wyatt, I have seen you use words like "destruction" and "disposing" in your posts. Are you trying to insinuate that the Germans were able to make jews magically disappear without a trace?
Top

Like I said. You really dont know anything about science or chemistry. Which is why all these guys went to jail and got humiliated in court.

Speaking of science and court Wyatt, do you have the courage, integrity and character to accept The $10,000.00 Holocaust Archaeology Hoax Challenge?

Additionally, and independent of the $100,000.00 Holocaust Archaeology Hoax Challenge, a $100.00 reward is being offered for each one of the 100 alleged graves / cremation pits in question that is proven - with the same standard of proof applied in U. S. civil courts - to actually exist and to currently contain the remains of - at least 2 people.

Note: Potential claimants may be required to post their submittal on an approved website - and successfully defend it. In such cases, they must also - publicly pledge to sue Mr. Gerdes in a U.S. civil court - (sans a jury and both sides pro se legal representation) if they refuse to accept a negative ruling.

What's wrong Wyatt, you're not afraid of getting humiliated in court, are you?

Edited to add: Correct me if I'm wrong Wyatt, but if my math is correct, the remains of just 2 people would be just 1 / 10,000 of 1% of the alleged buried remains.
Top
Post Reply
49 posts