We have claims of endless numbers of "survivors", yet the fake narrative says 'the Germans tried to kill every Jew they could get their hands on.'

These tall tales seem to become more ridiculous by the day.
As if these fake "survivors" are trying get bragging rights, 'My story is more absurd than yours, I win'.

And note that this story is really a promotional ad for an up & coming film. Follow the money.

Here we have a young boy who allegedly lived in the woods, in a hole in the ground all alone. No doubt E. Europe stopped having cold winters.
But wait, he then met another boy who was doing the same thing.
And then they allegedly found a baby in it's dead mother's arms. Then, just by coincidence of course, they allegedly found yet another "survivor", a woman who was also living in the woods, the woman then supposedly took care of the alleged child.

Cutting to the chase, he was then later & 'miraculously' reunited with the child'.

You also gotta love:
"Mr Smart is one of just 100 Jews that survived from Buczacz, from a previous Jewish population of 8,000."
Yet the necessary human remains do not exist. there is no proof whatsoever that 7900 Jews from Buczacz were murdered. None.

The nonsense is really piled high in this one. Read on, give us your thoughts.

No alleged human remains of millions to be seen in allegedly known locations, no 'holocaust'.

Holocaust survivor reunited with a baby he saved during WW2 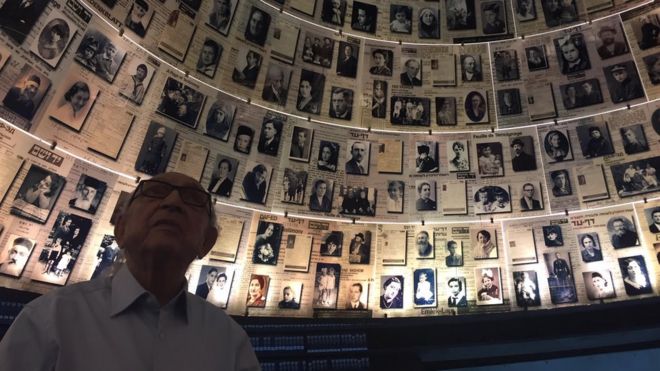 At the Yad Vashem centre Mr Smart honoured those who, unlike him, did not survive the Holocaust

Holocaust survivor Maxwell Smart has always wondered about whether a baby that he and a friend rescued during World War Two survived the conflict. A new documentary answers his lingering question.

Maxwell Smart was just nine when the war began. The boy from the Ukrainian town of Buczacz - then part of Poland - had his life turned upside down in 1939.

His story, and those of two other Canadian Holocaust survivors - Rose Lipsyzc and Helen Yermus- who are haunted by unanswered questions from their time as children during the war, is being told in a new documentary, Cheating Hitler.

Working with researchers, the filmmakers follow the survivors as they travel back to old hometowns, to killing sites, and to hiding places from the war as they seek out answers.

For Mr Smart, the experience includes meeting the extended family of a young companion who helped him survive in Nazi-occupied Poland.

And it helped to alleviate some of the guilt he has carried for decades over the boy's death shortly after the pair helped save the life of a small baby.

The Germans occupied his part of Poland in 1941. His father was killed within three months and the rest of the family was rounded up into a ghetto.

In 1943, he, along with his mother and sister, were being loaded onto trucks during the clearing of their ghetto. He fled on his mother's urging and never saw them again.

By age 13, he was living alone in the woods of Eastern Europe, hiding from groups of Ukrainians and Nazis searching for Jews.

He had dug himself a shelter in the dirt and was almost starving. After months alone, he came across another boy - Janek - walking in the woods in ragged clothing, and they became companions in survival.

Janek, who was a couple of years his junior, became a godsend who helped ease his loneliness.

They later discover the bodies of seven Jews in the woods but spotted something moving on the other side of a nearby river. They crossed the freezing water to find another body - a woman. But in her arms was a living, breathing baby girl.

They brought the child back to a shelter they had built but Mr Smart knew the child was a danger to their survival. In the woods Mr Smart found another Jewish woman who recognised the baby as her niece and took her into her care.

Soon afterwards Janek became ill and died. Mr Smart believed he was responsible for his friend's death because he had urged him into venture into the cold water to save the baby.

He says he felt a lifelong "guilt that I killed Janek for this baby and I don't even know where the baby is".

"That was the biggest loss of my life. This young little boy was such a help to me to survive the war. My mother was gone, my sister was gone, my father was gone. I somehow accepted it. I still cannot accept Janek's death."

Mr Smart did survive the next few months.

In 1944, he managed to connect with some Soviet soldiers, following them into Romanian and Hungary. In 1948 he came to Canada through the War Orphans Project, a refugee resettlement scheme administered by the Canadian Jewish Congress. He settled in Montreal and became an artist.
Image copyright Handout Cheating Hitler
Image caption The TV crew helped Maxwell Smart (second left) track down Tova (centre)

Only 6% to 11% of Europe's pre-war Jewish population of children survived the conflict, according to the Azrieli Foundation.

Mr Smart is one of just 100 Jews that survived from Buczacz, from a previous Jewish population of 8,000.

In his later years he began to speak and write about his wartime experience, feeling a responsibility to share it.

The makers of the documentary did not know if they would find the answers their subjects were seeking.

"We definitely wanted to feature survivors who had these lingering mysteries or unanswered questions about their past - we wanted it to have an investigative angle," said director Rebecca Snow.

Ms Snow and producer Steve Gamester still marvel that the mysteries were solved, despite the likelihood answers would have been lost to the chaos of war and the passage of time.

And they say it's extraordinary they not only found out what happened to the baby Mr Smart had saved but were able to reunite them.

With the documentary crew he travels to Israel and meets with researcher Natasza Niedzielska, who had documented the girl's fate. Her name is Tova Barkai. She survived the war and now elderly, lives in Haifa.

"There is a name attached to the baby. There is a life. The baby had a family. She is not anymore just a baby, she is Tova," said Mr Smart.

He was also able to find some closure on his friend's death.

He visits the Yad Vashem World Holocaust Remembrance Centre in Israel and tracks down members of the boy's family. He tells them the story of their time in the forest and how the boy died.

Cheating Hitler will be broadcast on 11 November on the History Channel in Canada, with plans for it to be aired at a later date in the US and the UK.

Survivor Maxwell Smart?
Agent 86? LOL
Yeah they really pile the nonsense high. And they just keep piling!
It's easier to fool people than to convince them that they have been fooled
Top

His friend was Agent 99

Have you read the writings of Rabbi Oshry, the ones he buried in Lithuania in a tin and recovered miraculously after the war, it's all part of the long history of story telling although we today might call it "bigging it up", it appears to be compulsive.
https://www.chabad.org/library/article_cdo/aid/275039/jewish/Responsa-From-the-Holocaust.htm
Top

forasanerworld "Bigging it up" implies exaggeration of something. For sure, this is routinely employed by hoaxers.
At other times, outright "talking shit" is employed, where there is no semblance of truth, not even the physical possibility of being true.
It's easier to fool people than to convince them that they have been fooled
Top

They should have ceremonies at the graves sites of the babies they claimed to have suffocated so that the Germans wouldn't find them hiding in the walls.
Top
Post Reply
6 posts • Page 1 of 1