Came across a German "Antifa" who felt he could defend the Holocaust. 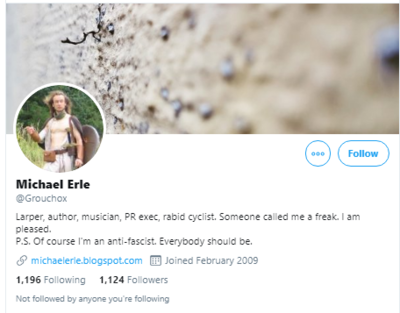 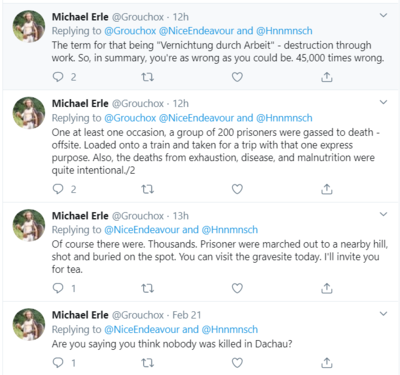 The discussion of the term "Vernichtung durch Arbeit" doesn't appear frequently on the forum or the CODOH library. I've checked and found discussion of this phrase rather wanting. It seems to come from a Nuremberg document 654-PS which has been discussed here: https://forum.codoh.com/viewtopic.php?f=2&t=9982&p=75556& and as usual there is an interpretation controversy. I checked all the Holocaust Handbooks and it hasn't as much been mentioned once in ANY of the books which is rather odd. But perhaps it's just such a small claim from one unverified document it isn't all that important. But it sure does seem to be important for the Exterminationists. I feel that no evidence is too small, all should be addressed adequately.

Hannover does post a quote with a brief mention of it here with an accompanying Goebbels diary quotation: https://forum.codoh.com/viewtopic.php?f=2&t=10708&p=80407& which when translated from the German into English (I used the DeepL translator, criticism welcome of course) says this:

The new Reich Minister of Justice Thierack gives me a lecture on his measures. He takes a thoroughly Nazi view. His way leads to filling the jurists with a new self-confidence, to giving the judge a new self-confidence, on the one hand to eliminate the useless elements, but on the other hand to strengthen the useful ones again. I promise him the greatest possible support from German journalism in this work. Above all, I think it is necessary that, in contrast to the past, where psychologically bad judgements were often published, now psychologically good judgements are published. Thierack wants to solve the question of antisocial elements by putting together the habitual criminals who have been sentenced to high prison sentences into punishment companies and sending them to the East. There they are to carry out work under the hardest conditions. Those who perish in this work are not harmed. However, I strongly advise them not to judge it mechanically and schematically according to the amount of prison sentences, but to let an individual assessment take its place. There are a number of cases in which severe punishments must be pronounced, but in which these are not elements that have become completely useless for state life. Thierack takes a very generous, but also National Socialist standpoint here. I believe he will be a good man to work with. In any case, I promise him to stop any criticism of German justice in the German press. First of all, we must give Thierack and his auxiliary organs a start-up period. In any case, he has the best will to carry out the order given to him by the Führer as soon as possible and in the most generous manner. Moreover, during his visit to the Führer's headquarters, the Führer developed for him exactly the same lines of thought that I recently set out in my speech to the People's Court.

Although this doesn't really address it, the context, no matter how small is important. Being killed intently through a policy via forced labour is different than saying that Prisoners will simply die because of labour. There's two interpretations here. However Michael seems to think this was a policy that was apart of the Final Solution. I don't think I would be unreasonably extrapolating with this assumption.

He claims 200 prisoners were gassed "offsite". I do not know what event this is referring to, but I assume that his "1000s were marched to a nearby hill, shot and buried" is a claim I'm not particularly familiar with either but sounds like an easily debunked fallacious argument used to promote the Holocaust by bullets narrative.

When he said "Hill" I immediately thought of "Babi Yar". So he could be referring to that as well.

Lastly he makes claims about supposed intentional "murder" though exhaustion, disease and malnutrition. These just seem like unsubstantiated claims pulled from thin air when wartime conditions could justly explain these circumstances. I provided the user with some facts in relation to food and water provisions posted here: https://forum.codoh.com/viewtopic.php?f=2&t=3763&p=95637#p95637 I will start another thread on this. I do not feel the two instances I quoted are the full extent of the care the National Socialists took in making sure their prisoners survived while travelling.

Don't expect this Antifa coward to show his face on the forum.

let this serve as another case study in the pompous ignorance of our enemies. They're so confident until challenged, then they cannot muster the courage to defend their untenable positions. Deep down I think they know it's phoney.
Now what does it mean for the independent expert witness Van Pelt? In his eyes he had two possibilities. Either to confirm the Holocaust story, or to go insane. - Germar Rudolf, 13th IHR Conference
Top

He seems a bit fixated on Dachau which these days is a but muh! Yes Dachau was there and it served as a detention camp for political prisoners and the original base for the SS in its early formative years. But in terms of the overall holocaust standpoint it has been a bit discarded.

The problem with this idiot is his ego. Just look at his self description. It's all ME ME ME ME ME. Virtue signalling all over the shop but in reality he is a Johnny Come Lately Antifa hard man who probably could fight his way out of a wet paper bag.
'Of the four million Jews under Nazi control in WW2, six million died and alas only five million survived.'

Michael Erle is apparently a believer in reality through consensus. If we all believe, it is true. He is apparently unaware that the medieval beliefs in witchcraft and geocentrism didn't, in fact, make them true.
Top
Post Reply
3 posts • Page 1 of 1