First, the ADL revealed its plan to censor speech that they hate through economic sabotage. But now, they've trotted out a bunch of senile "survivors" to prattle on about how if someone is allowed to say that Hitler didn't gas the Jews, that means they want to gas the Jews themselves. 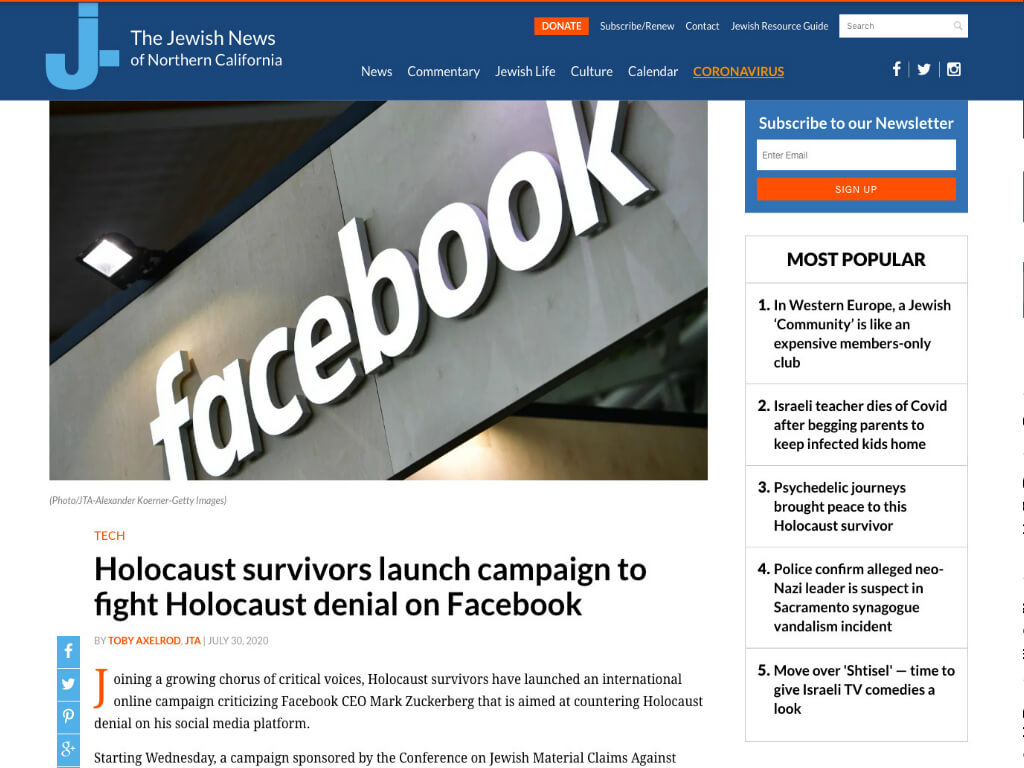 I get the feeling that Harry Smith is a true-believer who clings to the Good War myth (no doubt his father was a US military veteran called up during the war; I can imagine him saying "my father was in the military when they liberated the camps" even if his father was in Okinawa). I get the feeling that even if Harry Smith discovered 100%-proof that the Holocaust was not true, he'd still push it because it's too important to his own core identity, despite his being a White-Christian.
The wind is blowing

- Facebook has struggled with policing hate speech and divisive content for years, and a Wall Street Journal report from earlier this year revealed that Facebook executives have allowed the issues to get worse in the interest of growth.

That’s according to an August 10 report from the Institute for Strategic Dialogue, a British think tank. The report, “Hosting the Holohoax: A Snapshot of Holocaust Denial Across Social Media,” shows that Facebook not only hosts anti-Semitic content denying that the Holocaust happened, but that it continues to present that content to users.
[...]

This is a PDF of the "report"/"study" in question: 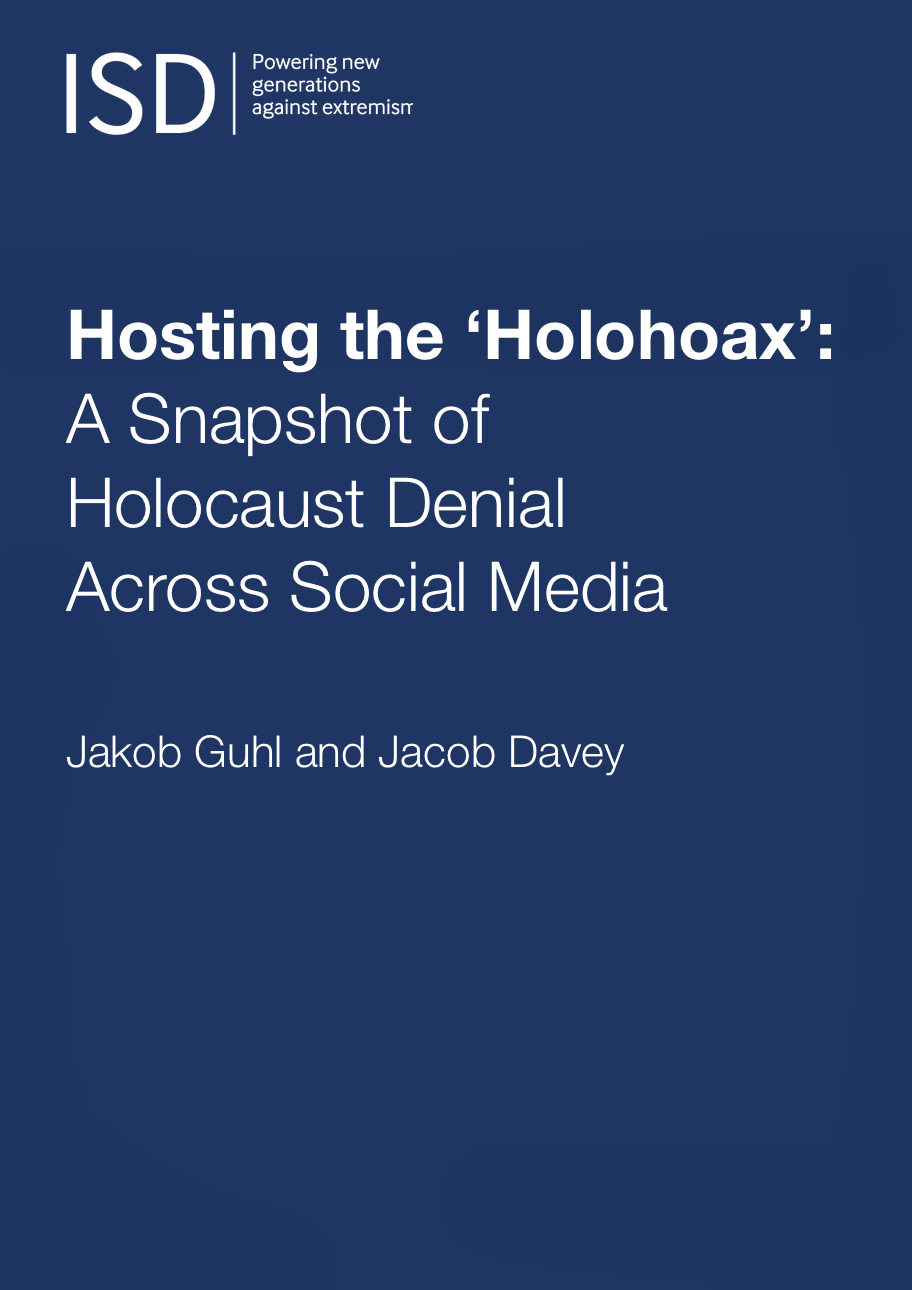 Hosting the Holohoax: A Snapshot of Holocaust Denial Across Social Media
http://web.archive.org/web/2020if_/http ... lohoax.pdf

Holocaust denial has long been one of the most insidious conspiracy theories targeting Jewish communities, with its extremist proponents drawn from across the ideological spectrum, from extreme right-wing to hard left to Islamist. Research has shown that digital platforms have only served to amplify and mainstream this warped strain of thinking in recent years.1 This briefing paper provides a snapshot of Holocaust denial content across major social media platforms. By analysing the term ‘holohoax’, which is commonly used by Holocaust deniers, this paper examines the extent to which Holocaust denial content is readily accessible across Facebook, Twitter, Reddit and YouTube. Although this study does not set out to provide a comprehensive overview of the phenomenon, it reveals important insights about how Facebook and Twitter provide a home to an established and active community of Holocaust deniers. While Holocaust denial is present on Reddit, our research suggests that such activity has been reduced through a combination of moderation efforts and pushback from other users. This paper also demonstrates how appropriately applied content moderation policies can be effective in denying dangerous conspiracy theorists a public platform by examining how Holocaust denial content has decreased significantly in the past year on YouTube.

• The Facebook pages and groups have a combined number of followers of 366,068 and an average number of members of 10,168.

Our analysis highlights how Holocaust denial content is actively recommended through Facebook’s algorithm:

Shifts in a platform’s terms of service are effective at limiting the spread of Holocaust denial content:

• By analysing the use of the term ‘holohoax’ we found that the spread of Holocaust denial content dropped significantly on YouTube following changes to their terms of service in 2019. If other platforms adopt similar policies then this would likely limit the spread of such material.

• While the number of posts on Reddit mentioning the term ‘holohoax’ has not decreased over the past two years, there are a number of factors that limit the visibility of Holocaust denial on Reddit, such as banning of subreddits dedicated to Holocaust denial, moderators deleting comments and pushback from other users.
[...]

Although only presenting a small case study around Holocaust denial, this paper provides a snapshot of how such content can be found on four social media platforms. Specifically the report highlights how Facebook, which has been unwilling to recognise Holocaust denial as a form of hate speech against Jews, has a small but well-established and ideologically diverse community of Holocaust deniers on its platform. We also found that Twitter similarly contains a small but persistent level of conversation denying the Holocaust.

The research highlights how YouTube, which recognised the denial of well-documented violent events as a form of hate speech, was effective in limiting the spread of such content on its platform after it banned posts that deny the Holocaust. The implications of similar policy design at Reddit are also notable: while potentially less effective at removing specific pieces of Holocaust denial content on the platform, the community-level policy for quarantining spaces dedicated to such content seems to have been effective at demoting Holocaust denial content for new users, to the extent that it is now not easily discoverable. The platform was also identified as a forum in which counterspeech was accessible where Holocaust denial content was identified.

These findings point towards several key recommendations, which could be effective in limiting the spread of Holocaust denial content. Primarily, they suggest that companies should implement amendments to their policies, in line with companies like YouTube and Reddit, and recognise how historical disinformation is used as a tool of hate speech. Comments made by Joel Kaplan suggest that Facebook’s decision to keep Holocaust denial content on its platform is in part driven by a conceptual blind-spot in its understanding of such issues – such activity is primarily seen as an issue of historical accuracy rather than a direct weapon used by individuals targeting minority communities. Recognising genocide denial as a form of hatred could have a significant impact on the prevalence of hateful content targeting minority communities online.

There is a range of policy responses and sanctions possible for Holocaust denial content, as displayed by the approaches taken in the YouTube and Reddit cases. Removal of content or channels is one option; a less robust response is to down-rank Holocaust denial content or channels to ensure that they are not recommended to or searchable by new users. This is more in line with Reddit’s current approach to the problem, though still enables hateful antisemitic content to remain online. ISD’s research showed how Facebook’s content recommendation algorithms can actively point users towards Holocaust denial content: preventing its recommendation to users would be the minimal first step that Facebook could take in order to reduce the visibility and accessibility of such content.

As well as changes of policies around hate speech, observations of platforms made in this study also point towards other areas of programming which could help limit the spread of Holocaust denial content. On Reddit, our researchers observed how community counterspeech had been effective in hiding and discrediting the Holocaust denial content that we identified. Investing in community-focused campaign work, such as the recent #NoDenyingIt campaign launched in July 2020,21 could help to raise awareness among the users of the platform and inspire community pushback against those engaged in Holocaust denial. In the long term, well-established Holocaust education organisations can play an important role in promoting digital civility as a component of their educational materials, to empower new generations to push back against those perpetrating hate against Jewish communities online.