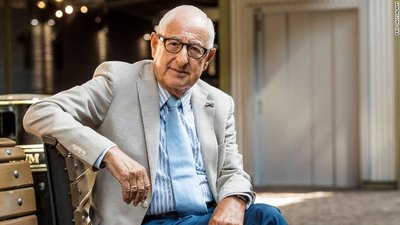 [above] Dutch Holocaust survivor Salo Muller is seeking
redress on behalf of victims who often had to
pay railway fares for their own deportations.

(CNN) A Dutch Holocaust survivor whose parents died at Auschwitz is demanding compensation from Germany, as well as from the country's rail network, which transported Jews to Nazi concentration camps -- often at their own cost.

In 2018, Salo Muller successfully lobbied the Dutch state-owned railway company for an apology and compensation to victims and their surviving relatives who were transported on its trains toward Nazi death camps during World War II.

Nederlandse Spoorwegen agreed to settle the case with 500 survivors and thousands of their direct descendants. 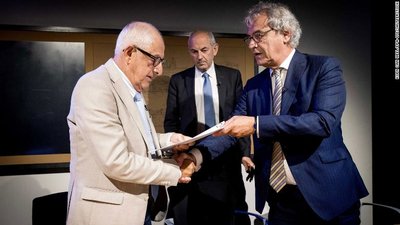 Now the 84-year-old, a former physiotherapist for Amsterdam's Ajax football club, has written to German Chancellor Angela Merkel and is seeking compensation from her government, as well as from the national railway company, Deutsche Bahn.

According to Muller's own website, his parents were taken to the Westerbork camp in the northeast of the Netherlands in 1941, when he was 5 years old. From there, they were taken to Auschwitz, where they were killed. Muller's mother had been picked up in a raid shortly after she dropped him off at kindergarten; he spent the rest of the war in hiding.

According to the United States Holocaust Memorial Museum (USHMM), the Dutch government set up the camp at Westerbork in 1939 to hold Jewish refugees who had entered the Netherlands illegally, many from Germany.

Between 1942 and 1944, following the German invasion of the Netherlands, Westerbork served as a transit camp for Dutch Jews before they were deported to Nazi death camps in German-occupied Poland. 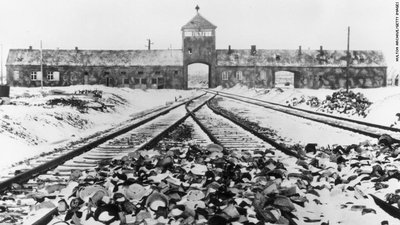 [above] Snow-covered personal effects of those deported to the Auschwitz
concentration camp litter the train tracks leading to the camp's
entrance, in an image from around 1945.

Muller's lawyer, Axel Hagedorn, wrote in his letter to Merkel that the case centers on the "Jews, Roma and Sinti, who were transported by the railway trains to the Westerbork concentration camps and then taken by the Nazis to the extermination camps in Eastern Europe by train."

Dutch Jews were often forced to pay for their transportation, which netted the German railways millions of Reichsmarks between 1941 and 1944, Hagedorn wrote.

"This inflicted suffering becomes particularly reprehensible, when you know that the transported Jews had to pay the transportation costs themselves," he added.

Hagedorn told CNN that there are varying estimates of the money the railway earned in this way, but that he could not be sure of an exact amount.

In Holocaust-filtered reality, Deutsche Bahn's finances in 2020 depend on some Dutch Jews paying fares for their own deportations in 1941.

This story (a man seeking -- and will get, I am sure -- a payoff from Deutsche Bahn for rail deportations in 1941) is one of those "Holocaust-as-'Twilight Zone'" kind of stories. It is close to what a Revisionist satirist would come up with.

It's less crazy in its proper place: It's the kind of story you see in the Western "system"-media regularly in our time. Its job is to reinforce the Holocaust as Founding Myth in people's minds. Founding Myths touch on the religious instinct; religion need not quite make sense. I guarantee that Germany's rail network mas a major, major net loser of the war -- rail lines being of strategic importance, they would have been targeted by both air and ground attack. But all history of the 1930s to 1945 is Holocaust history now, and the details of the rest don't matter.
The breeze is blowing
Top

Never again! enough!
It's easier to fool people than to convince them that they have been fooled
Top
Post Reply
2 posts • Page 1 of 1