The Untold Story of Jewish Resistance During the Holocaust 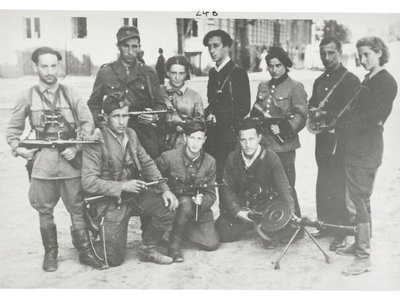 During World War II, Jewish resistance fighters launched attacks, created underground networks, led rescue missions and documented their experiences at great personal risk. But though historians have ample evidence of such acts of defiance, the idea that Europe’s Jews didn’t fight back against the Nazis persists. Now, a new exhibition at the Wiener Holocaust Library in London seeks to honor these individuals’ largely unheralded contributions.

“Jewish Resistance to the Holocaust” draws on documents, artifacts and survivor testimonies, many of which were gathered by library researchers during the 1950s. The show tells the stories of Jewish partisans in the Soviet Union, organized resistance in concentration camps and ghettos, and individual instances of bravery, among other topics.

“Sometimes the view that people have is that the Jews didn’t really resist, and people have commented on ‘why wasn’t there more resistance?’” senior curator Barbara Warnock tells the Guardian’s Caroline Davies. “But in these incredibly extreme circumstances there are just so many examples of resistance, even in the most desperate situations.”

One example is a domestic terror attack:

In May 1942, the Baum Group led an arson attack against the Soviet Paradise, an anti-communist, anti-Semitic exhibition that attempted to justify the Nazi invasion of the Soviet Union

The kinds of "resistance" it shows among concentration camp inmates are:

some prisoners undermined Nazi efforts to eradicate their culture by continuing religious practices and education [...] [and] diaries served as one of the most explicit ways in which individuals could “keep a sense of their humanity” and document Jewish experiences.

Filip Müller, for instance, smuggled evidence of Nazi atrocities out of Auschwitz-Birkenau while working as a member of the Sonderkommando

“Jewish Resistance to the Holocaust” is on view at the Wiener Holocaust Library in London from August 6 to November 30.

In May 1942, the Baum Group led an arson attack against the Soviet Paradise, an anti-communist, anti-Semitic exhibition that attempted to justify the Nazi invasion of the Soviet Union

And for no reason at all, the National Socialists saw a link between Jews as the incubators of Bolshevism! (Sarcasm).

To any logical person with eyes to see, it is obvious that Jews were the "tuberculosis bacilli" carrying Communism with them everywhere they went. Adolf Hitler, although the academic establishment would loathe to admit it, was utterly and totally correct, as per usual, in his description of Jews and their behavior.

There's a vacuum for each question the Holocaust Industry trot out. On the one hand they cannot ever allow Hitler or any National Socialist to be right about anything, least of all about Jews. But because the establishment on the other hand, are basically just dispensers for Jewish interests, and thereby Bolshevism of which the academic establishment is renowned for nowadays, they end up glorifying the Jews for doing exactly what Hitler said that they were doing, and attacked them for. Rightfully he did so. Attacking the Soviet Union was undeniably the right moral move, even if unprovoked. The dichotomy of whether it was or wasn't provoked, or whether it was a preventive war - is to distract from the larger moral question. In this dichotomy the Soviet Union is victimised or villainised, and it relies on Revisionists accepting this moral dichotomy as the politically motivated Marxist academic establishment insist. To throw out this dichotomy is to make clear the motives of the "Historians" who end up looking totally untrustworthy. After all, why defend the Soviets? What exactly is their redeeming qualities? They have none. Except for what the establishment has tried to pass onto the public, which is their invention of the Holocaust narrative; in which the Soviets, and thus Jews, have a big part given to them in having "destroyed" a Germany, who is in the role of perpetrator, thus punishing them, and preventing any further "annihilations" of Jews. Who else could then be the hero other than the Soviets? Who then could morally dispute the existence of Soviet Communism over the National Socialists?

The moral tendrils tighten around our necks, because everyone has been incapacitated and forced by way of their own logic, to the accept all of this as reality. The end result is a National Socialist Germany which can never be redeemed, or display any redeeming qualities. Thus the desire for objective academic scholarship on behalf of a dictatorship who lacks any kind of sympathy from the broader public, can be besmirched in academia without so much as a word against them. What then has been created, is an invincible political weapon that took nearly a century to forge.

Is there truly any reason left to avoid seeing the evidence of politically motivated narratives which is right up in our faces?

Jews, because any authority knows full well the public will sympathize with them, push sympathy and identification with Marxism/Communism, using this method It's quite tactical, for they can also contrast the Soviet Union, which is the worst state to ever have existed on earth; as something more preferable in the eyes of the public than it would otherwise seem if judged on it's own merits. They need this contrast to mitigate the horrors of Communism, and to exemplify as the "worst" despite the facts, Hitler's National Socialist Germany. Germany was undoubtedly much more honest and free than Soviet Russia, you'd be hard pressed to find anyone who could say otherwise. Germany, unlike the Soviets, had the moral upper hand against the Allies the entire time. The establishment has trouble finding much to contradict this beyond pushing the narrative of "German Aggression" considering they could not dispute any of the German claims. So the goal posts are shifted.

Barbarossa is pathologized into a Soviet victim/victory narrative when sympathy for the Soviets is already stretched thin, and would be totally without sympathy had the academic establishment not so thoroughly lied and submerged the public in lies about an alleged Jewish "Holocaust".
Now what does it mean for the independent expert witness Van Pelt? In his eyes he had two possibilities. Either to confirm the Holocaust story, or to go insane. - Germar Rudolf, 13th IHR Conference
Top

This issue has always been a problem for them. The “paradox” of why Jews didn’t resist their own extermination. I believe this has long been a hot topic in mainstream holocaust “scholarship.”

The real answer is that despite the rumors and propaganda from Zionist and Communist sources, the Jews themselves do not seem to have taken their own claims seriously. I would suggest that’s because the stories were not credible.

There’s some sleight of hand here where they are trying to use the partisan warfare on the Eastern front to say Jews did resist more than is commonly appreciated. Normally that isn’t something they emphasize because it undermines their Einsatzgruppen narrative. But it’s beside the point because the real question is why the Jews went along obediently to the camps, let themselves be packed into a gas chamber with thousands of other people, why the sonderkommandos participated, why they didn’t figure it out after the first million or so were “deported,” etc. The partisan warfare doesn't explain any of those problems.
Top

The short of it:

The "partisans" were in fact illegal under international law, they were considered terrorists.

Such unofficial, improperly uniformed combatants were subject to legal execution when caught. Both the Allies and Axis powers engaged in such executions.

And of course legal executions of "partisans" / terrorists who were Jews are ridiculously considered 'holocaust' murders.

Archie wrote:This issue has always been a problem for them. The “paradox” of why Jews didn’t resist their own extermination. I believe this has long been a hot topic in mainstream holocaust “scholarship.”
....

Mind you that in this narrative deportation and internment are translated with "extermination" already.
There wasn't a lot of "resistance" against this, of course. Legally this was in the same category as taxation, conscription or any other form as government intervention.
Top

Archie wrote:This issue has always been a problem for them. The “paradox” of why Jews didn’t resist their own extermination

This is related to the other Holocaust paradox you often hear, "Why did Germans go along with the Holocaust?"

The Holocaust narrative is so weak and un-defensible given open debate that the people within it all become absurd caricatures. But because it was installed as civic religion, only heretics dare poke holes in the caricatures.

As for "Why did Germans go along with the Holocaust?" -- If you are educated in the US or one of its cultural satellite states, you were subjected to long philosophical discussions at various points in school and university that revolve around the phrase, "Just following orders." Or maybe they are best described not as philosophical discussions, frankly speaking, but theological. This also applies to the "Why did the Jews not resist their own extermination" paradox.
The wind is blowing

This is related to the other Holocaust paradox you often hear, "Why did Germans go along with the Holocaust?"

To begin to understand this area you first need to accept or agree of what the sentence means.

Going along with what?
'Of the four million Jews under Nazi control in WW2, six million died and alas only five million survived.'