Australia is going down as well.

Australia is going down as well.

"Interesting time in Jerusalem with DANIEL ANDREWS the Premier of the Australian state of Victoria.

"Daniel Andrews told me he feels 'at home' here.

"Andrews pushed Aussie-Israel ties by opening a trade office for his state in Tel Aviv and exploring Israeli tech.

"He enthused about Tel Aviv, as 'the biggest innovation hub outside of the United States', the 'economic powerhouse of Israel', and said: 'There is no better place for Victoria to do business.'

"As we stood together at Yad Vashem: World Holocaust Center, Jerusalem, after a tour, the Premier spoke to me about the inspirational Holocaust survivors of Victoria, who 'contributed so much, helping to build a modern Victoria, helping to give hope and opportunity to so many people.'" 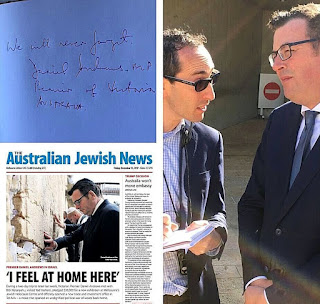 Re: Australia is going down as well.

Dan Andrews has been letting Africans run wild in Victoria for the past few years. And the police have done nothing.

Only now is Andrews getting torn apart for matters completely unrelated to the injustice he has forced Australians to suffer. When I say Australians, I mean whites.
Now what does it mean for the independent expert witness Van Pelt? In his eyes he had two possibilities. Either to confirm the Holocaust story, or to go insane. - Germar Rudolf, 13th IHR Conference
Top

Re: Australia is going down as well.

It is happening everywhere, the immigrant was weaponised a long time ago. This Dan Andrews is just another disposable front, he won't make any real decisions, he'll do as he's told for a golden handshake, then another piece of talentless, treasonous crap will take up the reigns when he's gone.
Top
Post Reply
3 posts • Page 1 of 1