Twitter recently announced similar to Facebook that it will also boot revisionists. This is not new, considering the fact that the CODOH revisionist Twitter page has long been banned.

Mark Zuckerberg and Jack Dorsey, along with the ADL, tread on free speech as though it were a sidewalk. They should be charged for treason, and punished accordingly.

Encouraged @Twitter is confirming that #Holocaustdenialism = #antisemitsm and they will push it off the platform. Ultimately @ADL will monitor how policy is enforced, but thanks @Jack for taking this step forward.

Facebook’s updated policy doesn’t extend to denials of other genocides, such as the Armenian or Rwandan atrocities. However, such denials appear to be prohibited under Twitter’s glorification of violence policy.


“We strongly condemn anti-semitism, and hateful conduct has absolutely no place on our service,” the spokesperson said in a statement. “Our Hateful Conduct Policy prohibits a wide range of behavior, including making references to violent events or types of violence where protected categories were the primary victims, or attempts to deny or diminish such events. We also have a robust ‘glorification of violence’ policy in place and take action against content that glorifies or praises historical acts of violence and genocide, including the Holocaust.”

According to Twitter, it uses a human rights framework to guide its policy decisions. The framework covers issues such as reducing hateful conduct, protecting human dignity and promoting tolerance and respect. The company says it works with a number of partners to tackle anti-Semitic conduct on the platform including NGOs, the Jewish community, governments and civil society partners.

Re: Twitter says it will remove Holocaust denial tweets

This is probably a bigger loss than Facebook. I've seen lots of revisionist stuff on Twitter and as a medium I think it's one of the better ones for revisionism. Obviously it's too choppy to get into depth on anything but it's ideal for spreading memes and piquing interest. For a while now Twitter has been limiting the reach of right wing accounts but they've been probably a little more lenient as far as outright removal of content.

Of all the platforms, I think YouTube was the most useful and valuable to revisionists. Just imagine if they'd allowed Denierbud's videos, Eric Hunt's videos, David Irving speeches, to rack up views. Then we had a period where they limited it some but didn't remove it entirely. Now it's all gone and it's close to useless as a revisionist platform. I guess someone could try to make videos that are only subtly revisionist or leave carefully worded comments on orthodox holocaust videos. That's about it. Losing YouTube was a huge blow and will probably set us back a few years. After YouTube, I think Twitter is probably the next most useful.

Google search might be the biggest problem of all. Not that long ago you could still get good search results. Now the results on holocaust related searches are very noticeably "curated." That will seriously hamper our ability to reach a wider audience. CODOH and Holocaust Handbooks are great second stage materials but the way it's going you will only be able to find them by typing in the URLs.
Top

Re: Twitter says it will remove Holocaust denial tweets

Archie wrote:Google search might be the biggest problem of all. Not that long ago you could still get good search results. Now the results on holocaust related searches are very noticeably "curated."

It's not just Holocaust-related content, Google has become almost unusable for anything politically incorrect. The results are heavily skewed. They have been caught totally removing some conservative sites (such as Breitbart) and they just called it a "glitch"

What is curious to me is Facebook decided to ban revisionist content at this time and why Twitter announced it as if they weren't already doing it. Are they not busy enough censoring content critical of Biden/Harris and the "official" narrative on Coronavirus? 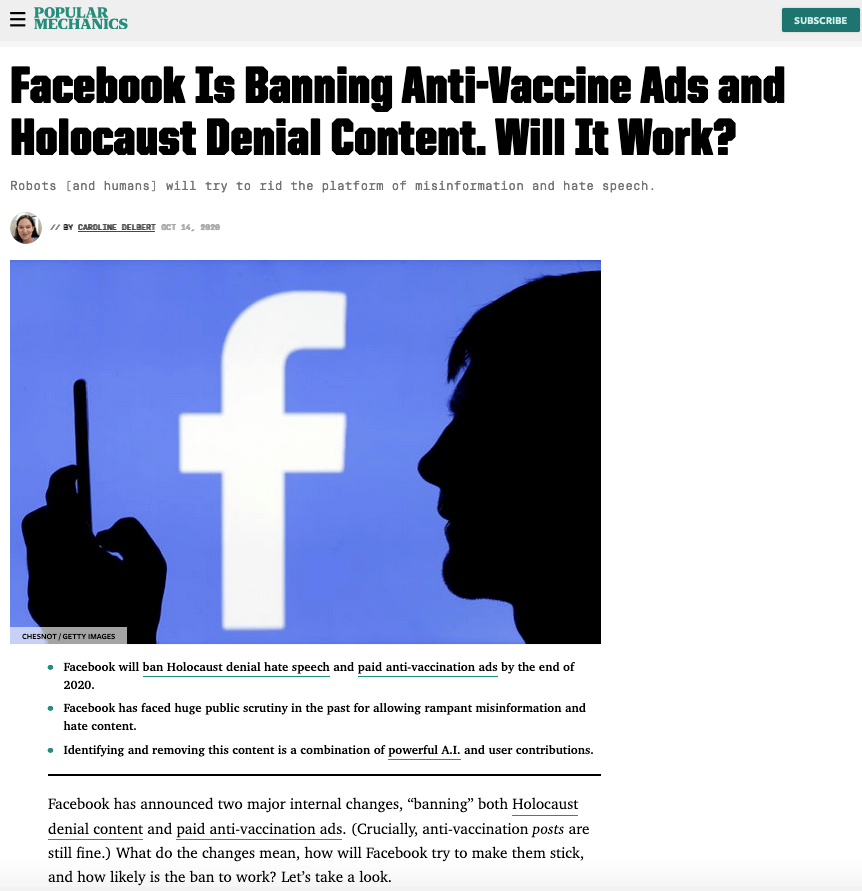 In the case of Facebook I think maybe it was a packaged deal. They officially ban "Holocaust denial" - something that no politician or media figure would come out and oppose for fear of being labeled "anti-Semitic" - but the actual goal was just to get rid of anti-vaccine content in anticipation for the Covid-19 vaccine.

If you go through Google news you will find that ADL, SPLC, and various individuals have been whining about "Holocaust denial" content on Facebook for over a decade.

I can't find stories demanding Twitter do something about revisionist content. That is because it was already banned, so what is the point of this announcement? From an article a few days old: http://archive.fo/uKJal

Twitter today followed Facebook’s lead in confirming that yes, it will remove any post on the site that denies or distorts the Holocaust. Specifically, it will remove “attempts to deny or diminish” any violent events on the platform.
Unlike Facebook, Twitter didn’t make a policy change specifically for Holocaust denial. Indeed, its hateful conduct policy doesn’t mention Holocaust denial, but a spokesperson told Bloomberg that the topic is implied in the policy.

So there was no change.
Twitter is already censoring all sorts of tweets, even from the US president, his son, and the most watched cable news anchor (Tucker Carlson).

And what is this silliness:

How does a tweet help a virus spread? It is airborne, it is cannot travel through a computer screen. And now they have "researchers and developers" sitting there "study[ing] real-time coronavirus conversations"?
Sounds like a deceptive way to say "Moderators constantly monitoring discussions so they can intervene if someone says something not approved"

If they weren't losing control of their ridiculous narratives they wouldn't have to do all of this "real-time" censorship crap. I couldn't imagine being a US citizen, employed in the United States, with my job being to censor 1st Amendment protected speech in the digital public square.
"There is a principle which is a bar against all information, which is proof against all arguments, and which cannot fail to keep a man in everlasting ignorance -- that principle is contempt prior to investigation."