Shining a new light on some Auschwitz Album photos and captions

Shining a new light on some Auschwitz Album photos and captions

The Auschwitz Album has been discussed here over the years and is well worth a look for those not too familiar with it. You can find it here - https://yadvashem.org/yv/en/exhibitions ... /index.asp

Essentially the album is a collection of pictures taken at Auschwitz showing the various stages of arrivals at the camp from trains emptying their passengers to jews having been shaved, showered and given work clothes to the darker themes claimed such as waiting to be gassed etc. The premise of the whole thing is that it PROVES the holocaust happened. In reality it proves nothing at all except that jews and non jews were deported to the east to a variety of camps for work and resettlement purposes during the war. None of which do us revisionists disagree with. Indeed in my yoof in South East London we were told of buildings and road infrastructure projects all around us that were tackled by German POWs. So what?

Those very observant among us will notice, no ill treatment, no tattoos, no beatings or gas chambers of any sort whatsoever. Indeed you might just see happy family groups, freshly scrubbed and newly equipped people who look well fed and in remarkable shape ready to find gainful employment and a sense of purpose and unity. I use the word 'Unity' so as to pretend I got the Joe Biden message which I definitely did not.

Anyway the purpose of this thread is to look at just a few of the photos with their gloom and doom laden captions, which infer gas chambers and imminent death and replace these captions with a more upbeat and likely true description. 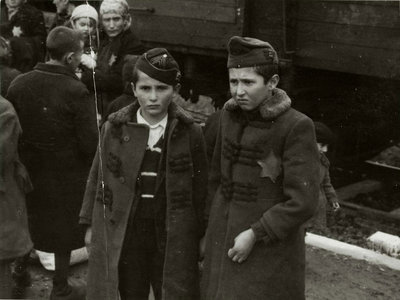 Two of Lili Jacob's siblings - Sril (Israel) and Zelig. They were gassed shortly after arrival.

Two well dressed young lads about to enjoy a really good adventure en route to a better life. Note the assumption and claim these two were gassed in non existent gas chambers and with no proof or evidence. 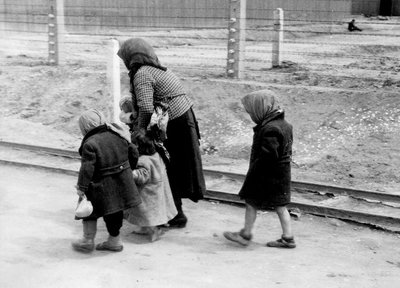 An old Jewish woman takes care of the little children as they are forced to walk towards the gas chambers.jpg

A grandmother and her grandchildren enjoying a leisurely walk in warm sunshine before being offered food, a hot shower, new clothing and a short journey on another train to a new life in the Russian countryside. 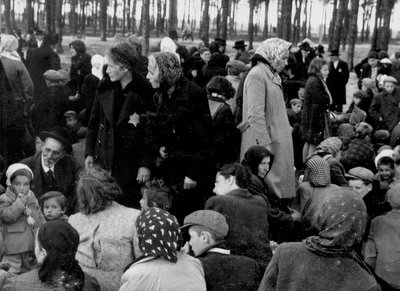 These were the last relatively peaceful moments together, before being driven into the gas chambers and murdered

A relaxing place under the shady trees for family groups to sit, eat and enjoy lively chat and even some banter. Children are eating and happy. Shortly after they were given passage to a new life in the east after a hot shower, the first many of these people had enjoyed in many months. 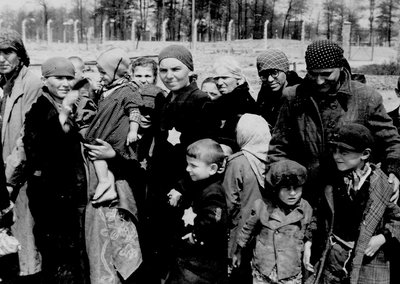 jewish women and children forced to walk towards the gas chambers.

I see a happy family group of women and joyful cheeky children and no one forcing them to do anything. Many of these people went on to enjoy fulfilling lives and careers in the West and in israel where free money was given to them forever. 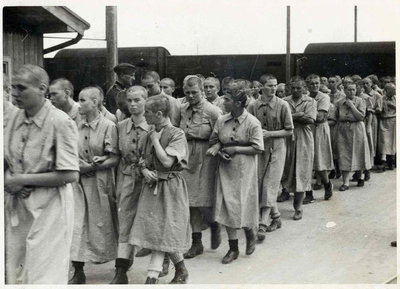 Jewish women prisoners walk inside the women's camp, wearing the standard prison uniform. On the left, a SS man watches them.

Clean and feeling fresher than they had done for months young and healthy women are issued with smart and practical uniforms to make their working days more enjoyable. Notice they have had their heads shaved so as to help stop the spread of lice. The Germans were sticklers for care of their workers and maintained top health care facilities in the camps.
'Of the four million Jews under Nazi control in WW2, six million died and alas only five million survived.'

Re: Shining a new light on some Auschwitz Album photos and captions

borjastick wrote:Those very observant among us will notice, no ill treatment, no tattoos

Tattoos are one form of "proof of the Holocaust" in the common man's eyes, but also a typical case of how things getting sticky and complicated very fast when you pull on any string within the Holocaust. All kinds of questions raised. The simple narrative falls apart.

The tattoo subject gets CODOH-Forum threads at a fairly regular rate, including:

Are there any arm tattoos visible on anyone in any of the Auschwitz Album photographs? Are there photos of untattooed forearms? We see forearms in the last picture you post but none show obvious tattoos.
The wind is blowing