For those who may not know, Andrew Mathis (PhD, English Literature) is a prominent anti-Revisionist activist. Also known as a "Holocaust Enforcer." A search for the word "Mathis" gets 760 hits here at CODOH-Forum. Here are some threads about him.

Two weeks ago, on Twitter, Mathis trolled a Holocaust skeptic. The latter has since been banned.

Mathis went back and forth with this person. The Twitter user apparently expressed disbelief in the gas chambers and other parts of the Holocaust story. Mathis finally said this to him:

I have a better idea. Since you’re the one claiming it’s false, prove it.

The next day, he got an automated email warning from the German government (indirectly), to the effect of:

Hey! You! Don't tread into dangerous territory like Holocaust Skepticism; We're watching you! 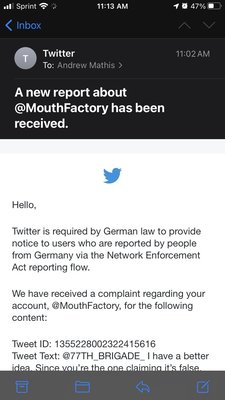 Twitter is required by German law to provide notice to users who are reported by people from Germany via the Network Enforcement Act reporting flow.

We have received a complaint regarding your account, @MouthFactory, for the following content: "I have a better idea. Since you’re the one claiming it’s false, prove it."

After receiving the warning, Mathis wrote:

Listen: If people there are gonna report me for breaking German law on Holocaust denial, maybe be a bit more thorough and look at what I’m actually saying.

Thanking you in advance.

I didn't know Twitter did this, handed out direct and personal legal warnings to Holocaust Skeptics telling them the German government is watching. I wonder how widespread it is?

I see this traces to a law passed in 2017 by the then-outgoing Bundestag, a new law and framework for dealing with social media, to be effective from January 2018:

The Network Enforcement Act, Netzwerk-Durchsetzungs-Gesetz ("NetzDG") (in longer form, "Gesetz zur Verbesserung der Rechtsdurchsetzung in sozialen Netzwerken," Law for the Enhancement of Law-Enforcement on Social Networks). This law clearly wanders into anti-free-speech territory, anti-dissident territory, and unconstitutional territory, but regimes never complain when they themselves are doing it. Legal intimidation and censorship, including coercion of platforms, in the name of suppressing "fake news" and "hate speech." Myanmar, for one, has very similar laws also specifically targeting social media.

Note that "NetzDG" is not only used against Holocaust-Deniers. It casts a wide net, at least the framework of it does, which is why the law is so unpopular (note, about half the length of its English wiki page is the "Criticism" section; the German wiki likewise has a very long 'Controversy' section). The law was opposed by the Linke Party and the Green Party and the AfD (an interesting coalition), and they continue to oppose it. It was passed under Merkel with CDU-SPD support.

It's of course absurd that "Holocaust Crusader" Dr. Mathis would get this NetzDG Warning for Holocaust Denial, seemingly because of misreading of his comment. But the experience raises the question of how often Germans get these warnings, how much of what Germans try to write online is now censored by the powers of this law, and (harder to quantify) how much of the demonstration-effect of the new law encourages people to self-censor? At the least, they are clearly intimidating people away some forms of discourse.
The wind is blowing

I guess what he did wrong was ask someone to disprove the "Holocaust" conspiracy theory, or some aspect of it.
You are not supposed to do this. We are supposed to:
(1) Complain that someone could possibly question the narrative. The more offended and emotionally distraught you are, the better
(2) Spam links from orthodox sources faster than anyone could read them
(3) Ask silly questions like "Where did they go?" when exterminationists the only ones claiming to know exactly where they went
(4) Report "Holocaust denial" posts so Twitter can remove them and ban the user
"There is a principle which is a bar against all information, which is proof against all arguments, and which cannot fail to keep a man in everlasting ignorance -- that principle is contempt prior to investigation."

I preferred that Johnny Mathis bloke when he was singing for a living.
'Of the four million Jews under Nazi control in WW2, six million died and alas only five million survived.'