Here is an Auschwitz riddle
See the sign posted at the touristy gas chamber building at Auschwitz main camp. Read the item "b". I took the liberty of copying it for you on the page also. Then look at a 1942 drawing of the building. Note the red dotted line and the green dotted line. These are the only pathways to the alleged gas chamber in the building. People walking the red dotted line path would see the cremation ovens and freak out? Going via the green dotted line they walk through a room with all the cremated remains of people before them. Really? Why not put the remains in the Urn Room?
Consider the following:
1) Why use this room to store the remains if people doomed to the gas chamber will have to walk through that room to get to the gas chamber?
2) From an evil Nazi standpoint, why not take them outside and leave them in back or where they cannot be seen. What is the point of storing them here? and not outside?
3) Putting the remains in this room creates another task that needs to be done to dispose of the remains.
Can anyone see any logic in this claim for "b" that I do not see? 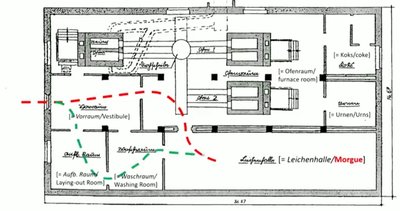 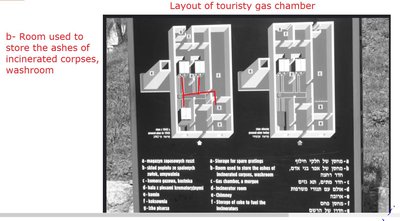 The museum authorities apparently made up the labels for most of the rooms on the tourist sign themselves or have taken the names of the rooms from some made up "eye-witness" story. I have actually compared the two pictures in your post myself and asked about this here (viewtopic.php?f=2&t=12575&p=92965#p92965) - and received no answer. I don’t know of any plan where the labels on the tourist sign are used. The urn room was used to temporarily store the ashes of deceased (non-Jewish) inmates until they were sent to the relatives. This room as well as the washing and laying-out room don’t fit with the attached "gas chamber" and point to an innocuous use of the crematorium as an actual crematorium with built-in morgue. The story twisters at the museum probably thought it would be better to hide this information from the casual visitor, but they also had to invent some story about the purpose for the rooms around the "gas chamber". They probably did the best they could, so why blame them if it’s illogical or absurd?
»[Holocaust soap] odor, if captured and retained… would preserve the core of an individual soul… The undesirable smell of the extract spoke of the spectral Derridian trace… that continued to remind its consumers of their own bio-ontology.«—B. Shallcross
Top
Post Reply
2 posts • Page 1 of 1