News from the Institute for Historical Review - October 7, 2004

British historian David Irving and IHR director Mark Weber addressed an appreciative audience at a special IHR meeting on Saturday evening, October 2, 2004. Some 70 people, including a few children and an infant, attended the event, held in a hotel meeting room in Costa Mesa, California.

Sales of books and tapes at the meeting were brisk, and several attendees made generous donations to the IHR.

In his introduction of Irving, Weber praised the best-selling historian for his skill, energy and courage. He recounted their first meeting more than 20 years ago at the National Archives in Washington, DC, and their relationship in the years since, which has included lectures by Irving at IHR conferences and meetings, and addresses by Weber at two of Irving's "Real History" conferences.

Just a few weeks ago, Weber noted, Irving was barred from visiting New Zealand to accept an invitation to address the National Press Club there. The pretext given by New Zealand authorities is that he had been barred from Canada. Canadian authorities had banned Irving on the grounds that he was barred from Germany. And German authorities banned him because in April 1990 he had told an audience in Munich that the "gas chamber" shown to tourists at the Auschwitz I main camp is a fraudulent postwar reconstruction. Under German law, it simply does not matter that Irving's statement was true, as even establishment historians now acknowledge.

In the first of his two lectures at the IHR meeting, Irving took a critical look at the recently released Nine-Eleven Commission Report. He expressed disdain for President Bush's claim that the perpetrators of the attacks against the World Trade Center and the Pentagon were motivated by hatred of America's "freedoms." Instead, Irving stressed, and as the Commission Report itself makes clear, the primary motive of the perpetrators was rage against American foreign policy, above all US support for Israel's brutal oppression of Palestinians.

Citing gaps and anomalies in the Report, Irving suggested that the third airliner hijacked on September 11, 2001, which came down in Pennsylvania, may have been shot from the sky on orders of Vice President Cheney to keep it from hitting the Capitol building in Washington, DC.

After a break, Irving returned to the podium to lecture about the devastating Allied air attack on Dresden in February 1945. His first book, The Destruction of Dresden, was issued in 1963, when he was in his mid-twenties. He spoke about the continuing debate over the number of victims, with death toll estimates ranging from about 30,000 to ten times that figure. In Irving's view, the most likely toll is about 135,000. The precise figure is difficult to establish, he explained, because at the time of the attack Dresden was packed with hundreds of thousands of refugees who were fleeing the advancing Red Army, and because the bodies of many of the victims were incinerated in the intense heat, or were buried under rubble, and therefore could not be counted.

Mark Weber in his address [Audio: Real or MP3] said that a crucial factor behind the US invasion of Iraq was concern for Israel's security. This is so widely understood by Washington insiders that US Senator Ernest Hollings was moved last May to declare that the US invaded Iraq to "secure Israel," and that "everybody" knows it. Referring to the cowardly reluctance of his Congressional colleagues to openly acknowledge this reality, Hollings said that "nobody is willing to stand up and say what is going on." With few exceptions, members of Congress uncritically support Israel and its policies due to what he called "the pressures that we get politically."

Jewish-Zionist plans to overthrow the Iraqi regime by force were already in place well before George W. Bush became president, Weber noted. A small but well-placed group of pro-war Zionist "neoconservatives" in the Bush administration played a decisive role in prodding the US to war.

Americans have already paid a high price for the US alliance with Israel. This includes tens of billions of dollars in economic and military aid to the Jewish state, the cost of the Iraq war and occupation, now more than $100 billion, and the deaths of more than a thousand Americans there. Directly and indirectly, America's "special relationship" with Israel has also generated unprecedented distrust, fear and loathing of the United States around the world.

Predicting that the cost will certainly increase in the years to come, Weber pointed to the growing danger of war with Iran. He cited Israel's threat to attack the country if it builds a nuclear reactor, and Iran's vow to retaliate forcefully against any such assault. The US could easily be drawn into such a conflict, which likely would be much more destructive than the Iraq war.

Even as President Bush keeps assuring everyone that things are getting better in Iraq, journalists on the scene and independent analysts warn that the US hold on the country is slipping, and that the anti-American insurgency there is growing.

A disaster is coming, said Weber, because Washington's deluded Iraq policy will inevitably clash with reality. But an even greater catastrophe is coming, he continued, because US foreign policy generally, and especially in the Middle East, has been one of "self-delusion, wishful thinking and arrogance." Inevitably, he said, it will collide with "reality, common sense and justice."

Delusion and arrogance in US foreign policy is nothing new, said Weber. He cited the American declaration of war against Germany in 1917, which President Wilson said was necessary to make the world "safe for democracy," and President Roosevelt's World War II pledge that the defeat of the Axis powers would usher in a new world order of permanent peace, supervised by the United Nations and based on a trusting alliance of the United States and the Soviet Union.

During the Cold War era (1947 to 1991) the two great world powers were the US and Soviet Union. The United States could avoid catastrophic consequences of a self-righteous, arrogant and deluded foreign policy, said Weber, because nearly the entire world feared Soviet domination more than it did American hegemony.

The US alliance with Israel, which is contrary to authentic American interests, is an expression of the powerful Jewish-Zionist role in American political and cultural life. American policy is so tightly in the grip of politicians who are beholden to Jewish-Zionist power, and so committed to Israel, that regardless of who wins the presidential election in November, there will be no fundamental change in US policy. Exposing and countering this power, concluded Weber, is a task of the greatest importance, for America and humanity. 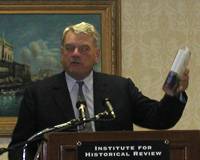 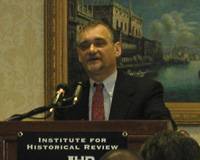 Mark Weber talks about the war
in Iraq, and America's special
relationship with Israel.

On October 1, Mark Weber was the guest on From The Grassy Knoll. Topics include an update on the plight of political prisoner Ernst Zundel, wartime propaganda, Iraq-Iran-Israel, and the presidential debates.

Stream Download
"Either we have free speech.....
OR WE DON'T"