France's dark secret on the Holocaust

France's dark secret on the Holocaust

Why did Hitler leave the French Jews alone ?

France was a very safe place in WW2

Just by crossing over smart Jew could live. Once the signs went up so did the rents and property prices.


Figures according to Jewish sources

The Fuhrer in Paris

One day after France signed an armistice with Germany in June 1940, Adolf Hitler celebrated the German victory over France with a tour of Paris. Here, Hitler's train arrives in Paris. Hitler's tour included the Paris opera, the Champs-Elysees, the Arc de Triomphe, and the Eiffel Tower. After visiting Napoleon's tomb and the Sacre Coeur, Hitler left Paris

Every socialite in Paris wanted Hitler at their parties.


Paris during the occupation

The German army was welcomed

Paris during the occupation

The claim that thousands of Parisians were members of the anti-Nazi "Resistance is an aspect of the Second World War that has come under increasing scrutiny in recent years. As British historian David Pryce-Jones explains in his study of Paris in the Third Reich, there was little actual resistance activity in the French capital. Indeed, during the German occupation life in Paris went on much as it had before the war.

A striking point is the contrast between the behavior of the victorious German occupiers of France in 1940 and that of the Allied troops who overran Germany in 1945. Unlike what happened in Germany and Central Europe in 1945, when the Germans took Paris there were no scenes of mass pillage, rape, and murder.

The French mass circulation weekly L'Illustration described the German soldiers as "handsome boys, decent, helpful, above all correct." Hitler even cancelled a huge victory parade that had been planned by the military, so as not to alienate the Parisians.

Within a few days after the onset of the German occupation, the schools, restaurants, theaters, trains, newspapers, and other public services were back in operation on a near-normal basis.

The Paris police, who outnumbered the Germans, remained on duty throughout the occupation

Nor did the Germans round up large numbers of political opponents and suspects.

Jean-Paul Sartre, Coco Chanel, Dior, Yves Montand, Maurice Chevalier, Picasso, and Albert Camus were among those who lived and worked -- very productively -- in Paris during the German occupation. One French writer, Louis-Ferdinand Celine, expressed surprise that the Germans were "not shooting, hanging, exterminating the Jews ... stupified that anyone with a bayonet would not be using it all the time.


The French jew were never touched.

The next logical step is what is the truth on the Jewish French Underground ? Does anyone believe a Parisian Jew is going to run around blowing up Nazis in french restaraunts ?

The Jews existed hand in hand with Germans on a daily basis.


French nightclub owner - who were Jewish - catered to the Germans

The follies were advertised in German

The pyschology of Holocaust memorials


Drancy – 75,000 Jews were shipped to Auschwitz from here

Same area as a tourist attraction

The making of a ‘Holocaust theme park’

Take a cute city outside of Paris – build some statues and park a railway car anw ‘Wa Laa’ your can start building your dream.

Drancy according to the Jewish legends

Drancy is now s suburb of Paris. During the Nazi occupation, it served as a transit camp for French Jews arrested by the French Police and German occupation forces. This was the principal departure point for Auschwitz. 77,000 French Jews were deported, including 11,204 children.

Drancy is now is a suburb of mixed refugee and immigrant populations, surrounded by apartment housing and stores. The Vel d'hiver, a velodrome for bicycling races in Paris was the other principal point for roundups of French Jews. That structure has ben destroyed.

There wasn't a RR track within 5 miles

According to jewish legend they were all gassed at Auchwitz !!

An excellent synopsis
I look forward to more.
Top

No big deal, but I believe this is the Brandenburg Gate in Berlin during or near the time of the 1936 Olympics, not Paris 1940. Interesting posts though, thanks.


He drove around in an open car with no escort 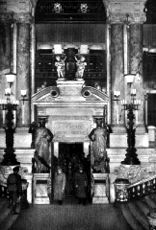 Hitler at the opera

The Opera was Hitler’s favorite example of Parisian architecture, and he carefully inspected the great stairway, resplendent in its ornamentation and sweep, the splendid foyer, and the elegant, golden parterre.


Hitler had made a careful study of the building and confidently led his retinue through the deserted grand spaces, guided by a small, white haired attendant. All of the lights burned brightly, as they would on the night of a performance. Near the proscenium box, Hitler found a salon missing and commented. Yes, the room had been eliminated during renovations many years ago, said the attendant. “There, you see how well I know my way about,” said Hitler, who was fascinated by what he saw. He expostulated ecstatically about the beauty of the place, his eyes glittering with excitement.

The attendant had quickly recognized whom he was guiding through the building, and was thrilled. When the visit was over, Hitler whispered to his adjutant, Wilhelm Brückner, who took a fifty-mark note from his wallet and gave it to the attendant. When the little white haired man politely refused the money, but wished to shake Hitler’s hand.


Movie of Hitler in Paris

An excellent synopsis, I look forward to more.


Me too -- perhaps one day if we are lucky Mr. Skunk will synopsize the frightful WWII tale of Barry the dog -- Barry used to terrorize the poor Jews to no end -- Barry and his handler Lulke were eventually caught and put on trial after the war, the testimony against them so shocking it caused me to immediately send in a big check to my local Holocaust Memorial -- but The_Skunk tells it best

Not to rock the boat, but if that photo of Hitler entering Paris was incorrectly identified it should be addressed. If revisionists demand accuracy they should lead by example. To do otherwise only gives room for holocaust promoters to assert doubt.


Just to remain objective, I wonder what would have happened to any Parisians displaying open dislike for the occupation?
Top
Post Reply
10 posts • Page 1 of 1