It doesn't seem possible to prove that jewish women were treated worse than men. The implication feels like one of rape but we all know that this was strictly forbidden under the German race laws. If Oscar Schindler supposedly spent time in jail for kissing a jewish girl then it doesn't stand to reason that a German soldier would risk jail to rape a jewish girl.

You are right there. Also in 1934(?) the Nuremberg Laws, which included the citizenship law, and were for the protection of German blood and honour, not only defined Jews but also, amongst other things, prohibited sexual intercourse between Jews and German Citizens, so an ordinary soldier of the type on trial at that time, would also be be excluded. The tape doesn't seem to mention Jews at all. Also, rape isn't mentioned and secondly if it was rape, then surely t that could have carried out by collaborators including Jews. However, that is speculation. Females are unfortunate in that they can be susceptible to things that a man cannot. For example, in the seventies I witnessed the results of terrorists torturing two young girls by ramming black powder up their vaginas and then firing it. This was to intimidate their father who was forced to watch and was guilty of being on our side. Mercifully, the girls were bayonetted to death after ignition.

Apparently there were many cases of consensual relationships between the SS and Jewish inmates. I would imagine rape might have occured, it occurs in so many war situations. Many female American soldiers have been raped by male fellow soldiers in Iraq, and Seymour Hersh and other reporters have spoken of American soldiers raping Iraqi's, male and female.

Jesus, FM, what country did you witness this torture happen in?

There is nothing "sensational" here. It is a well-known fact that one of the charges was murdering 300,000 registered inmates, those who had resided in the camp itself.

If some journalist got it wrong, so what?
Top

Thanks for posting that, but please put a link. Without a link we're on the trust system. Ie. you said David Irving put this up and I believe you. I.e because you've posted 12 times, what you're saying must be true. --thanks.
Top

RE the 1948 German newsreel containing information that a Polish war-crimes court found that "altogether nearly 300,000 died at Auschwitz".

The 300,000 figure most probably refers to the number of registered prisoners who died. [Gerald] Reitlinger quoted a similar figure in his 1953 book The Final Solution; as I recall, he wrote that something like 400,000 persons were registered as prisoners at Auschwitz-Birkenau, and of these some 300,000 were recorded as having died.

What a disgrace for the Revisionism this Irving is!
Top

What an honor to revisionism David Irving is.

If you read the Maly Jacek link, it's clear that they're talking about all victims

The Auschwitz concentration camp remains as it stands today, as a monument of shame to the lasting memory of its three hundred thousand victims."

Once again the believers, including Michael Mills, resort to trying to mislead, since they can't take on the revisionists in an honest way.
Top

If you read my posting, you saw this:

If some journalist got it wrong, so what?

Only an ignorant person can believe that Communist Poles used the number lower than Hoess' 2,500,000. Alas, Irving is not ignorant. Looks more like a Zionist agent. 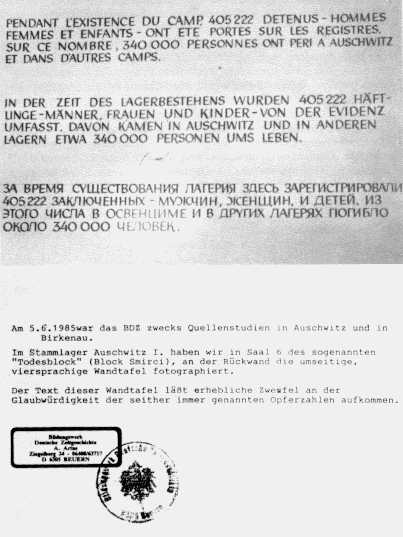 Harvest of Sorrow: You're right. I didn't read your post and then took your last post out of context. Sorry.

Are you saying this: that it's not a situation that there was this really low death number in the first years after the war, and that number got inflated later. And actually the film is just talking about the inmates who died, and the narrator or writer got it wrong a little bit in saying that was the total cout, and thus it's a little disingenous for Irving to put that on his site with that implication.
Top

In essence, yes, although it's a well-known fact.

Of course Communists used inflated numbers from the beginning. You don't think they said to Hoess: "You lied, you killed less people", don't you? They didn't say to the Soviet Commission: "Your calculations are off by a factor of 10". It's all so obvious.

Besides, Prof. Faurisson has corrected this mistake long ago:

Irving is not a stupid person, he should have known about these things. Moreover, Michaell Mills even pointed out the obvious explanation to him. And Irving knows about the plaque - he cites it on that page.

These kinds of actions can only discredit Revisionism.

Still wonder why he has lost his case against Lipstadt?
Top

Harvest Of Sorrow: I'm impressed. I see what your saying and what you're saying about Irving, and Irving does go down a notch in my book. Plus you provided an impressive link to that Faurisson article. Nice job.