Finally, it also had a gas detector at the bottom left.

Any room whether large or small could theoretically serve as a potential homicidal gas chamber. Or a fumigation room.
The peephole serves to see whether someone my be trapped inside. In my dad’s restauarant was a walk-in refridgerator. The door also had a peephole to see whether someone would be inside.
Gas detectors for HCN were at that time not yet invented. They used a chemical test kit to check for HCN gas residues in fumigation rooms.

On the photograph which shows B&D 1 and 2 at Majdanek, both rooms are covered from floor to ceiling with stains. How does one apply Cole's reasoning in regards to that camp?

Michael Tregenza also noted that the HCG at Majdanek was adapted to produce CO gas, which apparently is useless for disinfection purposes but is lethal to warm-blooded animals. What is everyone's take on this?


CO is indeed useless for disinfestation and highly poisonous for humans.
What evidence exists which could indicate that CO was used to gass people?
Top

Here's yet another WWII German gas tight door for an air-raid shelter at Nuremberg, note the peep hole.

This picture is of the alleged gas chamber in Majdanek

Look at the door at the far end. It is provided with door handles on the inside of the gas chamber. What would prevent the victims inside to open the door and get the hell out of there?
Top

It seems no one is interested in acknowledging that you need go no further since Dr Green has established that staining did not occur in homicidal chambers.

Rumplestiltskin says the stained walls of the Majdanek chamber prove they were used for gassing. Dr Green disagrees - Rumpleslitskin's argument is with him.

I'm puzzled by a "Revisionist" site that ignores the best proof when shown...
Top

Relax, you're right Radar, we're just thorough; and it's alway good to cover all the bases.

Perhaps you should alway let our readers know about this 'Dr. Green'. Who is he? What organization does he represent? etc. We can't expect everyone to automatically know.

Your account of Majdanek appears to conflict with Raul Hilberg's. Note your description of the rooms and then compare with Hilberg. Bold text is my emphasis:

There were two rooms in Majdanek and they were Bad und Desinfektion 1 and 2. One was used as a delousing chamber and was much smaller and the other was much larger and was believed to be a homicidal gas chamber for a number of reasons.

In German correspondence the camp as referred to as Lublin, whereas its common name after the war was Majdanek......In September-October 1942, three small gas chambers, placed into a U-shaped building, were opened. Two of them were constructed for the interchangeable use of bottled carbon monoxide or hydrogen cyanide gas, the third for cyanide only.
volume III page 879


How do you explain this?
Top

Carto's Cutlass Supreme gives us another great example of how liars are always busted on their lies, they can't keep them straight. Not that Rumpelstiltskin is a lair, he's just been led down the primrose lane.

Rumpelstiltskin, are you there? Do you have anything to support the your original position? Wanna try another camp? Throwing in the towel?

I hope Rumpelstiltskin hasn't been chased away. I find observing debates such as this to be a great way of learning, as both sides dig up everything they can in order to 'win'. Plus it is healthy to see the revisionist arguments put to the test.

This photo is captioned with the allegation that the furnace, if that is what it is, was used to create CO to gas people in the crude structure it is conected to. 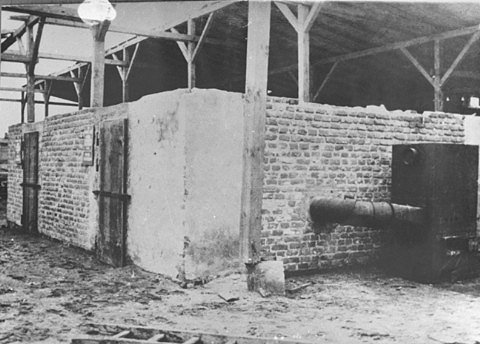 http://www.historyplace.com/worldwar2/h ... d-lib2.jpg
I'm not sure what it is but I'm confident that revisionists have it covered.

The Majdanek stories are hard to keep track of and it seems to be the most complicated of extermination centers, with three different murder weapons (HCN, CO from a bottle and from a furnace) and several different rooms. Does anyone have a plan of this area of the camp? It would be interesting to see the layout, where the alleged homicidal chambers are in relation to the other delousing rooms, etc.
Top

Yes, the Majdanek lie has gone through various changes. The constant changing of the claims certainly exposes the fraud on that point alone.

Here's the beginning post from:
http://forum.codoh.com/viewtopic.php?t=1793
see comments there.

Germans played jazz music to cover up the gun shots.

Arms and legs were cut off cadavers so they could fit 4 at a time into ovens.

Ovens could cremate those to carcasses in 15 minutes.

Claims that excavations of remains of hundreds of thousands discovered by liberating Russians.

Most of it narrated through a full array of clone like testimonies all attesting to witnessing a single event at a particular date.

Reports on finding empty cans of Zyklon B and cannisters of carbon monoxide.

There along the way with the rest of the nonsense we get one sentence that totally exposes the whole thing for what it is. And this is it -

"After the exposure of the atrocities perpetuated by the Germans at the Katyn Woods the Hitlerites set to work with increased energy to disinter the corpses from pits and trenches and burn them."


Ah yes, Majdanek, a microcosm of the laughable, absurd nature of the 'holocaust' story.

Drop quicker than flies on a level playing field. This thread gives a general idea of the scenario that would be acted out if the Zion’s allowed free speech in their journaille cartel. The Industry would probably last about two days as well!

So what’s your problem with black stains?
Top

If you look at the color picture of the alleged gas chamber in this thread, you can see black staining, but more importantly there is blue staining clearly visible.

If you go to so-called expert Dr Green's testimony at the Irving Trial he goes to lengths to show that it wasn't possible for human gassings to produce any blue staining. Yet there is blue staining being claimed as evidence of human gassing here at Majdanek.

This is usually where the threads end. Why discuss your own flagrant contradictions when you can just railroad people as white supremacists?
Top

Richard Perle wrote:This photo is captioned with the allegation that the furnace, if that is what it is, was used to create CO to gas people in the crude structure it is conected to.

I'm not sure what it is but I'm confident that revisionists have it covered.

It is a laundry facility for drying clothes to the specifications necessary to kill most lice eggs. It looks like a furnace and it's not a CO generator.

This is also not the same as the rooms for fumigation with the blue stains, as seen from the outside, below: 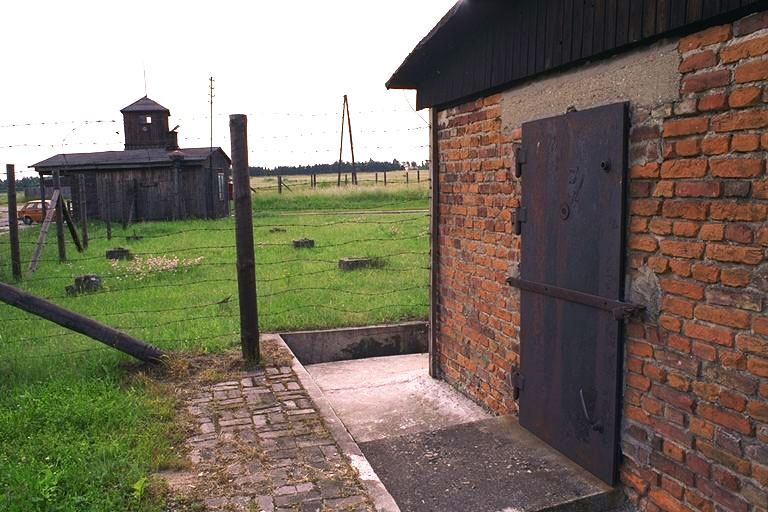 And we shouldn't confuse the fumigation gaschambers that were adjacent to the bathing and laundry facilities with the communal shower, which has a large window and even a washing basin, below: 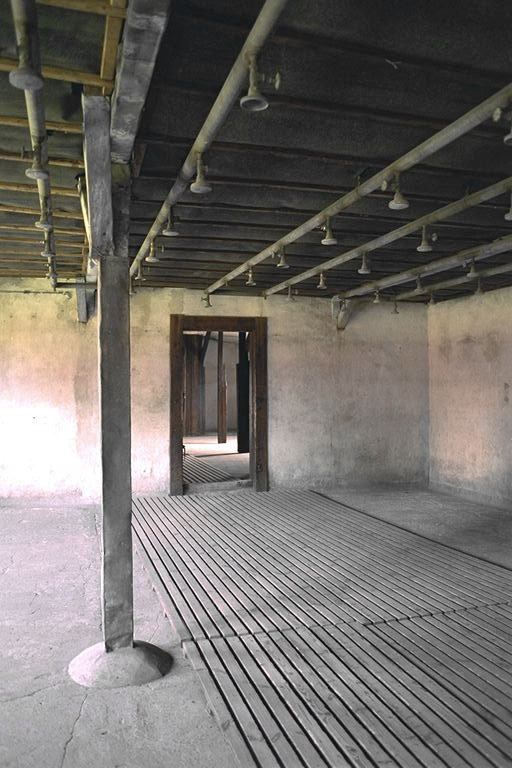 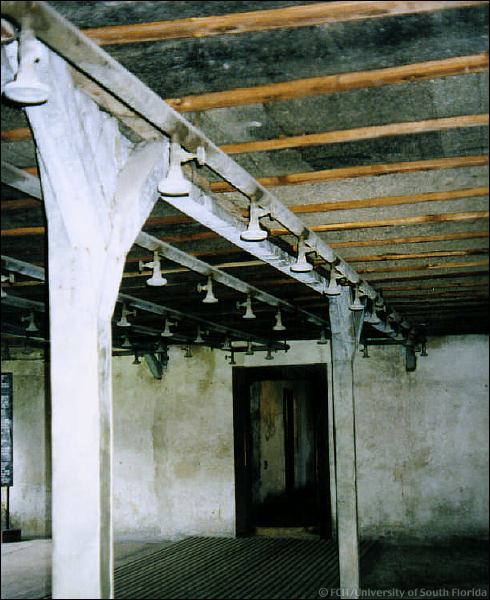 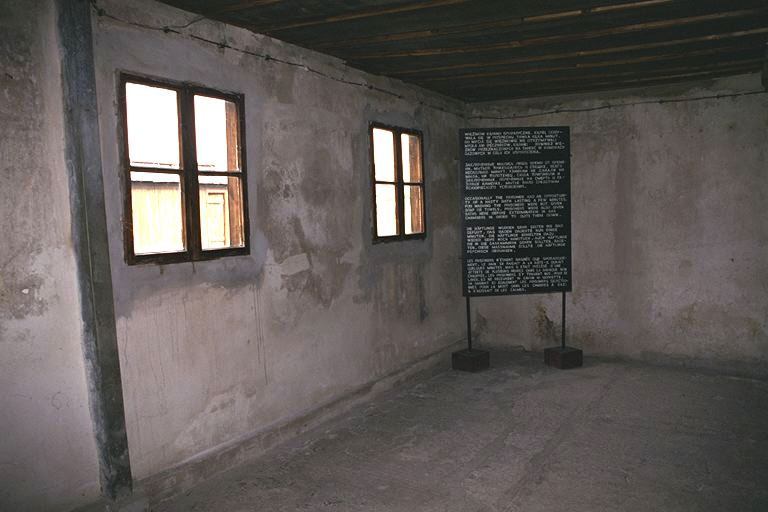 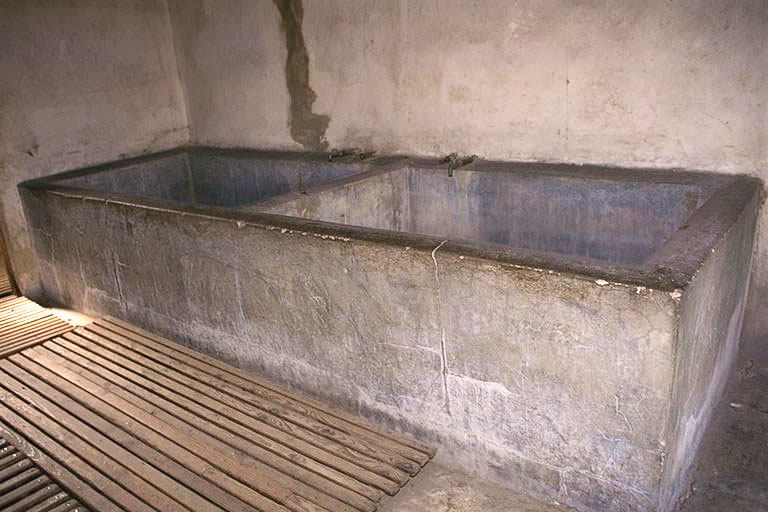 Richard Perle wrote:Does anyone have a plan of this area of the camp? It would be interesting to see the layout, where the alleged homicidal chambers are in relation to the other delousing rooms, etc.


The delousing, laundry and bathing facilities were on one side of the camp and are relatively intact today.

The crematoria, morgue, and dissection room are on the other side of the camp. This wouldn't have made for very practical exterminations, as corpses would have to be carted across the camp from the gaschambers to the ovens.

The Hoaxsters think that any room with a peephole makes it a homicidal gaschamber. Who wouldn't want to want a bunch of executions, after all?

The crematoria was blown up by the retreating Germans, indicating the higher value they placed on those facilities, and was rebuilt for the museum, I think, but the morgue and dissection rooms are realtively intact. 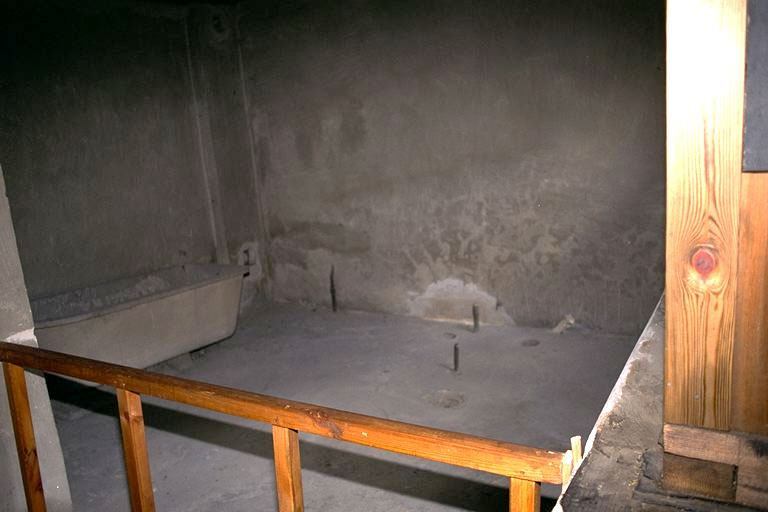 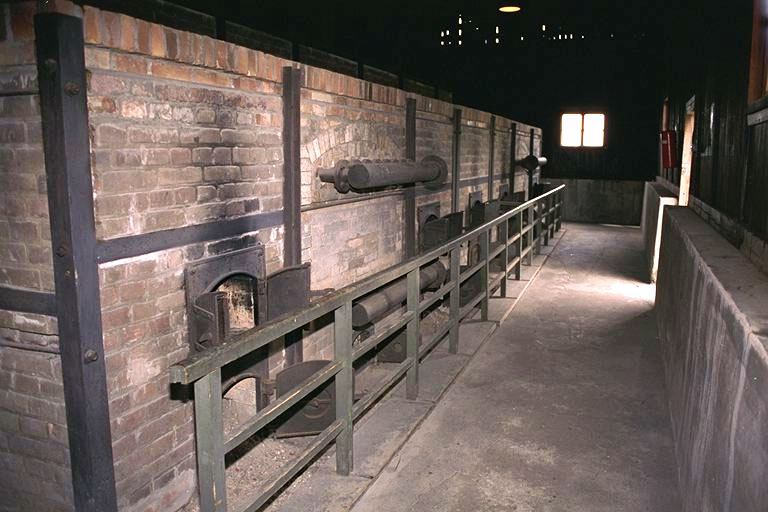 Dissection table in room adjacent to morgue and ovens: 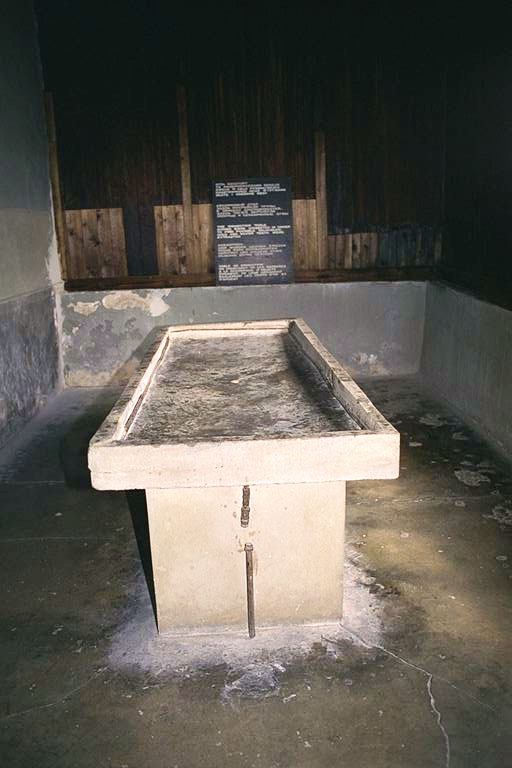 Below is the equipment room showing the observation window of the third "gaschamber" located adjacent to the morgue and crematoria and supposedly gassing with CO instead of HCN, although David Cole noted some blue staining around the large observation window, if I understand correctly. It looks like you can see some light blue staining in this room too.

More than likely the room on the other side of the window was used to store cadavers and was occasionally fumigated with HCN. If was also probably filled with Cartox (CO2 and T-gas) used to delay decomposition without refrigeration. T-gas is ethylene oxide and is still used as a disinfectant in hospitals today, either applied from cylinders in sterilization chambers or dissolved in alcohol and used to spray surfaces directly or with a CO2 propellant.

The Germans probably employed these disinfection methods in the "euthanasia" hospitals as well, as they are used in hospitals in any case. The observation window may have also been used to observe chemical gas detector strips or some kind of CO2 gas gauge. Graf and Mattogno report a pipe that extends into the room to spray something a meter or so above the floor. 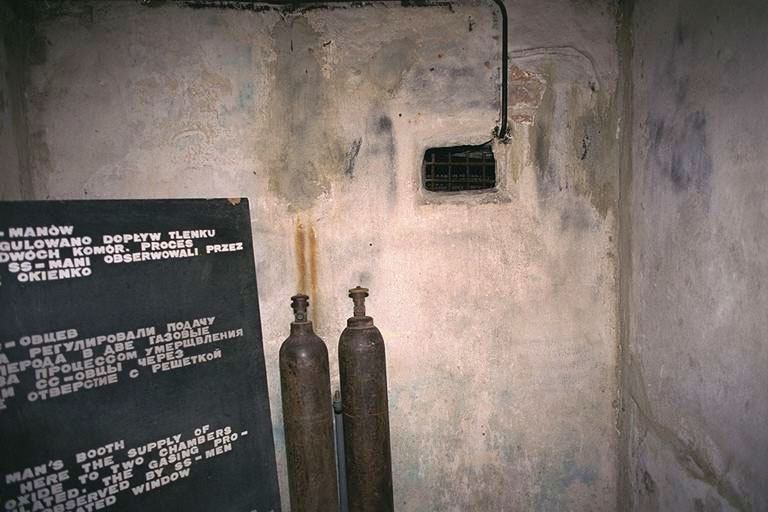 To date not a single person has produced evidence that proves these huge chemical slaughterhouses ever existed.

What has been done, though, is to stifle debate on this contentious historical matter by developing laws that criminalise those individuals who courageously ask:

“Show me the murder weapon!”
Top

I hope Rumpelstiltskin hasn't been chased away. I find observing debates such as this to be a great way of learning, as both sides dig up everything they can in order to 'win'. Plus it is healthy to see the revisionist arguments put to the test.


Well, if being shown the absolute fraudulence and absurdity of the gas chamber claims is 'chased away', then it would appear Rumpelstiltskin has fled. Anyone else ready to take the challenge?

The 'holocau$t' Industry has met their enemy, it is their own absurd lies.

“Show me the murder weapon!”

I shouldn't base any conclusions you draw on the choreographed collage of photo's Scott has posted, as most of the rooms/buildings show signs of post-war tampering by bodge artists.
Top
Post Reply
45 posts