US President Bush has said that free speech about the 'Holocaust' is intolerable. These photos dramatically demonstrate the basis for his outrageous pronouncements.

AIPAC: caught spying for Israel, makes huge yearly payments to both Republicans & Democrats in Congress, and those that are campaigning. Obviously, an Israel first agenda is required by all. 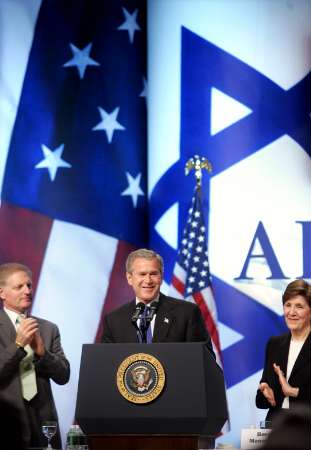 "The coward threatens when he is safe".
- Johann Wolfgang von Goethe
Top

There can be little doubt that the people who have led the US into a war for Israel's interest were the same people who contrived and then mandated that we all accept the 'Holocaust' dogma.
examples from:
http://www.antiwar.com/justin/?articleid=8491

... we are dealing with here is not simply a domestic group that had somehow seized control of U.S. foreign policy in order to pursue their interventionist agenda, but a foreign-directed and assisted covert operation designed to subvert the institutional foundations of various key government agencies and hijack U.S. military might in order to serve the interests of a foreign power, i.e., Israel.

There are two different approaches to the question of assigning responsibility for this disastrous war, both of which are valid. The first is to take the broad view and look for the culprits in the world of ideas. From this broad view, we can discern that any number of factors played a role in marching us off to war: the need for oil, the ideological preconceptions of the Bushies, the military-industrial complex, and, perhaps, Earth's alignment with Pluto and Mars. Such arguments can never be decisively settled, and are fodder for endless scholarly dissertations ostensibly "proving" this theory or that.

What can be proved, however, is that specific individuals, working in concert, proceeded to engage in illegal activities, including espionage, obstruction of justice, and forgery, to name just a few, in the interests of involving us in a needless and increasingly costly war. The crimes of the War Party can be traced back to specific persons: in identifying them and detailing their actions and motives, we can begin to understand the reasons for the biggest strategic disaster in our history.

"A Camarilla is a group of courtiers or favorites that surround a king or ruler. Usually they do not hold any office or have any official authority and influence their ruler behind the scenes. Thus they also escape having to bear responsibility for the effects of their advice."

"The coward threatens when he is safe".
- Johann Wolfgang von Goethe
Top

I know that this will be controversial as there are many Americans participating on this forum. That Bush loves everything Jewish cannot have escaped anyone.

But, is this unique among politicians in American society? Of course not, ALL American politicians love everything Jewish, including Israel.

So the Bush exemple is not an exception, it is the rule. The only American President, who would be the exception is JFK.
Top
Post Reply
3 posts • Page 1 of 1