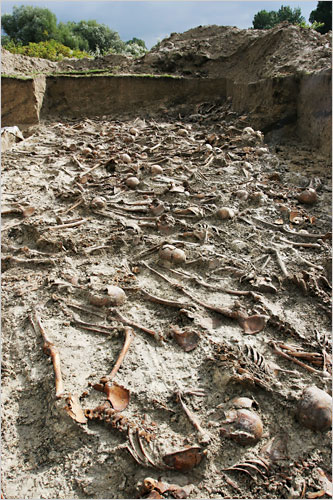 I remember that we discussed about this foto and the circunstances about half a year or more ago.

Yawn. How do they know they were Jews? The NKVD and Red Army executed multitudes of people.
see:
'holocaust mass grave claimed in Ukraine / to be fenced off'
http://forum.codoh.com/viewtopic.php?t=4302

It's important to make the point that the "Holocaust" is not supposed to be an ordinary set of mass executions of the kind that was unfortunately practiced by both sides during the Second World War.

The "Holocaust" (TM) -- the alleged one and only inimitable greatest crime in history -- is supposed do be the attempted extermination of the Jews, resulting in 6 million dead, most of them industrially chain-murdered in the gas chambers of the "extermination camps," not a few mass graves with bones in it in the midst of war zones.

How odd that no vestiges of this gigantic "Holocaust" of the Jews by the Germans can be found, when such apparently obscure killings as the alleged ones near Gvozdavka, in the Odessa region occupied by Rumanian forces, seem to leave detectable evidence. Of course, it would be interesting to know the composition of the pits. What evidence is there that the executed people were non-combatant civilian Jews mass-murdered in an "extermination operation"? Are there, for exemple any children among the victims?

It should be stressed that revisionists don't deny "mass executions" tout-court. For instance, one of the (legal) attributions of the Eisatzgruppen was precisely to execute people. The execution of unlawful combatants is a common practice in any war, and all the more so when a large scale partisan war is being fought, following closely the upheavals of one of the most savage revolutionary civil wars ever visited on any population.

It's also interesting to note that the possible exactions committed at this particular place must have been committed by Rumanians, not Germans. See, for instance:

"In November 1941, Rumanian troops allied with the Nazis set up a concentration camp in Gvozdavka-1, where about 5,000 Jews perished, according to regional Jewish leaders. Jews were brought here from several regions of Ukraine, as well as from what is now Moldova, they said."

No prejudice on my part, but one is reminded of what Léon Degrelle wrote about the undisciplined Rumanians: "The Rumanian soldiers had unquestionably performed many exploits since 1941. They had liberated Bessarabia and conquered Odessa. They had fought gloriously in the Crimea and the Donets. But they had a savage nature and massacred their prisonners, thus bringing about reprisals in which everyone suffered. Their massacres were not only savage, they were stupid. [...] Unfortunately, the Rumanians, in spite of our pleading, continued to massacre all the Russians who presented themselves at their posts." (Degrelle, Campaign in Russia, IHR 1985, pages 74-75)

How do we know the remains in that pit did not result from a massacre such as the ones Degrelle described, instead of the "Holocaust" of the Jews?

Alas, no similar testimony of Degrelle, who always seems quite ready to speak of the exactions committed by both sides, about any frontline systematic massacres of Jews. Quite the contrary: as a Roman Catholic he even wrote to the pope, in the post-war years, on the absurdities of the alleged "Holocaust" allegations.
Last edited by ASMarques on Fri Jul 18, 2008 2:25 pm, edited 2 times in total.
Top

- How does anyone know the date of this grave?
- How many corpses are shown? Thousands as alleged? Try actually counting.
- Are there bullets, shell casings, etc.?
- How do we know that these aren't combat deaths, or executions of illegal partisan/terrorists? Just because some looney rabbi says so?
- Will an impartial scientific investigation occur to determine just who the persons interred in the mass grave were?
- According to the standard storyline, Jews were first buried, then disinterred and cremated on open pyres so that the remains cannot be found. Now what's their story? The laughable lies collapse upon themselves.

Incidentally, around 30% of the Kiev population died 8 years earlier at the hands of the Soviets.

This single photo recalls the Soviet work at Katyn*, which was blamed on the Germans and accepted at Nuremberg as a German crime, which it was not. See:
http://www.codoh.com/documents/Katyn_V.pdf

Katyn forest was the scene of the murder of thousands of Polish officers by the Soviet Union. It was falsely accepted into the Nuremberg records that it was the Germans who were responsible for this slaughter. There were 'documents', 'eyewitnesses, 'confessions', executions of Germans; all of which allegedly attested to German guilt.

A detailed, thorough, and verifiable forensic examination (1) of the site was done by the Germans during the war and clearly established Soviet guilt; but no, the Germans were said to be the guilty ones.

It should be noted that this detailed, verifiable forensic study by the Germans was the only such study done by the belligerents of WWII. The Allies never conducted any such study of Auschwitz, or the other alleged mass murder sites, or alleged mass graves.

(1)
- corpses were shown 'in situ', corpses were exhumed, tagged, identified, the method of execution was clearly shown
- the study was thoroughly photographed and documented; observers from Axis, Allied, and neutral countries were in attendance

If it really is what they claim it to be, and had proof of it, we would be eating that for breakfast, lunch and dinner everyday, and that's not so.

They may be, if from Odessa, some of the jews that the cossacks butchered in november 1905. The guy claiming that photo being a 'holocaust' scene is the one who should provide you with some forensics, data about the remains, year of execution, etc. That is the right way to handle it in my opinion.
http://holowiz.rodoh.com
Veritas Filia Temporis
Top

holowiz wrote:If it really is what they claim it to be, and had proof of it, we would be eating that for breakfast, lunch and dinner everyday, and that's not so.

Quite so. The absence of any reference to the means of death (uniform for all? single shot to the back of the neck? by shooting squad?) or to any forensics on bullets or shell casings, is a strong indication that the evidence is not supportive of the allegations.
Top

The article quoted by Lupa states that en la posguerra sólo se consiguió identificar a 93 de estos miles de prisioneros judíos, i.e. "in the post war period only 93 of these thousands of Jewish prisoners could be identified."

Searching the USHMM's on-line archives for the location name "Gvozdavka," one is pointed to a Yad Vashem document titled "List of perished from Gvozdanka Vtoraya in 1941-1944":

Some relevant parts of the description (my emphasis):

Clicking the item number, waiting a little for the search page to shape, and doing a new search by "Gvozdavka," will lead you to the document, first page only (in Russian), with 23 names in it (at least some do sound Jewish).

So what we get is obviously a reference to the known 93 of the "thousands of Jews," and at least some of the first 23 names do sound Jewish, but we also get a clear mention that even the relatively small number of allegedly known victims were not exclusively Jewish.

So, here we have a mass grave conceivably -- but not demonstrably -- connected to alleged mixed massacres of Jews and non-Jews, probably by Rumanians and not Germans, if at all.

How's that for a "Holocaust" (TM) piece, even if a forensic connection were made? And why hide any forensic proof, instead of publicizing it?[/i]
Top

Coming from a Commission dedicated to finding "evidence" to support the propaganda accusations against the Germans, and known to have falsified evidence to suit its purposes, one must question everything unless objective proof is shown. No such proof can be found, on the number of bodies, nor of the religious identification, nor even of the perpertrator.

Ignoring those problems, we see only 93 bodies. From the tales often told regarding the Einsatzgruppen, one would think they wouldn't even waste their time with such a low number if there did exist a policy of extermination. This 93 count is but a tiny decimal to the thousands and thousands said to have been liquidated during each action.
Top
Post Reply
8 posts • Page 1 of 1