I am a web designer and programmer with graphics design practice.

I could find and modify a template if you'd use it.
"There is a principle which is a bar against all information, which is proof against all arguments, and which cannot fail to keep a man in everlasting ignorance -- that principle is contempt prior to investigation."

I'm not. That's why I said the page was confusing. Their confusion, not mine. A connection could be made to science and the techniques, but that's too far-fetched for our purpose.

This is sad but I think this forum may have to give up the idea of emblematic naked women.

I guess a candle in the dark, an ancient oil lamp or a lighthouse might do; you know, in the Amnesty International style. It's really difficult to come up with an effectively recognizable strong symbol for the simple Truth. It's either a naked girl, a mirror or a source of light in the dark, and that's that.

How odd. I'm looking for this; maybe something will come up.

There's the template if someone wants to test it out.
"There is a principle which is a bar against all information, which is proof against all arguments, and which cannot fail to keep a man in everlasting ignorance -- that principle is contempt prior to investigation."

There's the template if someone wants to test it out.

Can anyone open this "rar" compression?
Top

A screenshot of me just tampering with the template a bit.

Here's the download (test.html is the file I screenied, but is not used at all):

http://www.mediafire.com/download.php?jlky3bi2gzo
"There is a principle which is a bar against all information, which is proof against all arguments, and which cannot fail to keep a man in everlasting ignorance -- that principle is contempt prior to investigation."

Here is my impression as a simple participant on this forum, not connected with its administration:

1) Lamprecht's suggestion certainly looks better than the bald guy and the finger-pointing guy arguing (apparently over Dresden, or perhaps the merits of capillary tonics), but I would still prefer Halo's "Justitia" version, the one that incorporates both the "disengaged from ..." and the "dissecting a devastating religion" (much better than "myth", since non-enforceable myths are not necessarily bad or ugly) mentions within the rectangle. I'm not a J.-P. Sartre fan, but the quote also sounds right and may even deliver an ironic touch since it comes from a well-known judeophile and sticker for the "Holocaust". Also I don't think there is too much text in the template.

2) As I said, I don't like very much the handcuffs that already existed and Lamprecht integrated in his design. The idea is not bad but the rendering of the broken chain is not very immediate etc.

3) In the opening page, in my opinion, the Dresden reference should urgently go. Perhaps an image of ruins and desolation might be a good idea, since one of the probable results of a revisionist victory would be an increased sensitivity to the destructiveness and utterly unredeeming character of modern war. If so, any ruins would do, provided they were not immediately identifiable in order not to induce in error about the main focus of the forum. Something out of Stalingrad, Hamburg, Warsaw or Hiroshima would do as well, as would a creative mix of all of those.

4) Twin references to Zündel and Rudolf, preferably containing also a reminder of the other jailed revisionists should, of course, continue to be very much welcomed.

So, personally I would still vote for this one, even with no nude Veritas in it:

After all, the scales are a good emblem of fairness and the investigative spirit of historic revisionism, even if one finds little use for the sword of retribution (perhaps the scales might be brought a little more within view in order to give them additional emphasis).
Last edited by ASMarques on Sat Mar 21, 2009 12:56 am, edited 1 time in total.
Top

Lamprecht, that quote is very probably false, though a very superficially similar one seems to be true. It looks like the probably authentic quote (same place, but from 1948, not 1984) goes:

"SINISTER AIMS OF COMMUNISM SIR H. SHAWCROSS ON WESTERN UNION Sir Hartley Shawcross, the Attorney-General, speaking at Stourbridge last night [March 12th], said that recent tragic events in Czechoslovakia [communist putsch followed by suicide of Masaryk] had brought a new sense of urgency to the movement for western union. [...] SAME NAZI TECHNIQUE [...] Step by step I have been forced more and more to the conclusion that the aims of Communism in Europe are sinister and deadly aims. I prosecuted the Nazis in Nuremberg. With my Russian colleagues I condemned Nazi aggression and Nazi terror. I feel shame and humiliation now to see under a different name the same aims pursued, the same technique followed, without check. [...]

This Times article does not claim to be based on an AP press release, nor does it contain the following sentences, sometimes quoted with other wording:

"I believe now that Hitler and the German People did not want war. But we declared war on Germany, intent on destroying her. In this we were encouraged by the Jews around Roosevelt. This was said to be in accordance with our principle of the 'Balance of Power'. We ignored Hitler's pleading not to enter into war. Now we are forced to realize that Hitler was right. He offered us the co-operation of Germany. Instead, since 1945, we have been facing the immense power of the Soviet Empire."

I have good knowledge about cutting videos, including Special effects, Titles and so on. If you need Flash videos, I can contribute them. I have the hardware and software as well.
Here I stand. I can do nothing else. God help me! Amen. - Martin Luther
Top

CODOH should promote the values of Paul Rassinier, peace and freedom.
Last edited by wtfhappenedtohess on Sun Nov 15, 2009 2:21 am, edited 1 time in total.
Top

An interesting pic I came across and would fit pretty well to the future website maybe: 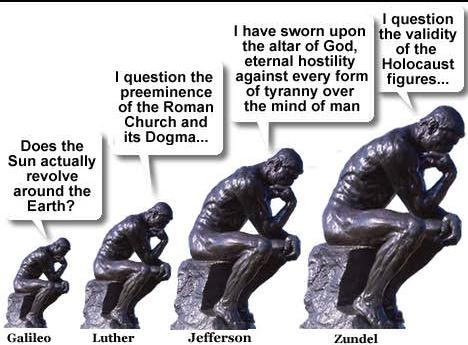 If a "CODOH" typo was added, maybe with the forums internet adress, would make a cool pic also:


P.S.: I am working on a project for the website at the moment .

Idea for a new link to the CODOH website: @Mods:
Spent my entire weekend on these, need some opinions now before I spent another week to complete/add new ones to these.
Its very time consumptive, and I really wanna know now if its an attempt liked by the community or not.

If not I need to start all over with a new approach.

@Community:
Thats what I got so far. Already have a nice idea for zundel/germar, but havent started yet. If you like the style, I am gonna fine tune the ones above and will head on this road.

Good work Halo, I like the second logo, the one with the barricade, the wording could be developed more.

As for the Dresden ones, I think the Vonnegut quotes shouldn't be used, Slaughterhouse 5 was a work of fiction after all.
Top
Post Reply
114 posts