The Bundesarchiv have no original Nuremberg Trial documents. Write and ask them. They'll tell you. They told me.

That has been my suspicion. I have a friend who asked them and
got a negative answer too. I will write them, thanks.

My personal suspicion is that the document has simply been retyped, substituting the word "executiert" for "evakuiert".

Why talk about Jews if your military concern is with partisans? Who is going to fill in all those holes? On the other hand, 360,000 people can be evacuated without having to fill in any holes at all, and may be compatible with military necessity, at least as much as shooting them. Indeed, evacuation is part and parcel of any anti-guerrilla war.
Top

The question is, where do all the Jews come from who were allegedly employed as slave labor or were massacred by the Germans in the Soviet Union?
Top


Wow. What sources?
"The coward threatens when he is safe".
- Johann Wolfgang von Goethe
Top

This would come for 10 million evacuees to about 2.5 million Jews.
Top


Doesn't that work with the numbers given at the Wannsee conference? 11,000,000 Jews I think it claimed.
"The coward threatens when he is safe".
- Johann Wolfgang von Goethe
Top

The 11,000,000 in the so called "Wannsee-Dokument" also comprise Jews in countries an areas we never occupied (like: UK, Ireland, Spain, the biggest part of the USSR, Sweden, Switzerland, ...).
"Everything has already been said, but not yet by everyone." - Karl Valentin
Top

Carl O. Nordling estimated in ‘Wie viele Juden gab es in Reichweite von NS-Verfolgung und potentieller Vernichtung?” (How many Jews were within the reach of NS-persecution and porential extermination?)

Michael Mills comes up with an absolute maximum of 4,999 million Jews in areas under German control:

The statistics on the Jewish population of Europe included in the Wannsee Protocol are manifestly exaggerated; most historians concede that, and do not take them seriously.

Now, the 5.0 million given for the Soviet Union includes the Jewish populations of the territories annexed in 1939 from Poland, and in 1940 from the Baltic States and Romania. Since for the purposes of calculation we are considering only the Jews of the Soviet Union and Poland, we need to exclude the Jews of the Baltic States and the territories seized from Romania (Bessarabia and Bukovina); these totalled approximately 0.5 million (0.25 million for both areas).

Deducting 0.5 million from 8.1 million leaves 7.6 million. That figure may be compared with the true total for the Soviet Union and Poland.

According to the Soviet census of 1939, there were just over three million persons of Jewish nationality in the country at that date. However, it is known that the census was falsified to hide the massive population losses due to the famines and purges of the 1930s. It is not known how many Jews there really were, however defined, but we can adopt three million as a ball-park figure.

The last Polish pre-war census gave two different figures for the total number of Jews, 2.8 million by nationality (defined as speakers of the Jewish languages Yiddish and Hebrew) and 3.1 million by religion. Again, it is known that the Polish census was falsified in order to minimise the size of the dissident ethnic minorities (Ukrainians, Belorussians, Germans). Again, we can adopt three million as a ball-park figure.

Thus, we arrive at 6.0 million as the total for the Soviet Union and Poland. The derived total in the Wannsee Protocol of 7.6 million is therefore exaggerated by 1.6 million. Deducting 1.6 million from the alleged Europe-wide total of 11 million leaves 9.4 million.

Furthermore, the figures for France are also grossly exaggerated. The Wannsee Protocol gives the following total:

In fact, it is known that the toal number of Jews in France in 1940 was about 340,000, including French citizens and refugees from Germany, the Netherlands and Belgium, and resident aliens from a number of countries.

Accordingly, the Wannsee Protocol's figure for France is exaggerated by about 525,000. Deducting that number from our adjusted Europe-wide total of 9.7 million leaves a new adjusted total of 9.175 million.

However, that adjusted total is not an accurate guide to the number of Jews who might have perished at German hands, since it includes countries that were never occupied by Germany; they need to be deducted, as follows:

Deducting that total for unoccupied countries from the adjusted Europe-wide total of 9.175 million leaves 8.748 million as the pool of potential victims.

A further adjustment needs to be made. The above total includes the entire Jewish population of the Soviet Union, but it is well-known that only the western part of that country was occupied by Germany, and furthermore a large number of Jews from the areas that were eventually occupied were evacuated by the Soviet authorities or fled before the Germans arrived.

The figure for Soviet Jews who never fell into German hands needs to be deducted. Some authorities such as Hilberg postulate that a good three million Jews survived in the Soviet Union, and that can be used as a reasoanble ball-park figure.

Deducting 3.0 million from 8.748 million leaves 5.748 million. That is the absolute maximum of the Jews who fell into German hands, and therefore could have been killed by them. However, there was a considerable number of Jewish survivors at the end of the war in the German-occupied territories. A by no means exhaustive calculation of the survivors includes:

Deducting 860,000 from 5,748,000 leaves 4.888 million as the ABSOLUTE MAXIMUM number of Jews who could have perished at German hands. That figure would need to be adjusted downward to take account of Jewish survivors in other formerly occupied countries; for example, I have not included any figure for Polish Jews who survived, but their number is reliably estimated by historians as in the low hundreds of thousands, perhaps more than half a million.


They should have told you that the originals are at The Hague.
Top

They should have told you that the originals are at The Hague.

They did tell me. So did the National Archives in Washington DC. The originals are not there, either. I went to look at them. So can you. You can write to them for an appointment. They are very helpful. Why not give it a try?
They are very slow answering their mail because of all their current Yugoslavian "war crimes trials" nonsense.
Top

I suggest that Gertrud access Carlos Porter's site for great examples of the Nuremberg documents fraud.

(Hitler noted as a discussion point with Hitler a.o.: »Judenfrage / als Partisanen auszurotten« . The meaning is for German ears obvious: those Jews who are caught as partisans have to be »auszurotten«. Christian Gerlach, the author of the study Die Wannsee-Konferenz, das Schicksal der deutschen Juden und Hitlers politische Grundsatzentscheidung, alle Juden Europas zu ermorden also understands it this way.)

How would you translate “als” in this case?

I guess it's about this document. 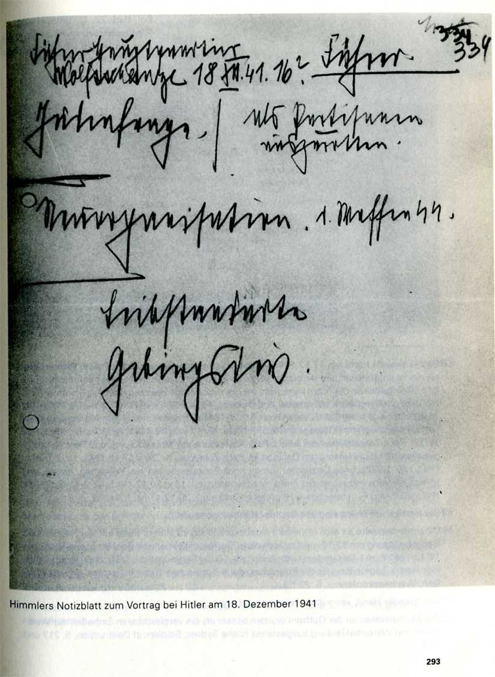 The "as partisans to be eradicated" (als Partisanen auszurotten) seems to be a later addition on that paper. Nevertheless a strict reading would be indeed that, if they are found to be involved in partisan activity, they'd have to be eradicated.
That partisans and their helpers, were executed, when apprehended is not what is in dispute.

A general order to kill all Jews would read differently.