The same that is said about Hitler and the NS govt. can just as easily be said of Roosevelt and the maniacal US govt.

Roosevelt spews hate propaganda to the US masses:

US media mesmerizes US public:

Japs on way to gas chamber:

Good post Hannover. To be complete, it could be added extracts of speeches by US authorities similar to the Himmler's at Posen.

Concerns over the loyalty of ethnic Japanese seemed to stem as much from racial prejudice than evidence of actual malfeasance. Major Karl Bendetsen and Lieutenant General John L. DeWitt, head of the Western Command, each questioned Japanese American loyalty. DeWitt, who administered the internment program, repeatedly told newspapers that "A Jap's a Jap" and testified to Congress,

I don't want any of them [persons of Japanese ancestry] here. They are a dangerous element. There is no way to determine their loyalty... It makes no difference whether he is an American citizen, he is still a Japanese. American citizenship does not necessarily determine loyalty... But we must worry about the
Japanese all the time until he is wiped off the map".[20][21]

According to a Los Angeles Times editorial,

A viper is nonetheless a viper wherever the egg is hatched... So, a Japanese American born of Japanese parents, nurtured upon Japanese traditions, living in a transplanted Japanese atmosphere... notwithstanding his nominal brand of accidental citizenship almost inevitably and with the rarest exceptions grows up to be
a Japanese, and not an American... Thus, while it might cause injustice to a few to treat them all as potential enemies, I cannot escape the conclusion... that such treatment... should be accorded to each and all of them while we are at war with their race.[29] 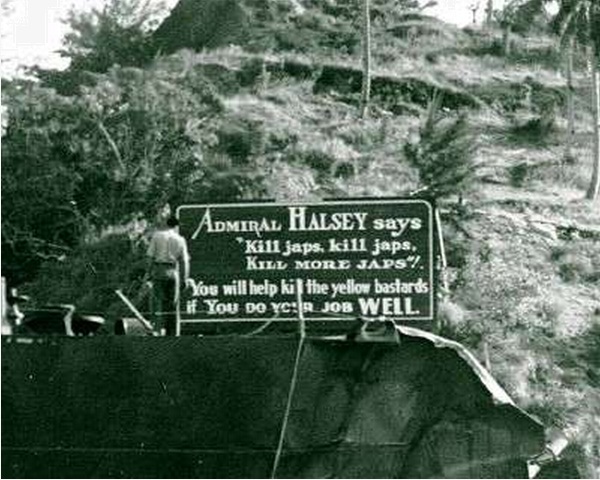 "Truth is hate for those who hate the truth"- Auchwitz lies, p.13
Top

Can you explain the situation of this picture please? It looks like a US navy ship and that Admiral Halsey was urging his troops to do well in battle. Nothing wrong in that, happens all the time. Shakespeare spoke of it in his plays and if one was to read books on the Falklands war you would read that on the ships, which included the QE2,down to the war zone the Royal Marines and Paras were vigourously encouraged to hate the enemy. They were also pitted against each other en route, so that when they disembarked they were ready to kill. Something that they did very well.
'Of the four million Jews under Nazi control in WW2, six million died and alas only five million survived.'

borjastick wrote:Can you explain the situation of this picture please?

Google is your friend

http://www.history.navy.mil/photos/images/g250000/g259446d.htm
It does illustrate the point that in war hatred is encouraged and we should see German hatred for Jews in this wider context.

Exactly. However, we never see signs posted at German war fronts or in propaganda saying "Kill the Jews! Kill kill kill the Jews!" One could be sure that if such inflammatory slogans existed in NS Germany, it would be shown millions of times over and over. We see typical caricatures of Jews, often getting a boot out of Germany and I remember seeing one troop transport with something along the lines of "we travel to Poland to beat the Jews" or something like that but NEVER in my studies of the wehrmacht (my primary focus of studies) have I ever seen something overtly saying "kill jews" or even "kill Russians" for that matter.
Top

Okay, I found the picture I was referring to. It says "We travel to Poland to trash the Jews." Clearly genocidal mad men!

This brings to mind this picture. We see a stereotypical picture of a pretty blonde American girl, staring at a skull. The skull is that of a dead Japanese soldier that her boyfriend had sent home to her with the words "Here is Tojo, a good Jap, a dead one." This picture was featured as Time LIFE's picture of the week. Now keep in mind Julius Streicher was executed for his publication Der Sturmer, a magazine regarded more as a tabloid by contemporary Germans, that incited racial hatred against the Jews. Should the editors of Time LIFE be executed?? Imagine this image appearing in ANY German publication of the time, let alone as well respected as Time LIFE.

Now let's look at America's Best Comics. Note the "Aryan supermen" that appear as the heros, with their stereotypical "Nordic physique." One even wears all black with a death's head insignia on his chest. Now look at the villains. Exaggerated, racist portrayals of Germans, Italians and Japanese. And this was geared toward America's youth. Now imagine a similar publication called Germany's Pride or something like that being geared for German youth. Imagine how "horrific" the "racial indoctrination" of young, impressionable minds would be denounced today.

Point is, to hold Germany on a pedestal, is to pretend the US propaganda and actions didn't exist. Context is everything.
Top

A fact I didn't know: the deportation towards USA of civilians of Japanese, Italian or German ethnicity from their Latina American countries.

About 3,000 Japanese, Germans, and Italians from Latin America were deported to the United States, and most of them were placed in the Texas internment camps. Twelve Latin-American countries gave the United States Department of State custody of the Axis nationals. Eighty percent of the prisoners were from Peru, and about 70 percent were Japanese. The official reasons for the deportations were to secure the Western Hemisphere from internal sabotage and to provide bartering pawns for exchange of American citizens captured by Japan. However, the Axis nationals were often deported arbitrarily as a result of racial prejudice and because they provided economic competition for the other Latin Americans, not because they were a security threat. Eventually, very few Japanese ever saw Latin America again, although some Germans and Italians were returned to their Latin American homes.

What issue of LIFE did that picture of the pretty blonde with a skull appear in? Imagine that photograph with the exact same caption except the word "Arizona" is replaced with "Berlin" and "Jap" is replaced by "Jew" and it had been published in a German news weekly. It would be more famous than those shrunken heads.
"First of all there is the fact that if we assume the Holocaust to have happened more or less as told, all the evidence becomes intelligible, while if we assume it was a hoax, most of the evidence does not make any sense." - Robert Jan Van Pelt
Top

Anyone know how many died within the camps? From what I've read there were many who died from improper medical care, etc, but I can't seem to find a death toll anywhere.

I'm assuming DDT was used as a disinfectant in these camps. How odd it would have been if a typhus epidemic had struck these camps without adequate delousing. If this had been the case, would we have been seeing pictures of these Japanese American typhus victims and be told wild "gas chamber" tales?

And yes, the fact that Japanese were actually sent from South America to US concentration camps is something rarely discussed.

This recycled picture stinks of tampering, the drawing & text looks very 'added-on' after the fact. It's absurd to imagine the disciplined German Wehrmacht with a train so painted: "We travel to Poland to trash the Jews." If they were headed to Poland "to trash the Jews", then that's exactly what they would have done, but they clearly did not. They trashed the incompetent Polish Army, but that's another matter.

Lot's of black ink, but no sign of 'experiments'. Anyone could blob some ink on the pictures of the Japanese-American kids pictured previously and say the same thing. Well actually, there are plenty of very real gruesome pictures of Japanese after the genocidal atomic attacks.

With the 'holocaust', the Jewish supremacists can, have, and do just make things up.

Ask for proof and you may go to jail.

While I agree that this picture is pretty suspect to say the least, that's not really the point. Basically I was expounding on your original post's thesis. Anything that can be said about the Germans can be said about the Americans. Faked or not, this "trashing" is the worst they can dredge up against the Germans. Never do we see anything as inflammatory as "kill the jews!" or mutilated Jewish corpses in contemporary wartime German publications yet the American publications were so proud of this morbid picture that it was the picture of the week. Imagine if the Japanese had won. The case against the Americans is far stronger than the Germans.
Top

It is completely absurd to believe that the Nazis would welcome Jews into the military while plotting a policy of total genocide. As far as German anti-semitic propaganda goes, much of it is post-war invention, and so called writings of Julius Streicher and Robert Ley should be read with suspicion as their over the top calls for the annhihilation of Jews are probably retro-fitted forgeries conforming to the hoaxed Holocaust narrative.
Top
Post Reply
14 posts • Page 1 of 1