continue to educate future generations about the unique horror of the Holocaust.

The monument will be located near downtown Ottawa, just down the road from Parliament Hill and across the street from the National War Museum, where the announcement was made.

Tim Uppal, the minister of state for democratic reform, calls the memorial a testament to the importance of preserving the memory of the Holocaust.

"This central location will attract a large number of visitors. It will encourage people to reflect upon the events of the Holocaust, remember the victims, and pay tribute to the survivors," Uppal said.

"It will also encourage people to reflect on the responsibilities each of us has to protect human rights and dignities."

Immigration Minister Jason Kenney was also on hand for the announcement.

"The Holocaust stands alone in the annals of human history for its systematic cruelty and for the brutal murder of six million innocent Jewish men, women and children," Kenney said.

"It is essential that we never forget the lessons of the past and continue to educate future generations about the unique horror of the Holocaust.

This important monument is one way that we can do so."

"There is a clear understanding that this monument is a testament to every Canadian who believes in standing up for tolerance and human rights."

No details about the design of the monument, which is scheduled to be completed by 2015, have been released.

The alliance is an intergovernmental body made up of government officials and experts from 31 countries that's devoted to fostering and promoting Holocaust education, remembrance and research around the world.

"Canada will work with all alliance member countries to implement an ambitious, multi-year work plan that includes research into Holocaust killing sites outside of major death camps, the development of educational resources for teachers, and strengthened relationships with international partners," Silva said last month.

What do we anti-holo criminals have?
Few websites...Few modest publication houses...

Our opponents have anything they could dream about: from mass propaganda in press,books and movies to a full support of holo-prostituted governments...

And they are still losing...

GATINEAU, QC, Oct. 24, 2013 — The Honourable Shelly Glover, Minister of Canadian Heritage and Official Languages, and the Honourable John Baird, Minister of Foreign Affairs, today announced the six teams that were chosen as finalists in a national design competition to create concepts for the future National Holocaust Monument, which will be built in the heart of Canada's capital, at the corner of Booth and Wellington streets, near the Canadian War Museum.

"The future National Holocaust Monument will honour the Canadian victims and survivors of the Holocaust," said Minister Glover. "Canada is an extraordinary, welcoming country, and we are all responsible for ensuring that the Holocaust continues to have a permanent place in our national consciousness and memory."

"Canada remembers the suffering of the millions of innocent victims of the Holocaust," said Minister Baird. "This monument will preserve their memory and also educate visitors of all faiths and traditions about the causes and risks of hate. I am proud that this memorial will stand at the heart of our country, right here in the nation's capital."

A Call for Qualifications was launched in May 2013, inviting teams of professional artists, architects, landscape architects and other design professionals to submit their credentials and examples of prior work at the first stage of a two-phase national design competition. Teams had to be led by a Canadian citizen. International candidates were, however, deemed eligible as team members.

Ministers Glover and Baird said they were pleased with the high calibre of the teams—which shows the importance of the project—and look forward to seeing the inspiring design ideas they will present.

The jury, made up of internationally renowned art and design professionals, a representative from the National Holocaust Monument Development Council and a Holocaust survivor, chose the following six teams as finalists:

The teams will spend the next few months developing their designs, which will be presented to the National Holocaust Monument jury in the winter of 2014. Prior to the jury selection, a public exhibition of the models will take place, at which members of the public will have the opportunity to meet the artists and share their opinions on each design. Their comments will be compiled and shared with the jury.

It is important for Canadians and the rest of the world to remember the suffering and murder of millions of Jews and others in the Holocaust.

How could we forget? every day, it's "Holocaust day" in the media

The Prime Minister, Justin Trudeau, today participated in a site dedication ceremony for the National Holocaust Monument, which is being built at the corner of Wellington and Booth streets in Ottawa.

The Monument, which is scheduled to be unveiled in 2017, will honour the millions of Jews and other innocent victims who died in the Holocaust. It will also promote a better understanding of the historical events surrounding the Holocaust and how they affected Canada, and celebrate the tremendous contributions that Holocaust survivors have made to this country.

“It is important for Canadians and the rest of the world to remember the suffering and murder of millions of Jews and others in the Holocaust. We must never forget the stories of the victims, and the important lessons of the Holocaust. As Canadians and citizens of the world, we must fight the hatred and fear that once fuelled these deplorable acts, and ensure that tolerance and pluralism always triumph over anti-Semitism and racism. We must also pay tribute to the resilience of those who survived that horrific ordeal and went on to make enormous contributions here in Canada as well as many other countries around the world.”

“This national monument will stand as a testament to the suffering of the millions who lost their lives and families to the Holocaust and tell the stories of those who came to Canada to build a new life. The Monument will serve as a reminder to future generations of Canadians to keep the lessons of history alive in our country’s consciousness. We must never take for granted our freedom, diversity, and deep commitment to human rights.”

Quick Facts
◾The design of the Monument, entitled “Landscape of Loss, Memory and Survival,” was developed by Team Lord of Toronto and depicts a stylized star, created by the confluence of six triangular shapes, or “volumes,” that are organized around a large gathering space for ceremonies.
◾The fully integrated design uses architecture, landscaping, art, and interpretation to communicate the hardship and suffering of victims while conveying a powerful message of humanity’s enduring strength and survival.

You have to think big:

With museums sprouting up like poisonous mushrooms, the "Luna Holo Museum" is no doubt being planned, ...
. 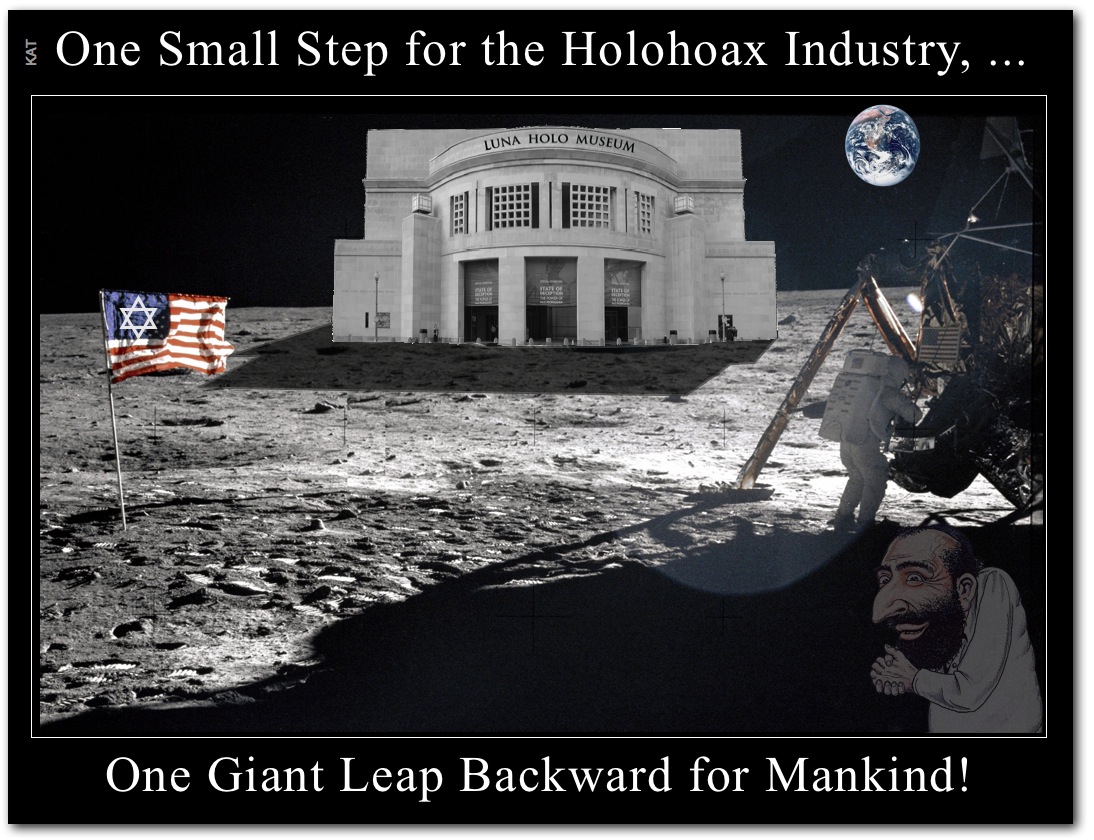 This should be inscribed on the facade of this fake 'monument', aka: Potemkin Village:

These Holocaust deniers are very slick people. They justify everything they say with facts and figures."

"It will encourage people to reflect upon the events of the Holocaust, remember the victims, and pay tribute to the survivors," Uppal said.

Why would anyone pay tribute to a survivor?
What sense does that make?
Definition
1 an act or a statement or a gift that is intended to show gratitude, respect or admiration
2 a payment made periodically by one state or ruler to another, especially as a sign of dependence

Is it normal to pay tribute to victims of crimes, as holocaust survivors are portrayed to be?
If a member of ISIS drives a car through a crowd of people do we owe gratitude or admiration or payments to the survivors?
Do we pay tribute to rape victims?
It's one thing to memorialize victims, but it's odd to view victims as heroes.
Top
Post Reply
10 posts • Page 1 of 1