OK sweetie pie. So far the ping pong of this thread seems to be about whether focusing on this picture is a)important and b)will it help revisionism at all in the wider context. The discussion or argument could go on forever. If that floats your boat then fine. I don't think this picture is important in the essence of the holocaust truth. It is a contextual and supportive issue but hardly the main one and arguing about fake photos with an exterminationist won't win anything.

The WE I was referring to is our own individual choice of what battles to concentrate on. In any situation in life when the going gets tough it is, in my experience, best not to fight on too many issues. It just gets mucky and confused. It also gives the opposition plenty of targets to hit.

My next point about us all being free to choose what aspects to focus on is more of the above. We are individually free to choose what we want to confront in this landscape. If you pick too many arguments you will eventually get a smacking. Trust me on that one.

I don't explain to anyone whether my observations and comments have furthered the revisionist cause. In over ten years on this path I have done plenty, some public and much privately and behind the scenes. My voice makes some noise, many voices make plenty of noise. The revisionist cause has been furthered massively in recent years. Much of that has been done by this website, people like Haldan, Astro3, Hannover, Kingfisher and perhaps 1% by me. They don't answer to me and I don't answer to them or anyone else. No one is counting here Sweetie Pie.

We each do our bit, individually, having read, discussed and learned from those who have gone before and know much more than us. C'est la vie...
'Of the four million Jews under Nazi control in WW2, six million died and alas only five million survived.'

Kingfisher wrote:I've read a lot of the discussion round this and I think there is a good chance it is a fake, but what does it matter? Even if if it's 100% genuine and the soldier really did shoot the woman, what does it say about the Holocaust? Does anyone seriously suggest that at no time throughout the entire war did a soldier in German uniform (or any other uniform) kill a civilian?

It's not worth wasting your time on things that prove nothing anyway and distract from the issue.

I agree with this.

It brings up a thought I've had in regards to this topic for a while now.
What are the biggest issues that demonstrate the holocaust was a lie? What are the points we make in defending our position that have the biggest impact.

I've seen some scholarly work done by revisionists over the last year or so, of which this site has been invaluable. But...as a layman trying to impress others of my limited knowledge I think as Kingfisher does. A possibly faked picture is just as likely to stiffen resolve of those who question the revisionist ideas than the opposite when argued. Amongst the scholars and learned here this issue takes on more importance perhaps but I find that there is so much evidence screaming to be exposed to non revisionists that it is a no brainer...

I think this 'too much is made of this fake photo while larger issues go ignored' is a straw man. Bigger issues have not been ignored. On the contrary.

Most Revisionists at this site and those that are well known, Rudolf, Mattogno, etc. have not ignored other aspects of the false story line. In fact all issues have been addressed in one manner or another. This fake photo is just another stone to look under and let the light shine.

Thoroughness in all regards is what matters and this fake is just another lie which Revisionists have exposed for the nonsense that it is. It seems to me that those who use the stated straw man argument are the ones making an outsized issue of it when compared to the vast amounts of Revisionist research.

Participants here have seen this iconic fake photo used repeatedly at the Simon Wiesenthal Center, various books by the shysters that comprise the 'holocaust' Industry, and on & on. They want their questions about it answered. I do not think Revisionist veterans should scoff at novice interests just because we have 'been there & done that'. I think it just makes good sense to demolish 'holocaust' fakery wherever, whenever it appears, and it appears just about everywhere 24/7.

I know of no topics within the 'holocaust' Big Lie which have been ignored by Revisionsts. If you disagree, then please, get to work.

Creox wrote:
I've seen some scholarly work done by revisionists over the last year or so, of which this site has been invaluable. But...as a layman trying to impress others of my limited knowledge I think as Kingfisher does. A possibly faked picture is just as likely to stiffen resolve of those who question the revisionist ideas than the opposite when argued. Amongst the scholars and learned here this issue takes on more importance perhaps but I find that there is so much evidence screaming to be exposed to non revisionists that it is a no brainer...

You seem to be saying you're a relative newcomer who has learned much of what you know at this forum.

No one in this thread has required you or anyone else to use this picture in your revisionist arguments. The fact that someone wanted to get other member's opinion about its credibility is no reason for starting up an argument against "using it." If I, for example, were to talk to others about it, or include it in an article about fake holo photos, would you think I was doing some kind of damage to holocaust revisionism by not writing or talking about "more important" topics instead? I just find this train of thought somewhat strange. Everything under the sun comes up on this forum, and no one usually says it is a waste of time.

This picture is not possibly fake, but is definitely fake. All the atrocity photos of supposedly Nazi "crimes" are fake in one way or another. You can take that to the bank. But you don't have to believe that or talk about that to others if you don't feel sure about it yourself. It's that simple ... isn't it?

The photo is much better visible here (click to enlarge):

He is not aiming at her neither at the kneeling civilians.

Did you notice that one of the kneeling persons who are allegedly digging their grave because they are going to be shot wears a uniform and has a nazi helmet on...I guess he is going to be shot too... 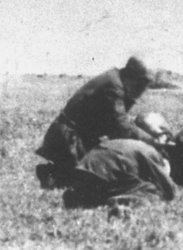