Here is a map of the Katyn graves with the main graves highlighted.

The highlighted region has an area of 1.65 hectares. The number of bodies is a little over 4,000. Bodies were buried up to 12 deep.

The entire Treblinka upper camp supposedly had area ~4 hectares. In the story, at least half of that was taken up by barracks, cremation sites, gas chambers, etc., so only 2 hectares were available for burials. With the density with which the NKVD buried bodies, that would be enough for 5,000 bodies. So how could the Germans have buried >700,000 bodies in this area?

The available area gets even smaller when Sturdy Colls' findings are taken into account...

It's a good point. And the room for the bodies at Treblinka is ridiculous.
Top

If the orthodox story were true and all trace of the bodies removed, there would still remain massive soil disturbance. this would result not only in differences of level but, perhaps more obviously, differences in vegetation growth due to different soil quality, differences in compactness, disturbance of existing vegetation, etc.

While probably visible at ground level, these differences would be screamingly obvious from air photos, probably even today, but certainly in the post war years. Such air photos are regularly used by archaeologists. As far as I am aware none have ever been produced.
Top

Here are photos at the exact time of the alleged activities at Babi Yar. There is simply nothing occurring.
Sept., 26, 1943: 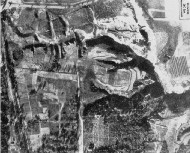 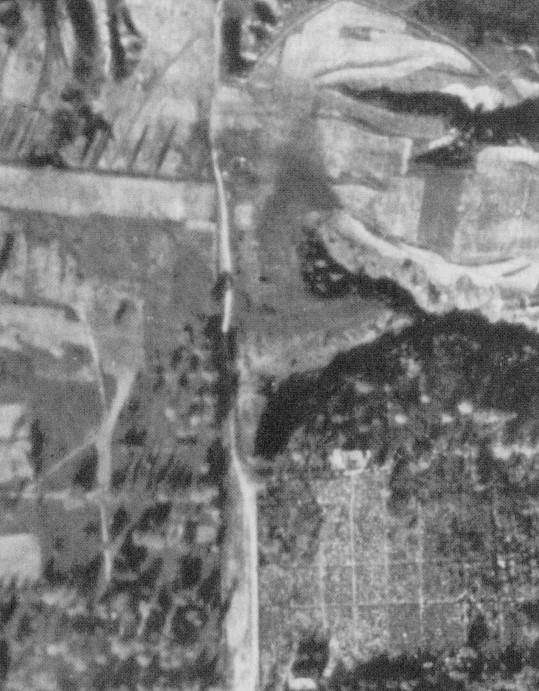 This particular photo was taken during the exact time of the alleged exhumations & cremations of supposedly, tens of thousands (cremation furnaces alleged to have been made from Jewish tombstones from nearby cemetery, cemetery shown in photo). The photo is available from the U.S. National Archives and is listed as: GX 3938 SG, exposure 105. If the alleged event were true, we would be seeing the massive cremations in progress, large numbers of German soldiers, equipment, the actual disturbed site, etc. We see nothing of the sort.

Wikipedia has alot on the subject Babi Yar. Is that info there not true?
Top

No, it is not true. For more on the fraudulent claims about Babi Yar key in Babi Yar in the search function here.

No mass graves as alleged, no Babi Yar as alleged. In fact, you can say that about the entire 'holocaust' story line.

I'm going to take another look at wikipedia's Babi Yar page and get back to you. However as it stands the legend of Babi Yar is ridiculous and so far fetched as to be unrealistic. The thing is with any research you undertake Landulf, is to apply the litmus test of logic, common sense and realism. Some of the many stories and claims about the holohoax simply don't add up, they are crazy and over the years the holocaust management team remove them oh so carefully from the mainstream. Take for example claims of killing rooms with electric flooring, and the numbers of claimed deaths at places such as Treblinka, with no proof.

Anyway welcome and good luck, you will soon be addicted as many of us are on the subject. Babi Yar is as good a place to start as anywhere.
'Of the four million Jews under Nazi control in WW2, six million died and alas only five million survived.'

OK Landulf as Hannover says the best research tool is to use the search facility here to read about the dates, population movements and various crazy claims concerning Babi Yar. However in answer to your question re wikipedia there are some very loud alarm bells to be aware of.

In the months that followed, thousands more were seized and taken to Babi Yar where they were shot. It is estimated that more than 100,000 residents of Kiev of all ethnic groups,[27][28][29][30][31] mostly civilians, were murdered by the Nazis there during World War II.[11][32] A concentration camp was also built in the area.

Mass executions at Babi Yar continued up until the German forces departed from Kiev. On January 10, 1942 about 100 sailors from a military flotilla were executed there. In addition, Babi Yar became a place of execution of residents of five Gypsy camps. According to various estimates,[according to whom?] during 1941–1943 between 70,000–200,000 Roma people were rounded up and murdered at Babi Yar.

They then talk about German soldiers and their cohorts digging up every single body, cremating them and spreading the ashes over surrounding fields. So there are the ashes of as many as 250,000+ people in the locality. Where are the body and bone remains, the teeth? How did they do such an amazing job in cremating these people to such an extent that no one is able to find the remains?

Estimates of the total number killed at Babi Yar during the Nazi occupation vary. In 1946, Soviet prosecutor L. N. Smirnov at the Nuremberg Trials claimed there were approximately 100,000 corpses lying in Babi Yar, using materials of the Extraordinary State Commission set out by the Soviets to investigate Nazi crimes after the liberation of Kiev in 1943.[32][35][36][37] According to testimonies of workers forced to burn the bodies, the numbers range from 70,000 to 120,000.

Oh dear me this is unravelling faster than a hooker's knickers. Above we were told the bodies were all cremated and the ashes spread around, now the Russians say they found 100,000 bodies. Like you I am confused and still waiting to see some photographic evidence. The Russians were desperate to hide their own crimes and blame Germany they lied by the ton at Nuremberg.

In wiki they also quote Michael Berenbaum. He is my number one in terms of lying and manipulating the 'facts' to fit the story. This guy is a shyster of monumental proportions. Anywhere you see him pop up you know that the lies and spin will be in perpetual motion.
'Of the four million Jews under Nazi control in WW2, six million died and alas only five million survived.'

... we were told the bodies were all cremated and the ashes spread around ...

And the story goes that the supposed cremation 'ovens' built alongside Babi Yar ravine were made from Jewish tombstones taken from the nearby cemetery. No joke, that is what Jewish supremacists claim.

Revisionists are just the messengers, the stupid impossibility of the 'holocaust' story line is the message.

Is there even any record of a cemetery having been there?
Top

Yes, there was and still is (I presume) a cemetery nearby.