Is there anyone that know where this pic is taken and the history behind it? It is said to be from late blitz in London, but I want more info.

If memory serves me correctly, the picture was used in the opening and closing titles of the TV series "World at War"
It is human nature to question things. To make that illegal is to deny us of humanity.
Top

I think I remember that too.

World at War intro had such holocaust innuendo: flames on images and then a woman 's image who looked a lot like Anne Frank.
Top

Yep it's all here. You were both correct.

https://www.youtube.com/watch?v=YYh7FsZI10w
'Of the four million Jews under Nazi control in WW2, six million died and alas only five million survived.'

Well, thanks for the replies, but I want to know the story about the boy. This picture was in a magazine about the V-bombs in London and the text says: "This boys sits in the ruins after a V-bomb attack where his parents are killed." I think that is bull, and I want to debunk the magazines claim. That would really make my day...
Top

One way would be to research photo archives from the blitz and v-bombs to see what you come up with but your post should be on the WW2 pages as it's not really to do with the Holocaust unless of course it turns out to be. But then again I am not a moderator so just ignore me.
'Of the four million Jews under Nazi control in WW2, six million died and alas only five million survived.'

Is there a WWII page on this forum?
Top

Well, I think in one way that it is connected to the subject here. The continous falsification of photographs and missleading texts to photos in mainstream media must be stopped. And I fell I can do something about it. I already mailed the magazine and I also mailed Imperial War Museum in London. I will go with this photo until there is nothing left to do. So wish me god luck... Im a moviemaker making commercials with an odd interest in these matters and if I should make a strike, I will make a shortmovie on this photo.
Top

Landulf wrote:Well, thanks for the replies, but I want to know the story about the boy. This picture was in a magazine about the V-bombs in London and the text says: "This boys sits in the ruins after a V-bomb attack where his parents are killed." I think that is bull, and I want to debunk the magazines claim. That would really make my day...

The picture is tributed to Antoinette aka Toni Frissell and is said to be at the Library of Congress.

Toni Frissell, or Antoinette Frissell Bacon, (March 10, 1907 - April 17, 1988) was an American photographer, known for her fashion photography, World War II photographs, portraits of famous Americans and Europeans, children, and women from all walks of life.
.../
In 1941, Frissell volunteered her photographic services to the American Red Cross. Later she worked for the Eighth Army Air Force and became the official photographer of the Women's Army Corps. On their behalf, she took thousands of images of nurses, front-line soldiers, WACs, African-American airmen, and orphaned children. She traveled to the European front twice. Her moving photographs of military women and African American fighter pilots in the elite 332d Fighter Group (the "Tuskegee Airmen") were used to encourage public support for women and African Americans in the military.
http://en.wikipedia.org/wiki/Toni_Frissell 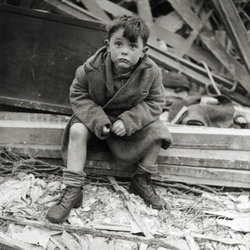 Other pose of the same boy with a stuffed animal toy. 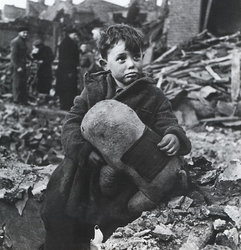 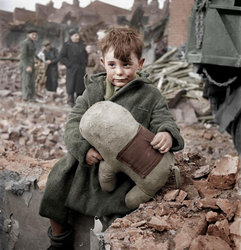 In order to know more about the boy, an investigation in the Frissell's biography could be fructuous.

Other boy in the Blitz 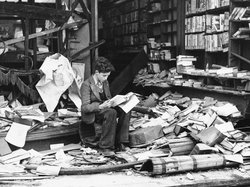 From Wikipedia, children of Esat London in the Blitz 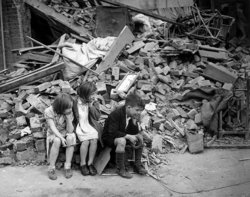 Another one by Roger Mayne 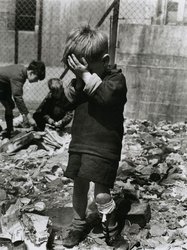 A collection of pictures of the Blitz
http://pinterest.com/sebspence/london-ww2-1-the-blitz/
Top

I think there could be something Psych Warfare about it. Psych Warfare made a big deal of the boy at Buchenwald, and the raw footage is such that a tear in his eye is staged. Raw footage is on US holocaust memorial museum website, Steven Spielberg archive.

The likely photographer of the famous little boy photo, (Warsaw Ghetto Boy photo) is George Kadish and he was going around looking for sad child photos as well.

Life Magazine had Margaret Bourke-White who achieved canonical status as a photographer post WWII. She was a crypto Jew (name changer) doing anti-German propaganda. She put out a book which clearly shows this.

If that photo is real, why is there not follow ups on his life in later years?

Similar also is Robert Capa's (also a crypto Jew) fallen Spanish soldier photo. He got canonical status as an art photographer but his most famous photo was later shown to be staged.
Last edited by Carto's Cutlass Supreme on Sat Sep 07, 2013 3:50 pm, edited 1 time in total.
Top

Just what I thought too, but really dont know where to go from here. He is probably alive today, but its hard when you dont have a name.
Top
Post Reply
12 posts • Page 1 of 1

Users browsing this forum: No registered users and 15 guests