Bars of soap of Jewish fat buried in Cuba

Bars of soap of Jewish fat buried in Cuba

While viewing the video "Limpide dans la Noirceur du Siecle - Roger Garaudy" (Limpide in the Darkness of the Century - Roger Garaudy, http://www.youtube.com/watch?v=VHQ4EDhxp4E), I had the surprise to discover images of a monument where are "buried" several bars of soap made of jewish fat in a Cuban Jewish cemetery (min 17:30).
At the base of its column, ones can read on plaque :

" In tribute to their memory
in this place are buried
several bars of soap made ​​
from human Hebrew fat
part of the 6 million
victims of Nazi barbarism
occured in the twentieth century.
Peace to their remains. "

Intrigued by this story as I visited several times Cuba, I did a brief research to finally find the confirmation of this fact on several Spanish websites. It seems that this Jewish cemetery is in Guanabacoa, a district located at the east of the capital La Habana. This municipality counts two Jewish cemeteries.
On a webpage , after a brief overview of the history of the Jewish community in Cuba, we read:

[...]Most impressive is how far tell us the freelancers Julio Cesar Franco and María del Carmen Carro of UPECI agency, in their article of which the title says it all : "Hebrew Cemetery of Havana in great state of abandonment".
Further, they tell that

" the Jewish cemetery has historical significance because in the same lie the remains of hundreds of children who died from diseases contracted in Nazi concentration camps. Moreover, in the Jewish cemetery was buried the founder of Cuban cinema, Saúl Yelin, whose tomb is in full abandonment. Paradoxically, in an epitaph on his tomb can read phrases such as "for all that he was", "for how much we owe to him" ... Also, it could be noticed that the cemetery is frequented by foreign visitors who, according with the Hebrew tradition, place stones on graves especially at the monument which saves several bars of soap made ​​from human fat of Jews victims of the massacre caused by the followers of the National Socialist Party."

One of these visitors was Steven Spielberg, the billionaire American film producer and director, who, in November 2002, had a 8 hours meeting with the tyrant Fidel Castro and some selected members of the nearly extinct Jewish community in Cuba, and nevertheless spent his time and money to make a propagandistic film in favor of the
regime which drove away his religion's brothers of Cuba and nothing about this cemetery where so many ancestors are buried ..
Source: http://www.mariaargeliavizcaino.com/g-C ... udios.html
Google location http://www.panoramio.com/photo/101217281 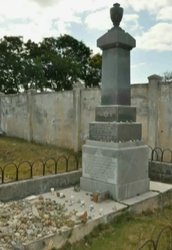 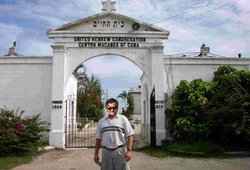 Highly paid by US taxpayers and proven shyster, Peter Black of the taxpayer funded United States "Holocaust" Fantasy Theme Park in Washington, D.C., said questions about the soap are frequently asked by visitors and his answer is:

It didn’t happen. There is nothing we can hold our hats on that would indicate the Nazis tried this even experimentally.

In many countries if someone other than a Jew made such statements they would be imprisoned.

There's soap memorials all over the world: 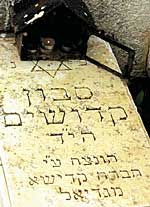 Romania, and yes, that's his holicaustness himself

http://collections.yadvashem.org/photosarchive/en-us/34508.html
Nazis tried to create super-soldiers, using steroids ... they sought to reanimate the dead—coffins of famous Germanic warriors were found hidden in a mine, with plans to bring them back to life at the war’s end.
- Prof. Noah Charney
Top

Laughable 'memorials' but no soap made from Jews, so very symbolic of the fraud in general.

Nice, France, the Jewish part of the Cemetery of the Chateau

[...] The oldest grave in the cemetery is dated 1540: Most of the oldest stones are found around the entrance of the cemetery.
This entry is characterized by a building used as a place of contemplation and honoring in particular the memory of resistants and deportees. Two urns contain the ashes of deportees (left side), and "human fat soap manufactured by Germans of the Third Reich" (right side). 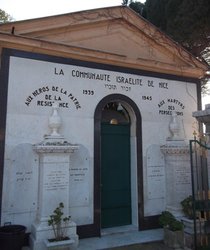 The house and the 2 urns

In Botosani, there is also the large Jewish cemetery famous for its beautifully decorated tombstones.
[...] At the entrance of the new cemetery, a monument "to the memory of millions of Jews exterminated during the Holocaust and the RIF soap manufactured by the Nazis from the exhumed bodies of the Jews in the camps. Remember the horror committed and never forget!
http://weilleleonore.blogspot.com.es/20 ... round.html 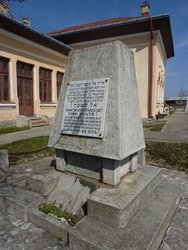 The plaque tells (from Google translator)

Remember!
Here are buried R.I.F. soaps produced from the bodies of millions of Hebrew martyrs exterminated by the Nazi beasts during the Holocaust of 1940-1944. Do not forget!

These are maybe bars of soap made from the bodies of 900,000 Jews as told by Simon Wiesenthal

The last week of March (1946), the Rumanian press announced an extraordinary news: in the small Rumanian city of Falticeni, have solemnly been buried at the Jewish cemetery, during a burial's ceremony in conformity with the rules, twenty cases of soap [... ] the cases carried the mark RIF - "Rein jüdisches Fett" [...] It is at the end of 1942 that was pronounced for the first time the horrible expression "soap's transportation!"

They saw in each piece of soap a Jew that one had made there disappear by enchantment and that one had thus prevented from raising a second Freud, Ehrlich or Einstein [... ] the burial of the soap in a small Rumanian city has something of supernatural. The bewitched pain which lays in this small object of daily use breaks the heart already petrified of the XXe century's man. At the atomic era, the return in the dark medieval kitchen of the witches makes the effect of a spectrum! And yet it is the truth!