Some interesting photos of German delousing operations on the Eastern Front during World War One.

The similarities to the homicidal narrative of WW2 are remarkable.
Top 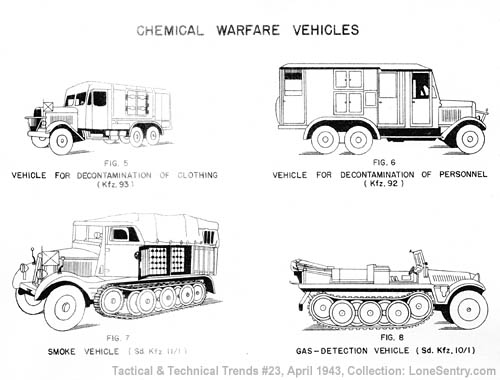 SdKfz 93 was a mobile steam autoclave used for decontaminating uniforms, clothing and bedding. Lice and their nits (eggs) were killed by the heat of steam under pressure. SdKfz 93 had a large closed body with heavy doors at the center of the left side, giving access to the chamber in which contaminated articles were arranged for treatment. Decontamination was carried out by steam or hot-air treatment, mixed with suitable chemicals where necessary. The vehicle was completely equipped with an oil-fired boiler, fans, water tanks, etc., necessary for the work. That machine, like the personnel decontamination truck, was a six-wheel Henschel 23 feet 3 inches in length, 8 feet 2 inches in width, and 10 feet in height, weighing 9.7 tons. SdKfz 93 was an EinheitsDiesel ("Diesel Unit") vehicle.

No doubt those delousing vehicles were the source for the alleged Nazi murderous "gas vans". The Soviets only turned the inocuous diesel exhaust of those special vans into a mass murder weapon.

Another EinheitsDiesel vehicle was the SdKfz 92 van. SdKfz 92 or SonderKraftfahrzeug 92 ("Special Purpose Vehicle 92") was a personnel decontamination van, literally a shower on wheels.


Pictures of delousing facilities at Auschwitz-Birkenau: http://www.cwporter.com/bild2.htm
"But, however the world pretends to divide itself, there are ony two divisions in the world to-day - human beings and Germans.” – Rudyard Kipling, The Morning Post (London), June 22, 1915
Top

The similarities to the homicidal narrative of WW2 are remarkable.

Could be so kind and tell me where these pictures are from? The name of the document?
This could be very useful material.
Carol Stulberg: Were you ever in the gas chamber? Did you see the gas chamber?
Morris Venezia: Of course I was every day over there.
Carol Stulberg: Can you describe to us what it looked like?
Morris Venezia: It’s nothing to describe
Top
Post Reply
3 posts • Page 1 of 1