Here is the caveat for the 2020 edition of Sobibor:

CAVEAT:
The first edition of the present book appeared in 2010. Since that time, the authors have found a wealth of additional documents and testimonies. Most of them are discussed in the two-volume, 1396-page study of 2013 titled The “Extermination Camps” of “Aktion Reinhardt”: An Analysis and Refutation of Factitious “Evidence,” Deceptions and Flawed Argumentation of the “Holocaust Controversies” Bloggers, and authored by Carlo Mattogno, Jürgen Graf and Thomas Kues. It deals with all three “Aktion Reinhardt” camps (Belzec, Sobibor and Treblinka). Readers interested in a more
thorough study of the present topic are advised to also consult this study, which can be downloaded as a PDF file free of charge at www.HolocaustHandbooks.com (Volume 28). Most of the new insights presented in that voluminous study were not included in the present revised edition. However, we have included a research update of May 2018 as a Supplement in Chapter 13 starting on page 401.

We are proud to announce that our series Holocaust Handbooks has a new member coming around the curve: Rudolf Reder versus Kurt Gerstein: Two False Testimonies on the Bełżec Camp Analyzed. This is Volume 43 of the series. We started translating this only after the Italian version of that book had been published. (Because we learn from past mistakes!) It is in the final stages of author review, will go to our copy editor next, and should cross the finish line in early 2021 at the latest.

Furthermore, we have now defined five more volumes of this series, all in various stages of completion by the indefatigable Carlo Mattogno, bringing us unbelievably close to the goal of 50 volumes in total: 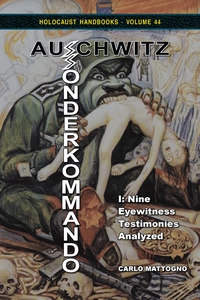 Vol. 44: Sonderkommando Auschwitz I: Nine Eyewitness Testimonies Analyzed: To this day, the 1979 book Auschwitz Inferno by former Auschwitz inmate and alleged Sonderkommando member Filip Müller has a great influence both on the public perception of Auschwitz and on historians trying to probe this camp’s history. This book critically analyzes Müller’s various post-war writings, which are full of exaggerations, falsehoods and plagiarized text passages. The author also scrutinizes the testimonies of eight other former Sonderkommando members with similarly lacking penchants for exactitude and truth: Dov Paisikovic, Stanisław Jankowski, Henryk Mandelbaum, Ludwik Nagraba, Joshuah Rosenblum, Aaron Pilo, David Fliamenbaum and Samij Karolinskij. We are already translating this one.

Vol. 45: Sonderkommando Auschwitz II: The False Testimonies by Henryk Tauber and Szlama Dragon: These two witnesses are held in high esteem among the orthodoxy for their tales about Auschwitz: Tauber on Crema II and Dragon on the “bunkers.” This study dispels the notion that these witnesses’ tales are worth any more than the paper they are written on. We are waiting for the final Italian version.

Vol. 46: Mis-Chronicling Auschwitz: Danuta Czech’s Flawed Methods, Misrepresentations and Deception in Her Auschwitz Chronicle: Danuta Czech’s voluminous book Auschwitz Chronicle is considered the most-important reference book for the historiography of the Auschwitz Camp. After decades of using it, Mattogno has compiled a long list of misrepresentations of source material and outright lies and deceptions that need to be exposed. This mega-fraud of a book needs to be retired from the ample ranks of Auschwitz’s sources. We are waiting for the final Italian version.

Vol. 47: The “Aktion Reinhardt” Camps Bełżec, Sobibór, Treblinka: Black Propaganda, Archeological Research, Material Evidence: The existing three books of the present series on each camp are all outdated, but updating them would lead to much overlap. Hence a new book with all the new insights. We are waiting for the final Italian version.

Vol. 48: The Dachau Concentration Camp: Dachau is one of the most-notorious Third-Reich camps. It’s about time revisionists gave it their full attention. Carlo just started researching this one.

Maybe we should rename Castle Hill Publishers (CHP) into Carlo Mattogno Publishers (CMP)? If anyone doesn’t like the idea – of Carlo dominating the series, that is (we won’t rename CHP) – then feel free to submit your own book project expanding the series! Monographs on Altreich camps are very much appreciated, such as Bergen-Belsen, Buchenwald, Sachsenhausen etc.

Please support our efforts in getting these studies translated and published by either volunteering as a translator, if you have the skills and some spare time, or/and considering a donation to any or all of the above projects as posted on CODOH's project-crowd-funding page.

AND FINALLY, AFTER A FEW YEARS OF DELAY, IT IS HERE! 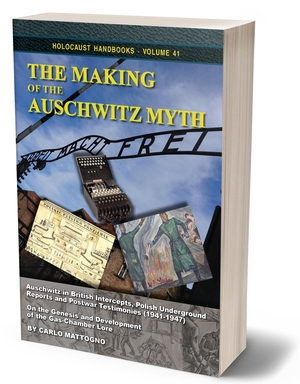 The Making of the Auschwitz Myth

In early 2018, Carlo Mattogno sent us the “final” Italian version of his book The Making of the Auschwitz Myth for translation. Or rather, he sent us two books, as he had decided to split this project into two separate books. We decided to keep it together as one book, however, because we already had announced it as such. We subsequently contracted with Carlos Porter to have it translated into English. When Mr. Porter was almost done with his translation, Mr. Mattogno sent us two new files for this book with “some revisions.” A comparison of the files submitted revealed that he had completely rewritten the first part of this book (ca. 100 pages), which he had detached from the original project and defined as a separate project. The changes were so far-reaching that our translation could not be fixed. We had to start over. A comparison of the other parts of the project revealed that there were some significant changes throughout these 350 pages of text as well, requiring a paragraph-by-paragraph comparison of this entire section in order to identify any changes requiring a rewrite of the translation we already had. Needless to say, we were not pleased… The project got shelved, as other, less-frustrating projects had priority.

This past September, we dusted off this project, requested the files of the published version of this book from Mr. Mattogno (sure enough, there were more changes.…), and started the laborious process of bringing our outdated translation up to the latest and final version of this book.

Finally, it’s done! We apologize for the heavy delay of this project, which initially was slated to appear in late 2018/early 2019. It simply wasn’t meant to be. And here is the gist of it:

C. Mattogno: The Making of the Auschwitz Myth: Auschwitz in British Intercepts, Polish Underground Reports and Postwar Testimonies (1941-1947). On the Genesis and Development of the Gas-Chamber Lore.

The orthodox narrative of what transpired at the infamous Auschwitz Concentration/Labor Camp during the Second World War congealed into its current version in the environs of the Great Auschwitz Trial staged at Frankfurt, Germany, during the mid-1960s. But how exactly did we get there?

On the occasion of the 60th anniversary of the occupation of Auschwitz by the Red Army in January 1945, Carlo Mattogno wrote an article titled “Auschwitz: 60 Years of Propaganda,” which investigated the early history of claims made about Auschwitz. The present study greatly expands on this theme.

It starts out by analyzing radio messages sent by the SS from Auschwitz to their Berlin headquarters between early 1942 and early 1943. Many of these messages were intercepted and decrypted by the British, giving them a fairly accurate picture of what was going on at Auschwitz. Spoiler alert: the biggest drama unfolding there was a raging typhus epidemic.

Next, Mattogno juxtaposes to these SS messages the missives sent by the Polish underground to their government-in-exile in London, which painted a radically different image contradicting subsequently established facts and even at times themselves.

The largest section of this study analyzes the statements of more than fifty witnesses, most of them made during the war and in the immediate postwar period. The focus is on those passages in their statements that contain claims about mass murder by means of gas chambers. The bottom line of this review is that none of the early witnesses reviewed here fully confirms the current orthodox narrative. Instead, their stories are rife with propaganda absurdities and fantastic rumors.

The fourth section of this study analyzes the flawed early attempts by historians to write a consistent history of the Auschwitz Camp, while the last section demonstrates how modern historians twist the record in order to sustain the fiction that the orthodoxy’s fake version of the facts about Auschwitz is somehow “well-documented.

Werd:
Thanks for the update.
M1
Only lies need to be shielded from debate, truth welcomes it.
Top

It's been said before, but it's worth repeating - Mattogno is a machine!
It's easier to fool someone than to convince them that they have been fooled
Top

Only two witnesses have ever testified substantially about the alleged Bełżec Extermination Camp: The survivor Rudolf Reder and the SS officer Kurt Gerstein. For 40 years, Gerstein’s testimonies were the main source of Western mainstream historiography in their attempt to reconstruct what transpired at the infamous Bełżec Camp, where Gerstein said millions of Polish Jews were murdered with Diesel-engine exhaust gases in 1942.

Critical, revisionist voices were raised about Gerstein’s statements early on, spearheaded by a passing remark by Paul Rassinier in his 1961 book Ulysse trahi par les siens (Odysseus Betrayed by His Own), followed by a critical analysis of Gerstein’s claims in his 1964 book Le drame des juifs européens (The Drama of the European Jews), and culminating in the 1985 doctoral dissertation on The Confessions of Kurt Gerstein by French historian Henri Roque. As a result, Gerstein’s testimonies are now discredited even among mainstream historians. One of them classified Gerstein’s account as “a questionable source, and in some respects, it must even be classified as a fantasy.”

In contrast to Western historians, Polish scholars focused on the testimonies of former Bełżec inmate Rudolf Reder early on. After Gerstein had been discredited, Western historians started using Reder’s various depositions to fill the narrative void created by Gerstein’s ignoble removal from the Holocaustian Hall of Fame.

In the first part, the present study presents all of Reder’s various statements in an English translation, then subjects them to critical scrutiny in the second part, demonstrating that they also are “a questionable source” that “must even be classified as a fantasy.” After summarizing and explaining the many absurdities of Gerstein’s claims in Part 3, the author juxtaposes both testimonies, which are for the most part utterly incommensurate.