Germar assured me through email two weeks ago this book was being proofread. And the English translation is the only other handbook that can be expected for the rest of 2016. The Mengele book and the Einsatzgruppen book are both being worked on and only once those two are published will the other ones be tackled.

Again, this is straight from Germar's mouth via email.
http://www.whale.to/b/mind_control.html
Top

The famous Italian Holocaust survivor Primo Levi informed us in his eyewitness account Survival in Auschwitz that a number of sickbays and infirmaries etc. existed in the area of the Auschwitz camp. The present book gives an overview of the camp’s organizational and historical development in this regard. For example, there was a change of policy among Himmler and his entourage toward the end of 1942 regarding the main function of Germany’s concentration camps. While initially reeducation and punishment were their main focus, exploiting the inmates’ productive potential became increasingly important later on. The main reason for this was the ever-increasing needs of the German armed forces for manpower. Another reason for the installation of sanitary facilities were epidemics which emerged repeatedly for a number of reasons and which had to be combatted.

In the first part of this book, the author analyzes the inmates’ living conditions as well as the various sanitary and medical measures implemented to maintain or restore the inmates’ health.

The second part explores what happened in particular to those inmates registered at Auschwitz who were “selected” or subject to “special treatment” while disabled or sick. The comprehensive documentation presented shows clearly that everything was tried to cure these inmates, especially under the aegis of Garrison Physician Dr. Wirths.

The last part of this book is dedicated to the remarkable personality of Dr. Wirths, the Auschwitz garrison physician since 1942. His reality refutes the current stereotype of SS officers. In this context, the statements by the former communist concentration camp survivor Hermann Langbein are particularly revealing.
http://www.whale.to/b/mind_control.html
Top

In the intro to the new printed edition of Treblinka, we see this.

"This is a reprint of the 2005 second edition of this book. Since that year, the authors have found a wide range of additional documents and testimonies. Most of them are discussed in the two-volume, 1396 page study [i]The "Extermination Camps" of "Aktion Reinhardt": An Analysis and Refutation of Facticious "Evidence," Deceptions and Flawed Argumenation of the "Holocaust Controversies" Bloggers, by Carlo Mattogno, Jurgen Graf and Thomas Kues, which deals with all three "Aktion Reinhardt" camps (Belzec, Sobibor and Treblinka). The authors plan to completely overhaul this present study on conjunction with the two monographs in our series Holocaust Handbooks dealing with Belzec and Sobibor (For details see the books advertised in the back of this book). Since this process will take a long time, and because the present book has become virtually unavailable on the book market, we have decided to reprint it, and offer it for retail until the new edition becomes available.

The Chemistry of Auschwitz (color)
The Technology and Toxicology of Zyklon B and the Gas Chambers – A Crime-Scene Investigation
By Germar Rudolf
£47.00

While respecting the victims, whether of foul play or of circumstance, this study nonetheless tries to conduct Auschwitz research on the basis of the forensic sciences, where material traces of the crime and their interpretation reign supreme. Although it is generally agreed that no autopsies of any victim has ever been performed, most of the claimed crime scenes – the chemical slaughterhouses called gas chambers – are still accessible to forensic examination to a greater or lesser degree. So, how did these gas chambers of Auschwitz look like? How did they operate? What were they used for? In addition, the infamous Zyklon B can also be examined. What exactly hides behind this ominous name? How does it kill? And what effect has it on masonry? Does it leave traces that can be found still today?

These and many other questions are thoroughly examined in this study. The horror of Auschwitz is meticulously dissected, and thus, for the first time, it really becomes comprehensible.
This book features 128 color images (and 98 b&w images), hence it is printed in 4 colors throughout. It will appear in early April 2017. You can already order it now!
http://www.whale.to/b/mind_control.html
Top

As one can see on holocausthandbooks here, THE CHEMISTRY OF AUSCHWITZ, is nothing more than a newly titled, and updated version of THE RUDOLF REPORT.
http://www.whale.to/b/mind_control.html
Top

Werd wrote:As one can see on holocausthandbooks here, THE CHEMISTRY OF AUSCHWITZ, is nothing more than a newly titled, and updated version of THE RUDOLF REPORT.

"Nothing more"?
The Rudolf Report is one of the nails in the 'holocaust' coffin. An updated version is a veritable spike.
http://www.vho.org/GB/Books/trr/

Only liars want censorship.
The '6M Jews, 5M others, & gas chambers' are scientifically impossible frauds.
If it can't happen as alleged, then it didn't.
Top

I meant only to eliminate possible confusion that I myself experienced when I saw the book. I thought it was a totally new book. But it is not. It is an updated edition of The Rudolf Report, but it also has an interesting new title.
http://www.whale.to/b/mind_control.html
Top

I meant only to eliminate possible confusion that I myself experienced when I saw the book. I thought it was a totally new book. But it is not. It is an updated edition of The Rudolf Report, but it also has an interesting new title.

“If you cannot say what you mean, your majesty, you will never mean what you say and a gentleman should always mean what he says.”.

rooftop of crematorium no. 2 at Auschwitz / alleged 'gas chamber' 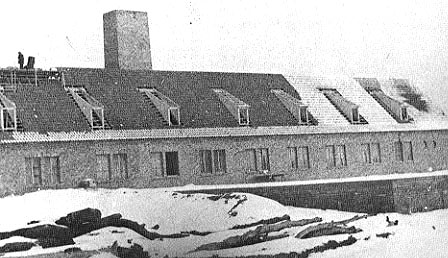 Taken January/February 1943 where there are no such 'chimneys' / columns for the alleged insertion of Zyklon-B.
The 'chimneys' / columns are claimed to have been ca. 2 feet high. The snow is 2-3 inches high. According to Auschwitz "expert" Robert Jan Van Pelt the 'chimneys' / insertion columns, which were said to protrude out from the roof, were added as an adaptation in August, 1942.
If it can't happen as alleged, then it didn't.
Top

Lectures on the Holocaust
Controversial Issues Cross-Examined
By Germar Rudolf

The present book addresses these and many more such issues. In the first section, it starts by defining what “the Holocaust” is and why it is an important topic. It then gives examples demonstrating that it is well to keep an open, critical mind. The second section tells the tale of many a mainstream scholar expressing doubts and subsequently falling from grace due to this “heresy.” The third section discusses in detail the physical traces and documents about the various claimed crime scenes, such as the camps at Auschwitz, Treblinka, Belzec and Sobibor. It investigates the claimed murder weapons: gas chambers, gas vans, crematoria and cremation pits. The fourth section thoroughly examines to what degree we can rely on witness testimony, and it analyzes the pertinent aspects of the most prominent among them. In the last section, the author lobbies for free inquiry and a free exchange of ideas about this topic, exactly because the powers that be can’t face critical questions.

Of all the thousands of books on this topic, this one gives the most-comprehensive and up-to-date overview of the critical research into the Holocaust. With its dialog style, it is pleasant to read, and with its logical organization and index, it can even be used as an encyclopedic compendium.


Notice how in this new English edition, they made room on the front for a picture of Carlo mattogno. The previous English edition only had about 510 pages.
http://www.whale.to/b/mind_control.html
Top

Unfortunately for us though, we'll be waiting about another 2 years for the English edition of the newest German release that just came out a few days ago. I understand that we've waited longer than usual for this one as a pose to the others, but IMO it should've been a consistent English/German release, that way it's at least less work for the translators in the future when we finally get the rest of the upcoming volumes.
Top

Which book are you talking about? I do not know because "The Chemistry of Auchwitz" and "Lectures" both have corresponding German and English releases right now. Do you mean this one?
https://shop.codoh.com/book/99/99
http://www.whale.to/b/mind_control.html
Top

Werd: The current English edition of "Lectures" is the translated version of the 3rd German edition released back in 2015(?). A 4th German edition was just released a few days after the one that just came out.
Top

CognitiveDestruction wrote:Werd: The current English edition of "Lectures" is the translated version of the 3rd German edition released back in 2015(?). A 4th German edition was just released a few days after the one that just came out.

Third, revised and expanded edition of 2017.

B.
Revisionists are just the messengers, the impossibility of the "Holocaust" narrative is the message.
Top

Yes, I'm well aware that the current English edition was just released is the 3rd edition. That's a translated version of the 3rd German version of "Lectures" that was released over 2 years ago(This is the earliest post I can remember: viewtopic.php?p=72149#p72149).

CognitiveDestruction wrote:Yes, I'm well aware that the current English edition was just released is the 3rd edition. That's a translated version of the 3rd German version of "Lectures" that was released over 2 years ago(This is the earliest post I can remember: viewtopic.php?p=72149#p72149).

No, just compare it to the 3rd German edition. It’s the same as the 4th German edition in English.
»[Holocaust soap] odor, if captured and retained… would preserve the core of an individual soul… The undesirable smell of the extract spoke of the spectral Derridian trace… that continued to remind its consumers of their own bio-ontology.«—B. Shallcross
Top
Post Reply
246 posts