A very illuminating and revealing set of pictures from inside the Lodz ghetto during the holocaust has emerged. Shown in today's Daily Telegraph newspaper.

I would ask for comments on what is shown and what is very surprisingly missing. I did not see what I had expected to see. 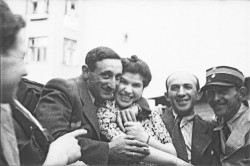 I think that the human figures in the picture of the hanged man were drawn in.

Otherwise, the people appear to be leading relatively normal lives.

This was hardly Devil's Island or the Gulag.
Top

Henryk Ross was working as a photojournalist when war broke out in 1939. When he and some 160,000 other Jews were corralled into a 2.4km-square ghetto in the city’s Old Town, his skill with a camera was seen as an asset by the Germans. Ordered to take portraits of officials, produce identification photos of every inmate and chronicle the efficiency of life under Nazi rule, he soon broke the rules.
Every day, he and his wife Stefania would walk the cobbled streets and footbridges of the ghetto, and, while she took watch, he would flick his gabardine coat to the side and surreptitiously click the shutter. Over four years, Ross accrued almost 6,000 clandestine images, concealing the entire cache from prying eyes. If he’d been discovered, he would have been shot.

When news of the final order for the liquidation reached the ghetto in August, 1944, he packed the negatives into iron canisters, locked them into a tar-lined, wooden box and buried them under the remains of a house, where they lay, mouldering, for seven months.
Incredibly, Ross, his box and around half of the negatives survived. His photographs, acquired by the Art Gallery of Ontario in 2007, have now been published as a book. Memory Unearthed: The Lodz Ghetto Photographs of Henryk Ross by Maia Mari Sutnik is published by Yale University Press priced £25. To order your copy for £20 with free p&p please call 0844 871 1514 or visit books.telegraph.co.uk

It's yet another 'incredible miracle' as an explanation for the impossible.

These is nothing here to prove that the 6,000 !! were clandestine, secretive, and that Ross would have been executed for taking them. I guess the German just kept giving him endless roll after roll after roll of film necessary for taking the alleged secret 6,000 photos without ever asking to see the photos taken on the tons of film they gave him.
And there's that mystical Jewish '6' number again. Laughable.

Nothing indicates an attempt to be secretive about what he was doing. On the contrary, the photos shown are in the open, in sunlight, with the public in full display. This dog don't hunt.

Between September 1942 and May 1944, there were no major deportations from Lodz. The ghetto resembled a forced-labor camp. In the spring of 1944, the Nazis decided to destroy the Lodz ghetto. By then, Lodz was the last remaining ghetto in Poland, with a population of approximately 75,000 Jews in May 1944. In June and July 1944 the Germans resumed deportations from Lodz, and about 3,000 Jews were deported to Chelmno. The ghetto residents were told that they were being transferred to work camps in Germany. The Germans deported the surviving ghetto residents to the Auschwitz-Birkenau extermination camp in August 1944.

So according to them Ross should have been 'exterminated', but like the endless multitudes of profit motivated "survivors" he was not.

Note that copies of these photos are available for sale. Ah yes, the 'holocau$t', "there's no business like Shoah business."

The hanging man looks faked and tossed in with the others, and we see no proof that the area depicted is even Lodz.
It's a poor attempt at damage control as the photos do not show anything like what we are told they should look like.

This one is interesting:

"Falling in the street from hunger in the Lodz Ghetto"

How do they know that? Wouldn't Jews share their food with another Jew, everyone else in the photos look healthy. Could be this guy is simply a down & out drunk passed out like we see everyday in cities all over the world. Or, it could be he got beat up by another Jew or the Jewish cops that ran the place worked him over. And would the local authorities allow a starved dead person to just lay around and be a source of potential contagion? No they would not.

As if we're supposed to be shocked by Jews wearing a Jewish star during WWII, as if that proves the impossible '6M & gas chambers'. And whose idea was it for Jews to wear that star? Oops.

The 'holocaust' storyline is one of the most easily debunked narratives ever contrived. That is why those who question it are arrested and persecuted. That is why violent, racist, & privileged Jewish supremacists demand censorship. What sort of truth is it that crushes the freedom to seek the truth? Truth needs no protection from scrutiny.
The tide is turning.
If it can't happen as alleged, then it didn't.
Top

A few things I noticed.

Mostly the images were of people who seemed quite well in a time of war and privation. Privations that all of europe was subjected to.

Very few military in any of the pics.

The film was time limited in those days and so he would have had to re-supply himself many times, thus he was able to buy film. That alone says how much the place was normal.

No signs of mass murder, mass starvation and bodies.

The fact that the number 6000 was mentioned can come as no surprise to anyone here. They simply cannot resist it.

6000 images would have resulted in about 200 rolls of film, quite a large amount and would have required a large box etc to hide as he claimed.

All in all it's another example of the holocau$t industry.

However I am glad he survived and was able to show us the truth of the Lodz ghetto, it's a very interesting social and historical record.
'Of the four million Jews under Nazi control in WW2, six million died and alas only five million survived.'

I gave them a look, seems like what I see were people who looks like they must have been rather well-off. No wonder they must tell us the most amazing embellishments to "improve" their "suffering".

As our Hannover always says; when examined, the holocaust falls apart faster than a suit bought for a song.

It would be amazing if the Jewish organisations did not set-up media opportunities to promote their version of events.

In the aftermath of the war the British occupation authorities were for ever complaining about Jewish organisations setting-up photo opportunities to portray the British in the worst possible light. In Palestine one trick was to pass on false information to the British authorities. Soldiers would storm into a building planning to arrest terrorists only to be confronted by a mother and her children and a photographer to capture the moment for the eager to cooperate American press.
Top
Post Reply
7 posts • Page 1 of 1