Kingfisher: thanks so much for identifying what I posted! Nice job.

Maybe I'm missing something: the Auschwitz/Birkenau camps were not secret. Indeed they were the biggest Jewish camp in Europe. Many New Yorkers would have been related to these people. People come in and out. Tattoos would be common knowledge. And the the Vrba-Wetzler Report: the secret killing operation there, not the secret whole camp itself.

I'm starting to suspect that some SHAEF governmental group might not have let basic Auschwitz info out, so that they could set up propaganda later. It's odd that NYT Auschwitz reporting is so sparse and this could be why.
Top

The very fact that this tattooing practice wasn't officially sanctioned in all camps makes me begin to doubt the whole thing. Secondly if you add to it the agricultural look and now the claimed delivery system it really begins to stink for me.

The new number blocks are as far away from a tattooing machine as one could possibly get. They would be crude and brutal and frankly as we have seen not very effective.

So I began to research a little into the history of tattooing in the modern era, post Polynesia I mean, to see if tattoo machines were even invented at the time of Auschwitz. If not then it would of course suggest an alternative method be found.

Sadly this is not the case. http://www.britishinkdc.com/tattoo-machine-history/

The Tattoo Machine is a very curious device, its origins lie in the first practical use of an electric motor, a great American inventor and the cooperation of craftsmen from both sides of the Atlantic.

Further down the page and confirmed by reading other tattoo history sites, it shows the history of electric tattoo machines and of course they went on to be common place throughout the world in the early twentieth century.

He did not, I’m sure, see the potential for a tattooing device.

That fantastic leap of vision was left to Samuel O’Reilly, a tattooist in New York City. All tattooing was hand poked, prodded and scratched into the skins of the customer before that fateful day he reputedly walked past the window of an office supply shop on the Bowery, saw the Edison Pen in the window and walked in for a demonstration.

He was a very shrewd business man and must have checked with the U.S. Patent Office, the patent had expired on Edison’s machine and so with a few minor alterations- the inclusion of an ink reservoir at the tip of the barrel and a change from the straight barrel to one with a couple of right angle bends that effectively moved the motor, and thus the weight, an inch and a half back over the hand (that would have cut back a little on the fatigue when using this device) also the needle bar could now accommodate a grand total of three needles – O’Reilly patented the first Electric Tattooing Machine on Dec. 8th 1891.

The world of tattooing would never be the same. The machine itself was not the revolutionary (pardon the pun) concept here, in fact it was simple and rather crude, but the idea that tattooing could be electrified and this notion changed the business forever.

This was the Industrial Revolution in full swing, mechanization was all the rage and inventors came up with new and faster ways to do almost everything. Electricity was a new force that could power motors or induce magnetism in a coil as used in telegraph machines and electric door bells. These door bell mechanisms were the basis for many of the early tattoo machines in Europe and simply had plates welded to them to hold the tubes and needle bars.

So we see that in 1891 the electric tattoo machine as we know it now was invented. Fifty years before Auschwitz etc. It was an immediate hit and was very quickly followed by a similar invention in the UK.

So really when one reads of clumsy tattoos from agricultural blocks that would likely infect and rip the skin rather than make a legible and clean mark when the tattoo industry was in full swing by then I am left thinking this story is a stinker.

I mean why not just pop down to the local tattoo parlour in Gdansk, Munich or Cracow and buy a real machine or rent in the tattoo artist for a few months. Applying a six digit number with a real machine would take but a few seconds.
'Of the four million Jews under Nazi control in WW2, six million died and alas only five million survived.'

So I began to research a little into the history of tattooing in the modern era, post Polynesia I mean, to see if tattoo machines were even invented at the time of Auschwitz. If not then it would of course suggest an alternative method be found.

Adding to your research. They had tattoo machines in Germany sometime at the beginning of the 20th century.

Recently I have taken to going back in time!

No really I have, quite literally. Yes really by using the older pages here to step back in time and see what has happened in the story of the Hoax over the past 12 years or so. It's very interesting and you would be surprised what you might turn up by using the time machine called the back button.

Today I randomly picked page 250. Whereupon I found this little number from December 2003, viewtopic.php?f=2&t=782. It's all about a jewish chap, living in Australia. He claims to have been a tattooist in Auschwitz Birkenau, where, yes you guessed it he survived for several years even though it was a 'death camp'.

Here's what he says about his work and the tools of his tattooing trade.

A piece of wood attached to two needles and a pot of ink were the tools of his trade. Each tattoo, he says, took 30 seconds. Yet those numbers have become long-lasting evidence of the most heinous crime in history.

Now look again at this picture shown in the Daily Mail report and others. It shows how they used to make the tattoos in Auschwitz. This is now the official narrative. 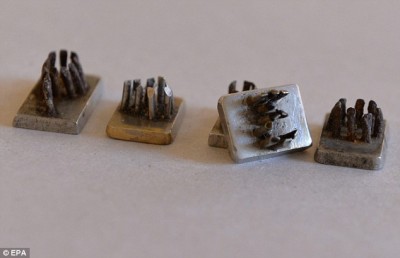 So how does he and them square that little circle?

If you have the time it's well worth delving through the older pages and stories by use of the free Time Machine to see what lies, howlers and cock ups are sitting there.
'Of the four million Jews under Nazi control in WW2, six million died and alas only five million survived.'