I was watching a video on the Hungarian Soviet Republic and was drawn in by the details concerning the dismemberment of Hungary by the Allies after the First World War.

A variety of countries, particularly Romania, were driving their way into Hungary taking whatever land they wanted. The president of the first Hungarian Democracy, Mihály Károlyi was attempting to negotiate with the Allies how much of Hungary would remain Hungarian. There was an armistice treaty signed on November 13, 1918 in Belgrade which settled the borders of Hungary: 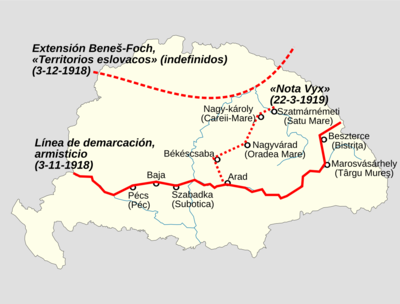 Demarcation line (thick red line): The area to the south of this line was to be abandoned by the Hungarian Army and occupied by Serbia (west) and Romania (east), under supervision of the French Army.

After this agreement was signed the Romanians totally ignored it, and with support from the Allies, particularly the French, they continued their advance into the heart of the Hungarian nation. Eventually the Republic fell to Communism for a brief few months. On March 2nd 1919, Károlyi addressing Hungarian soldiers in Transylvania said:

I will never accept the dismemberment of Hungary! The world must understand that if the Paris Peace Conference decides against the right of popular self-determination based on mutual agreements, then as an extreme necessity we will liberate our country with arms in our hands.

All of this got me thinking about the plight of Germany up until September 1st 1939. In the case of Hungary we see the Allied disregard for the autonomy of a defeated nation. We see the Hungarian president attempt by peaceful methods to deal with the crisis and get ignored, we see the Allies violate their own peace treaties and had they not done so, Hungary might've been saved from Communist savagery. Yet nobody talks about it, and what's worse, nobody cares. The sentiment in the above quote by Károlyi could also be attributed to Adolf Hitler, yet such words if uttered by the latter would be used as evidence for his determination on war and his aggressive posturing against 'peaceful' neighbouring states like Czechoslovakia, even though that country helped dismantle Hungary, and in 1939 when Hacha requested a meeting with Hitler he expressed his fear over a Hungarian invasion. This is what prompted Hitler to demand that the Czechs either side with Germany and sign over Czechia as a protectorate, or be consumed by the Hungarians.

I think many people can sympathise with Károlyi, and wouldn't find anything inherently wrong with his determination on war because it was for a noble cause. At least, I don't think anyone would be offended by his statement, most people I think would read it and not think much else about it, understanding that it was a specific time in world history where nations did those sort of things. But in the case of Hitler and Germany's plight, the case is entirely different. People defend countries like Poland, Austria and Czechoslovakia, not because they actually give a damn about those countries or their history, but because it gives them a justification to reprimand Hitler, even though Hitler's grievances are similar to that of Hungary's and are (if anything) more sympathetic. Had the allies stuck to their policies of self-determination, then there needn't have been a war between Germany and Poland over Danzig which was indisputably German, even having an elected National Socialist government.

In my view Hitler had every right to liberate German lands by force of arms if need be, this wouldn't have been immoral, and certainly not in the context of world history, or even European history at that time. Hitler himself stated quite frankly:

‘I’m not here to ensure peace in Europe; I’m here to make Germany great again. If that can be done peacefully, well and good. If not, we’ll have to do it differently.’

The world has gotten so caught up over the issue of 'Nazis' that they have failed to contextualize the National Socialists, and make any concessions about their legitimate grievances. The double standards are rife, and I think this comparison with Hungary serves as just one example.

Hopefully others find this interesting as well.
Now what does it mean for the independent expert witness Van Pelt? In his eyes he had two possibilities. Either to confirm the Holocaust story, or to go insane. - Germar Rudolf, 13th IHR Conference.
Top

It should also be noted that the Hungarian Soviet rejected the Allied peace and sought to forcibly rectify the territorial situation in favour of Hungary. Yet, if the Allies were seen to be morally righteous, then the Communists would be reprimanded for their aggression and much like the National Socialists, for seeking to take back territory by force and not accepting the Allied peace agreements (the Hungarian Communists supported a coup in Austria but it was foiled). Yet only one of these two regimes has gone down in history as eternally evil for their territorial ambitions, while the other receives endless apologetics.
Now what does it mean for the independent expert witness Van Pelt? In his eyes he had two possibilities. Either to confirm the Holocaust story, or to go insane. - Germar Rudolf, 13th IHR Conference.
Top

HMSendeavour wrote:Eventually the Republic fell to Communism for a brief few months.

Another thread about Hungarian communism:

Hungarian Soviet Republic's prime minister Sándor Garbai (21 March 1919 - 1 August 1919) was a non-Jew, but the later Jewish-Communist Hungarian leader Matyas [Rosenfeld] Rakosi "joked" that the Hungarian revolution's Jewish leaders took in Garbai, a gentile, so that they would "have someone who could sign the death sentences on Saturday" or the Jewish sabbath. (Jerry Z. Muller, 2010, 'Capitalism and the Jews', p. 153)
"There is a principle which is a bar against all information, which is proof against all arguments, and which cannot fail to keep a man in everlasting ignorance -- that principle is contempt prior to investigation."

The Treaty of Trianon which was signed after WW1 hit the Hungarian nation very hard and has similarities to the Treaty of Versailles - loss of land, population reduced etc. The Hungarian author Louis K Birinyi has written 2 books on the Treaty of Trianon and its aftermath and the forces that were responsible for it. They are The Tragedy of Hungary and Why The Treaty of Trianon Is Void -
http://www.jrbooksonline.com/birinyi.htm
There are 2 sides to every story - always listen or read both points of view and make up your own mind. Don't let others do your thinking for you.
Top
Post Reply
4 posts • Page 1 of 1