I came across this book a while ago. Where it seems that the Western Allies, the British at least were considering a preemptive strike against their Soviet ally? I mean...huff. Who would even consider such an evil thing against the peaceful Soviet Union that only wanted to defend itself? Golly geeze this just doesn't make sense! 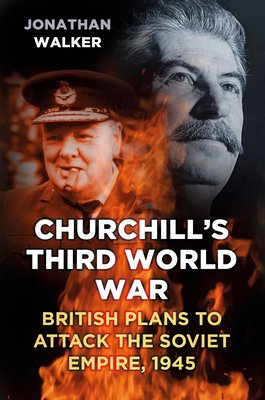 As the war in Europe entered its final months, the world teetered on the edge of a Third World War. While Soviet forces hammered their way into Berlin, Churchill ordered British military planners to prepare the top secret Operation Unthinkable - the plan for an Allied attack on the Soviet Union - on 1 July 1945. Using US, British and Polish forces, the invasion would reclaim Eastern Europe. The controversial plan called for the use of Nazi troops, and there was the spectre of the atomic bomb. Would yet another army make the fatal mistake of heading East?

In Churchill's Third World War Jonathan Walker presents a haunting study of the war that so nearly was. He outlines the motivations behind Churchill's plan, the logistics of launching a vast assault against an enemy who had bested Hitler, potential sabotage by Polish communists, and he speculates whether the Allies would have succeeded had the operation gone forward. Well supported by a wide range of primary sources from the Churchill Archives Centre, Sikorski Institute, National Archives and Imperial War Museum, this is a fascinating insight into the upheaval as the Second World War drew to a close and former alliances were shattered. Operation Unthinkable became the blueprint for the Cold War.

The initial primary goal of the operation was declared as "to impose upon Russia the will of the United States and the British Empire.

Very interesting, I guess the National Socialists weren't the only ones who'd have like to implement their will on Soviet Russia?

The hypothetical date for the start of the Allied invasion of Soviet-held Europe was scheduled for 1 July 1945, four days before the UK general election.[4] The plan assumed a surprise attack by up to 47 British and American divisions in the area of Dresden, in the middle of Soviet lines.[4] This represented almost half of the roughly 100 divisions available to the British, American and Canadian headquarters at that time.[3]

The plan was taken by the British Chiefs of Staff Committee as militarily unfeasible due to an anticipated 2.5 to 1 superiority in divisions of Soviet land forces in Europe and the Middle East by 1 July, where the conflict was projected to take place.[5] The majority of any offensive operation would have been undertaken by American and British forces, as well as Polish forces and up to 10 divisions of the former German Wehrmacht, re-mobilized from POW status. Any quick success would be due to surprise alone. If a quick success could not be obtained before the onset of winter, the assessment was that the Allies would be committed to a protracted total war. In the report of 22 May 1945, an offensive operation was deemed "hazardous". 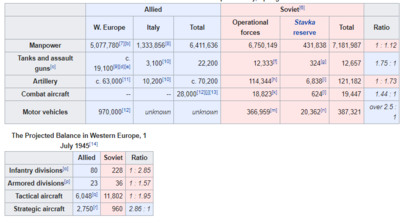 Why does it seems like there's a pattern here? An inherent need to take the Soviets off guard because of their military power? Does this not raise any red flags to anyone?

We're supposed to accept that the Soviets were unprepared for a German invasion, yet even after the disastrous Barbarossa campaign for both sides, the Russians STILL had military superiority after this bloodiest conflict in all of human history to fight off the western powers and the German Wehrmacht further? I mean, come on...Am I missing something or is there a lack of consistency here?

Operation Pike was the code-name for a strategic bombing plan, overseen by Air Commodore John Slessor, against the Soviet Union by the Anglo-French alliance.[2] British military planning against the Soviet Union occurred during the first two years of the Second World War, when, despite Soviet neutrality, the British and French came to the conclusion that the Nazi–Soviet pact made Moscow the ally of Hitler.[3] The plan was designed to destroy the Soviet oil industry, to cause the collapse of the Soviet economy and deprive Nazi Germany of Soviet resources.

So. Not only did the Germans have plans against the Soviets, but so did the allies, and their goal would've been to destroy both countries ability to gain resources, even if it mean't attacking the "innocent" neutral Soviet Union.
Now what does it mean for the independent expert witness Van Pelt? In his eyes he had two possibilities. Either to confirm the Holocaust story, or to go insane. - Germar Rudolf, 13th IHR Conference
Top

Re: Western Allies Plan to Invade Russia with a Preemptive Strike! - Operation Unthinkable and Operation Pike

They frame it as some sort of benevolent action for Poland. Yeah, the same Poland that Britain gave a "Guarantee" (Blank check) to, and started WWII over. Unsurprisingly the invasion of the USSR did not happen, so Poland was left under Soviet control. So much for Britain's promise to "Protect the freedom of Poland"

Re: Western Allies Plan to Invade Russia with a Preemptive Strike! - Operation Unthinkable and Operation Pike

Seems the Allies also had no problems starving out Russia as well.

The Allied leadership believed that if they succeeded in eliminating the Soviet oil supply, the resulting fuel shortage would lead to a collapse in agricultural production, probably producing a famine that might sweep the Communist regime from power.

Except when they do it it's strategic, not because they needed to divide the food supply to provide for their own military and civilian populace. Typically Germany gets lumped with the "extermination" badge on this one too.
Now what does it mean for the independent expert witness Van Pelt? In his eyes he had two possibilities. Either to confirm the Holocaust story, or to go insane. - Germar Rudolf, 13th IHR Conference
Top
Post Reply
3 posts • Page 1 of 1