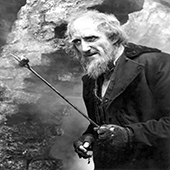 Long ago I discovered David Irving before it became fashionable to so. Yes, you’ve heard of him. Irving has spent his life researching WW2 and what this man hasn’t discovered in his years of research probably isn’t worth knowing.

The problem with debating history is that we tend to bring our biases with us. We focus on semantics and events become black and white. Opinions become facts and beliefs are proved with a quote from Google, which attracts an alternative response and the game is on.

The problem with Irving is that his books take weeks to read, as they should on something as detailed as the war. The detail is almost encyclopedic as both sides get an equal measure of blame, when necessary. The result is a factual account, not the one sided account debates we often hear.

Some of Irving’s books are now free to download in .pdf.
http://www.fpp.co.uk/books/index.html

Some of Irving’s brilliant lectures.

The Manipulation of History.


The Lies of the Nuremberg Trials.


And of course, this short list wouldn’t be complete without, ‘The greatest story never told.’ Six hours of mind changing documentary history that should be compulsory viewing in our western collapsing civilization, usury led, drug infested, feminized society.

I've been enjoying this Hitler's War audiobook https://archive.org/details/HitlersWarAudiobook If you have iPhóne, copy the files into iTünes and change type to "audiobook" Then you can listen where you left off using the Books äpp.
Top
Post Reply
2 posts • Page 1 of 1