Is the following letter real? In 1919 a German captain named Karl Mayr ran a military unit of the Bavarian Army in Munich in charge of educating demobilized soldiers. Part of its mission was to combat Bolshevik sentiment carried home by returning prisoners of war from recently revolutionized communist Russia.

Captain Mayr received an inquiry from a soldier named Adolf Gemlich who was doing similar work for the army in Ulm. Gemlich was asking about the Reichswehr's position on "the Jewish question".

Captain Mayr assigned the task of answering to a subordinate in his unit named Adolf Hitler.

In the resulting letter, a young Adolf made clear that opposition to Jewry was NOT based upon an emotional feeling of antipathy or 'hatred' against individual Jews but was instead based upon certain factual considerations and assessments.

He explained that he was of the opinion that Jewry as a collective whole posed a “danger” to the well-being of any nation-state because of certain specific commonly held traits, attitudes and behaviors which many Jews shared.

The danger posed by Jewry for our people today finds expression in the undeniable aversion of wide sections of our people. The cause of this aversion is not to be found in a clear recognition of the consciously or unconsciously systematic and pernicious effect of the Jews as a totality upon our nation. Rather, it arises mostly from personal contact and from the personal impression which the individual Jew leaves­­almost always an unfavorable one. For this reason, antisemitism is too easily characterized as a mere emotional phenomenon. And yet this is incorrect. Antisemitism as a political movement may not and cannot be defined by emotional impulses, but by recognition of the facts. The facts are these: First, Jewry is absolutely a race and not a religious association. Even the Jews never designate themselves as Jewish Germans, Jewish Poles, or Jewish Americans but always as German, Polish, or American Jews. Jews have never yet adopted much more than the language of the foreign nations among whom they live. A German who is forced to make use of the French language in France, Italian in Italy, Chinese in China does not thereby become a Frenchman, Italian, or Chinaman. It's the same with the Jew who lives among us and is forced to make use of the German language. He does not thereby become a German. Neither does the Mosaic faith, so important for the survival of this race, settle the question of whether someone is a Jew or non­Jew. There is scarcely a race whose members belong exclusively to just one definite religion.

Through thousands of years of the closest kind of inbreeding, Jews in general have maintained their race and their peculiarities far more distinctly than many of the peoples among whom they have lived. And thus comes the fact that there lives amongst us a non­ German, alien race which neither wishes nor is able to sacrifice its racial character or to deny its feeling, thinking, and striving. Nevertheless, it possesses all the political rights we do. If the ethos of the Jews is revealed in the purely material realm, it is even clearer in their thinking and striving. Their dance around the golden calf is becoming a merciless struggle for all those possessions we prize most highly on earth.

The value of the individual is no longer decided by his character or by the significance of his achievements for the totality but exclusively by the size of his fortune, by his money.

The loftiness of a nation is no longer to be measured by the sum of its moral and spiritual powers, but rather by the wealth of its material possessions.

This thinking and striving after money and power, and the feelings that go along with it, serve the purposes of the Jew who is unscrupulous in the choice of methods and pitiless in their employment. In autocratically ruled states he whines for the favor of "His Majesty" and misuses it like a leech fastened upon the nations. In democracies he vies for the favor of the masses, cringes before the "majesty of the people," and recognizes only the majesty of money.

He destroys the character of princes with byzantine flattery, national pride (the strength of a people), with ridicule and shameless breeding to depravity. His method of battle is that public opinion which is never expressed in the press but which is nonetheless managed and falsified by it. His power is the power of money, which multiplies in his hands effortlessly and endlessly through interest, and which forces peoples under the most dangerous of yokes. Its golden glitter, so attractive in the beginning, conceals the ultimately tragic consequences. Everything men strive after as a higher goal, be it religion, socialism, democracy, is to the Jew only means to an end, the way to satisfy his lust for gold and domination.

In his effects and consequences he is like a racial tuberculosis of the nations.

The deduction from all this is the following: an antisemitism based on purely emotional grounds will find its ultimate expression in the form of the pogrom. An antisemitism based on reason, however, must lead to systematic legal combating and elimination of the privileges of the Jews, that which distinguishes the Jews from the other aliens who live among us (an Aliens Law). The ultimate objective [of such legislation] must, however, be the irrevocable removal of the Jews in general.

The Republic in Germany owes its birth not to the uniform national will of our people but the sly exploitation of a series of circumstances which found general expression in a deep, universal dissatisfaction. These circumstances however were independent of the form of the state and are still operative today. Indeed, more so now than before. Thus, a great portion of our people recognizes that a changed state­form cannot in itself change our situation. For that it will take a rebirth of the moral and spiritual powers of the nation.

And this rebirth cannot be initiated by a state leadership of irresponsible majorities, influenced by certain party dogmas, an irresponsible press, or internationalist phrases and slogans. [It requires] instead the ruthless installation of nationally minded leadership personalities with an inner sense of responsibility.

But these facts deny to the Republic the essential inner support of the nation's spiritual forces. And thus today's state leaders are compelled to seek support among those who draw the exclusive benefits of the new formation of German conditions, and who for this reason were the driving force behind the revolution­­the Jews. Even though (as various statements of the leading personalities reveal) today's leaders fully realized the danger of Jewry, they (seeking their own advantage) accepted the readily proffered support of the Jews and also returned the favor. And this pay­off consisted not only in every possible favoring of Jewry, but above all in the hindrance of the struggle of the betrayed people against its defrauders, that is in the repression of the antisemitic movement.

I am wondering if this letter is actually real, as in, did Hitler truly write it?

More on it here:

I am willing to bet that Hitler was able to spell words in his native tongue better than whoever typed this up. I don't think his final draft would look such a mess either. I think also the person who wrote this does not speak German as their native language as they wouldn't have chosen some of those words.
Top

Denogginizer wrote:I am willing to bet that Hitler was able to spell words in his native tongue better than whoever typed this up. I don't think his final draft would look such a mess either. I think also the person who wrote this does not speak German as their native language as they wouldn't have chosen some of those words.

Care to give some examples, Denogginizer?

I believe this is the full German text:

Die erste bedeutende Äußerung Hitlers über den Antisemitismus: Antwort an Adolf Gemlich (16. September 1919)
https://archive.is/vwtIp
"There is a principle which is a bar against all information, which is proof against all arguments, and which cannot fail to keep a man in everlasting ignorance -- that principle is contempt prior to investigation." 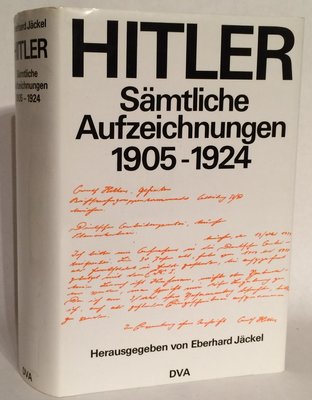 Eberhard Jäckel published and authenticated 76 FORGED Hitler documents that are contained in this book. Even the document on the dust jacket of his book is a fake. It's ironic and rather poetical; the people who want to smear Hitler as a liar and a fake are really just writing Hitler in the way they are themselves:

Jäckel had recklessly procured the questionable documents from the notorious forger and counterfeiter Konrad ("Hitler Diaries") Kujau. Even the document used for the dustjacket of the book Hitler, Sämtliche Aufzeichnungen, 1905-1924, turned out to be a Kujau forgery. Jäckel also authenticated the Hitler Diaries in 1983.

It's also funny that Jäckel accused David Irving of collecting documents that only fit his preconceptions when Jäckel himself is the BEST CASE there could ever be of a so called "Historian" doing just that, hell, not even that, he didn't just collect documents that would support his view but he used FAKE documents, further cementing the fact that he was selectively picking the documents that would best make Hitler look bad.

Jäckel is the scummy embodiment of the entire historical establishment on the Third Reich, a liar, hypocrite, and untrustworthy swine who's books deserve to be forgotten. Yet he's cited. David Irving is also cited regularly, but he's smeared indefinitely for simply being less biased than the Holocaust cultists.

David Irving has never done anything remotely close to what Jäckel had accused him of, but you can still tout the books of the latter without any social or academic repercussions, this fact alone is all the proof you need to recognise the tyranny of the establishment and their cult of conformity on Hitler. They need you to adjust to their a priori predetermined historical narrative, as we well know.

Jäckel is also a forger of photographs:

Whether or not this letter from Hitler is one of these fake documents I do not know. Dalton does use it in his book "Hitler on the Jews" (Pp. 102) (PDF: https://mega.nz/file/mPglCbZa#arZX_UKShstklqkXPPdeWDqTOGKhNLE6sjf7nIMX-bQ), I personally think it's real.
Now what does it mean for the independent expert witness Van Pelt? In his eyes he had two possibilities. Either to confirm the Holocaust story, or to go insane. - Germar Rudolf, 13th IHR Conference
Top
Post Reply
4 posts • Page 1 of 1