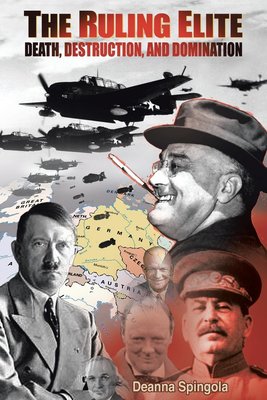 (cool book, although I wish the cover was less cluttered and more professional, more simplistic)

I flipped to page 375 where there was a curious factoid I had never heard before, and this is what it was:

Despite what the textbooks claim, Poland declared war on Germany at midnight, on August 31, 1939

The footnote is number 1013, and the source is 'Table of Acts of Malice, Aggression and Declarations of War beginning in September 1939'. It's not a book and doesn't have a discrete source, the first link I found was https://www.wintersonnenwende.com/scriptorium/nexus/NXdeclarations.html

And here we can see the claim itself: 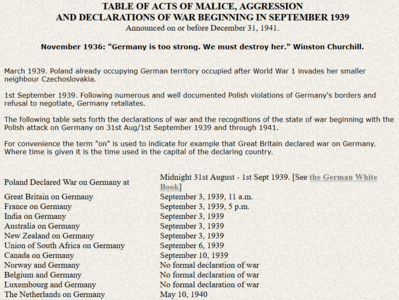 The source for the claim is the German blue and white book. If you click the hyperlink it'll take you here: https://www.wintersonnenwende.com/scriptorium/deutsch/archiv/dokuvorgeschichte/dvk40.html#465

to document 465. You need to translate it into German, but that's totally unnecessary because the full official english translation of the white and blue book is available online: https://forum.codoh.com/viewtopic.php?f=20&t=12755&p=94607#p94607

Since an hour ago, notices ordering a general mobilization have been posted in Poland. The first day of mobilization is August 31 ; every-body in possession of a white mobilization card must report at once

This struck me as odd, because this isn't a declaration of war. Not a formal one anyway. I was wondering whether or not this in itself qualifies to actually be a declaration of war? At first I was confused because this was ordered on August 30th, 1939 not August 31. But I guess whoever originally wrote the original claim was calling it a declaration of war slated to the next day at Midnight because that's when the mobilisation would be in place? I guess the implication was that war was going to be waged by the Poles if the Germans didn't invade on September 1st anyway?

The Poles cement themselves into guilt further, if we accept that document 465 is a willing sign of aggression and not defense as i'm sure some would claim, when on August 31st at 11PM a broadcast from Warsaw (Doc No. 469) takes a further stand on their previous mobilisation order when they say:

The publication of the official German communique today (Doc No. 468) has clearly revealed the aims and intentions of German policy. It proves the undisguised aggressive intentions of Germany towards Poland. The conditions under which the Third Reich is prepared to negotiate with Poland are: Danzig must immediately return to the Reich; Pomorze, together with the cities of Bromberg and Graudenz, are to be subjected to a plebiscite, for which all Germans who left that territory for any reason whatsoever since the year 1918 may return ; the Polish military forces and the police force shall be evacuated from Pomorse; the police force of England, France, Italy and the U.S.S.R. will be placed in charge of the territory; the plebiscite is to take place after twelve months have elapsed ; the territory of the Hela Peninsula will also be included in the plebiscite; Gdynia as a Polish town is excluded; irrespective of the result of the plebiscite an exterritorial road one kilometer wide is to be constructed. . . . .

The German News Agency announces that the time allowed for the acceptance of these conditions expired yesterday. German has waited in vain for a Polish delegate. The answer given was the military orders issued by the Polish Government.

Words can now no longer veil the aggressive plans of the new Huns. Germany is aiming at the domination of Europe and is cancelling the rights of nations with as yet unprecedented cynicism. This impudent proposal shows clearly how necessary were the military orders given by the Polish Government

This seems pretty damning for the Poles if i'm being honest.

It could be argued that the Poles had to issue their mobilisation orders because as they claim, the German propositions which they outlined and are pretty reasonable had expired, so fearing the expiration and in their minds subsequent military conflict from Germany they had to take this action.

However, this doesn't fully sit right with me because they themselves admitted above that their mobilisation orders and purposefully not sending a delegate were the answer to the the very reasonable German proposals, thus the Poles become the ones who start the aggression (in the true military sense) which culminates in the German invasion the next day on September 1st. It appears (to me) that the Poles were more than happy to rebuke the Germans and in so doing they themselves chose war in that moment. Which leaves the interpretation that it was in any way defensive on the part of the Poles rather unlikely.

I think the culmination of these two documents make a stronger case than the lone document 465 does, because you really only get the sense that war was chosen when you read a little further on.

Thoughts?
Now what does it mean for the independent expert witness Van Pelt? In his eyes he had two possibilities. Either to confirm the Holocaust story, or to go insane. - Germar Rudolf, 13th IHR Conference.
Former username: HMSendeavour
Top

A formal declaration of war needs to be distinguished from a casus belli. It's the casus belli that determines whether there is a state of war or belligerency. Formal declarations of war are commonly made in response to some casus belli. In case of the Polish-German War of 1939 there where several disputes at hand most stemming from the end of WW1 and the 'Treaty' of Versailles. The disputes were mainly about borders, Danzig and the fate of ethnic Germans in Polish controlled areas. There were also border violations and both sides did actually accuse the other one of this.
Top

Hektor wrote:A formal declaration of war needs to be distinguished from a casus belli. It's the casus belli that determines whether there is a state of war or belligerency. Formal declarations of war are commonly made in response to some casus belli. In case of the Polish-German War of 1939 there where several disputes at hand most stemming from the end of WW1 and the 'Treaty' of Versailles. The disputes were mainly about borders, Danzig and the fate of ethnic Germans in Polish controlled areas. There were also border violations and both sides did actually accuse the other one of this.

The Poles did not formally declare war, that was obviously not a good tactic to use nor one they ever needed to utilize. However, if they did it would've been interesting to see if Britain would actually have gone on to declare war on Germany.

In any case, it's an irrelevant point.

The Poles as I showed, did "declare" war in a sense, and certainly not a vague one.

They told the Germans that their answer to their reasonable "demands", was the mobilisation of their armed forces. This is a declaration of war in that they were saying very openly how they chose war as their self proclaimed answer to the question of how the border problem was to be solved between Germany and themselves. I should say that what the Germans offered the poles were not "demands", they weren't buttressed with any threats. So, it'd be more accurate to describe them as points of negotiation. Fact is, all parties have a baseline set of "demands" that they will not budge on at the end of the day, and the Germans wanted no more than what was rightfully theirs. The Poles however, as we know, didn't consider the land inhabited by Germans to be German. They were actively colonising it as Richard Blankes in his book "Orphans of Versailles" makes very clear.

They didn't need to formally declare anything as all they and the British needed to do was wait until Germany was forced to act. Which, she eventually, and rightfully did.

The Poles mobilised multiple times. In March they did so, prior to the British guarantee, and before the Germans even had any plan whatsoever for the invasion of Poland, which at that time hadn't even been considered.

* The Poles also blew up a bridge over the Weichsel, the eastern end of which was on German territory, at Dirschau, on 31 August 1939; personally I consider this a legitimate defensive action; but the Poles cannot simultaneously complain of a German "surprise attack". The point is that they were prepared for it and provoked it.

(In international practice, mobilization is considered equivalent to a declaration of war, because the ordinary business of the country cannot be carried on if every adult male is in the army. This is what caused the First World War and the invasion of France: once the Russians and French mobilized, the Germans had no choice but to declare war on France and try to knock France out of the war before the Russians could complete their mobilization (which would inevitably take time due to the extremely poor Russian transportation infrastructure); otherwise Germany would have been invaded by combined armies of 4-5 million men, the whole war would have taken place in Germany, and the country would have been devastated. That "mobilization means war" is simply a fact. The Germans were the last to mobilize in 1914, and the last to mobilize in 1939.)

The author cites 127 Polish sources (a language which he could actually read), and backs up his statements with an annotated bibliography 57 pages long in small print. The Poles should read this book to discover how badly their leaders deceived them. - C.P.]

If the Germans had done here what the Poles had done - nobody would hesitate to blame the Germans for effectively declaring a war and at the very least displaying their aggression. The fact that people are eager to clear Poland of such actions that they would otherwise condemn if Germany had done them, goes to show the absurd lengths people will go to justify obviously hypocritical actions in favour of the Poles because they hate the Nazis.
Now what does it mean for the independent expert witness Van Pelt? In his eyes he had two possibilities. Either to confirm the Holocaust story, or to go insane. - Germar Rudolf, 13th IHR Conference.
Former username: HMSendeavour
Top

Well one can distinguish a formal from a performatory declaration of war. A formal one would be a written or public announcement that one declares war on country X. The performatory one would manifest itself in certain actions that are provocative, threatening or outright violation of international law or peace between nations. Like an invasion, but it doesn't have to be an official invasion.

The "Versailles Treaty" is sometimes called a peace Treaty. It was not. While fighting between two armies ceased, it was still a continuation of aggression and violation against Germany. It was this in the sense that:
- Core territories (settled by Germans) remained occupied or cut off from the main country.
- Demand for payments were upheld and enforced, which had to be paid by German tax payer leading to abject poverty in Germany.
- Other humiliating measures were forced upon Germany that impaired its sovereignty.

Yet the NS-government did try to resolve the issues peacefully and on an amicable basis.
Top
Post Reply
4 posts • Page 1 of 1