I have just come across a book that is totally unknown and has some pretty damning facts behind it. 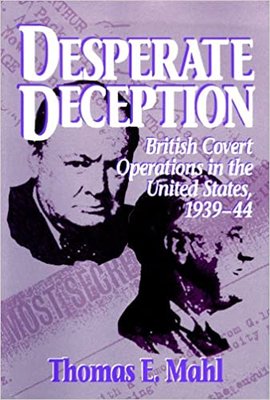 Thomas E. Mahls "Desperate Deception" is a book that goes into immense detail about how the British at the beginning of WW2 infiltrated the United States with anti-German propaganda to change public opinion and to force the United States into the war they started. Here is a review of the book by Richard Ebeling which points out some of the facts contains within the book:

Ž The falsification of information. For example, in October 1941, Franklin Roosevelt delivered a nationwide address in which he said that he had in his possession a captured German map of South America tracing out the planned Nazi invasion of Brazil. The map had been skillfully created by a British team in Toronto and passed on to the White House. It was used by Roosevelt for pressuring Congress to repeal some of the neutrality legislation. In November 1941, the British government decided that there were not enough dramatic photographs of Nazi atrocities. The BSC arranged for a studio in Canada to create such photographs using actors, stage-sets, costumes, and dummies for the manufacture of war scenes in which actors dressed up as Nazi soldiers were shown mass-murdering innocent people. These photos were widely circulated in the United States.

I wonder if the book will actually touch on Roosevelts complicity, there is a possibility it doesn't, or at least won't hit as hard on it as is necessary. But in any case, the fact that Roosevelt willingly complied and was working to repeal neutrality legislation is proof enough of his own duplicitous foreign policy and domestic objectives to lie to the American people and force them into a war they didn't want.

Britain also had the media in the United States thoroughly under their thumb:

The use and manipulation of the press and public figures. The British obtained the covert and implicit support of such leading public figures of the press and the news media as Walter Winchell (radio commentator); Dorothy Thompson (author and columnist); Walter Lippman (author and essayist); Robert E. Sherwood (author and screenplay writer); Paul Patterson (publisher of the Baltimore Sun) ; Marshall Field (businessman and founder of the Chicago Sun ); Henry Luce (publisher of Time, Life, and Fortune); Harold Guinzburg (cofounder of Viking Press); and many others to bias news and commentary towards the British and in favor of American entry into the Second World War. Some of them were used through British-sponsored or -supported “front” organizations; some consciously participated in a covert campaign for the British cause.

Some of these names sound rather Jewish to me. But I don't know.

I suggest you read the entire review and read a copy of the book. I have never seen this book quoted by other historians, and they simply avoid mentioning facts like this because it doesn't suit their narrative. There's a lesson here, historians don't need to lie overtly, they simply need to lie by omission. Which of course they do all of the time. It's easier just not to include something than it is to potentially expose yourself with outright distortion and fabrications. Revisionist books are ignored and old viewpoints long refuted are promoted as eternal truths.

This books has to offer very interesting revelations which do much to support the revisionist position, which is in reality, just the truth.
Now what does it mean for the independent expert witness Van Pelt? In his eyes he had two possibilities. Either to confirm the Holocaust story, or to go insane. - Germar Rudolf, 13th IHR Conference.
Top
Post Reply
1 post • Page 1 of 1