All aspects including lead-in to hostilities and results.
Forum rules
Post Reply
2 posts • Page 1 of 1

I haven't got this book yet so cannot comment on its contents and am only now about to listen to the interview.

In September 2014 Joshua Blakeney undertook extensive archival research at the National Diet Library in Japan. The documents he retrieved, along with the other essays in this book, provide the "Japanese side of the argument" about the origins of the "clash of civilizations" that was WWII in Asia. The bolshevization of China, Western meddling in Asia, Soviet infiltration of the White House, U.S. expansionism in the Pacific, the anti-Japanese provocations which spawned the Pearl Harbor operation and Japan's Pan-Asianist policies are all subjects explored in the book.

Joshua Blakeney is a freelance journalist originally from the UK based in Canada. He has been Press TV's Canadian correspondent since April 2012. He is a co-host of The Real Deal radio show and co-founder of Non-Aligned Media. In 2014, after extensive archival research at the Diet National Library in Japan, Blakeney published Japan Bites Back: Documents Contextualizing Pearl Harbor, the topic of our discussion. Joshua begins with an overview of his journey into the world of WWII revisionist history, a subject that is far less taboo in Japan than it is in the west. He speaks about the backdrop of Japan as the perceived aggressor in the Pearl Harbor operation, and the threat of communism that went against Japan’s unique, homogenized and autonomous way of living. Joshua explains the history of Japan’s interests in preserving the Asiatic agrarian societies and the need to expel White influence. Then, we compare Pan-Asianist ideology to Iran’s attempt to unify its region today. Joshua makes connections to false flag events such as Pearl Harbor and origins of wars that have been interpreted in a fraudulent manner. In the members’ segment, we weigh up the magnitude of the history of nuclear weapons used to annihilate Japan by the US in sick demonstrations of power over the Soviet Union and the east. Later, Joshua illustrates Japan’s homogenous, tight-knit culture that strongly rejects New World Order policies and multiculturalism. We discuss the need for a 3rd position to view the imported problems created by mass immigration, along with the necessity for Muslims and Whites to avoid serving Zionist interests. At the end, Joshua describes how Japan’s connection to the land and collective spirituality has allowed the country to develop a superior culture. 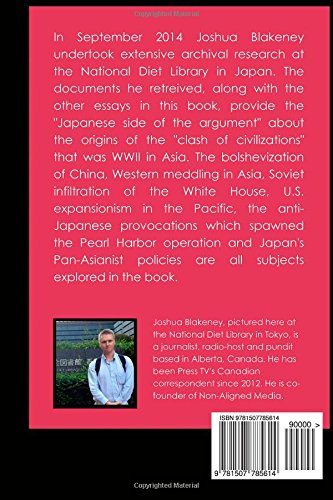 Other articles of interest regarding Pearl Harbour at the Institute for Historical Review:
https://www.google.co.uk/search?q=tolan ... te:ihr.org
"Believe me, I came into Auschwitz in a much worse condition than I actually left it."
- Kitty Hart-Moxon, Jewish Holocaust Survivor (June 1998 testimony, USC Shoah Foundation, Visual History Archive. Part 2 - YouTube - 1:21:42)
Top

Looks like a very interesting book. Thanks for sharing this info with us.

Reminds me of this video:


https://www.youtube.com/watch?v=7ti2K5yStfU
"But, however the world pretends to divide itself, there are ony two divisions in the world to-day - human beings and Germans.” – Rudyard Kipling, The Morning Post (London), June 22, 1915
Top
Post Reply
2 posts • Page 1 of 1