Not long after the First World War, the Red Army attacked Poland in an attempt to impose communism over central Europe. While the Soviets began their assault, communist parties all around Europe cheered on the invasion. Germany at the time was in a state of collapse, undergoing various communist uprisings with Bavaria having declared itself a Soviet Republic. Leaders in France and England watched helplessly as the Polish people were fighting tooth and nail against the Bolshevik hordes. 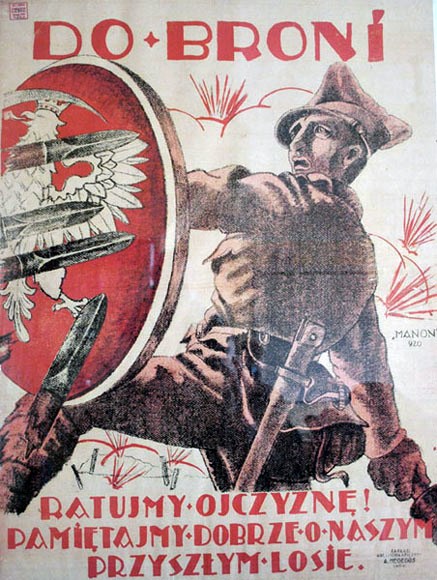 The history of contemporary civilization knows no event of greater importance than the Battle of Warsaw, 1920, and none of which the significance is less appreciated. The danger menacing Europe at that moment was parried, and the whole episode was forgotten. Had the battle been a Bolshevik victory, it would have been a turning point in European history, for there is no doubt at all that the whole of Central Europe would at that moment have been opened to the influence of Communist propaganda and to Soviet invasion, which it could with difficulty have resisted. It is evident from speeches made in Russia during the war against Poland that the Soviet plans were very far-reaching. In the more industrialized German towns plans were made on a large scale to proclaim a Soviet regime a few days after Warsaw had fallen... Several times Poland has been the bulwark of Europe against Asiatic invasion, yet never had Poland's services been greater, never had the danger been more imminent. The events of 1920 also deserve attention for another reason: victory was attained above all thanks to the strategical genius of one man and thanks to the carrying through of a manoeuvre so dangerous as to necessitate not only genius, but heroism... It should be the task of political writers to explain to European opinion that Poland saved Europe in 1920...

The Polish military achieved an unexpected but decisive victory at the Battle of Warsaw. As the Poles advanced eastward, the Soviets sued for peace and in October 1920 the war ended with a cease-fire. The Peace of Riga was signed on 18 March 1921.

From the book 'The Jewish Threat: Anti-Semitic Politics of the American Army':

"It is vital to our national interests," Churchill [Marlborough Churchill, related to Winston Churchill, was a native New Englander and also a Harvard alumnus, had served in the U.S. military mission in Paris since 1916] counseled the secretary of war in January 1919, "that Poland's defensive power be maintained unimpaired." 24 In Churchill's strategic thinking, the newly created Polish state stood as "Europe's bulwark against Bolshevism"; it had become nothing less than "a vital rampart protecting the civilization of the world."

Although others also combined geopolitics and anti-Bolshevism to justify staunch pro-Polish policies, Churchill's underlying suppositions gave his policy paper on Poland a noticeable distinctiveness. He had written a paragon of Social Darwinist theory, which in style, tone, and basic concepts, read like pages composed by racial ideologues of the Madison Grant school. It represented one of the clearest policy applications of core ideas pervading the thought of officers in this era.

Like Major Woodruff, the army's own Darwinist theoretician, Churchill attributed the appeal of Bolshevism to man's eternal striving for survival. The availability of food would determine the success or failure of Bolshevism. No exception to this "maxim," postwar Poland posed a particularly critical problem, for it served as the geopolitical gateway to Europe.

Although "the heart of civilization, culture and material well-being," Europe was "but the tip end of a peninsula extending out from the great Eurasian Continent." Favored by "climate and geology," Western civilization emerged and flourished there only because "from time immemorial, the Teutonic tribes-- lately known as the Central Powers," protected it "from the vast hordes of disorder and barbarism living to the eastward throughout the vast Eurasian Continent." Invoking contemporary racial stereotypes as elaborated by American war propaganda, Churchill depicted the Germans as "virile, warlike and indomitable. "Historically, they "formed the natural dam against which the glacial pressure of vast human masses, moving westward from the dreary primitive expanses of the Eurasian Continent were checked and held. "Previous wars in the West had been merely "the eddying strife of a sheltered people," since "everything to the west of this dam developed in security." Tragically, all this had changed when World War I "destroyed, at least temporarily, this great Teutonic dam." 25

"The mere mechanics of life" now made the West extremely vulnerable. Through their "physical power of superior numbers, superior physique and a greater lust for aggrandizement," the "Slavic and Turanian races" would inevitably overrun Europe unless checked by the new dam constructed by the Treaty of Versailles-- Poland. Unfortunately, the Polish state, "the only barrier remaining between Europe and the hordes of Eurasia" led by the Bolsheviks, is a "weak" dam about to be swept away by this "eastern flood." Unless reinforced by essential food and military supplies, the brave Poles, currently sustained only by "intense patriotism," would collapse.
...
About a year had passed since Churchill's policy statement naming Poland as the bulwark safeguarding Western civilization. Meanwhile, information emanating in Europe about suspicious Jewish activities reverberated through military intelligence circles: Jews refused to fight in Polish armies; spies "invariably proved to be Jews"; Zionists waged a propaganda war against Poland; Jewish hoarders and speculators seized control of the food supply while Poland faced starvation. 59

Under the title "The Jews Again," MID stated that currency smuggling by "Jewish brokers (money sharks)" in collaboration with German interests undermined Poland's financial foundations. "The houses of both usury and prostitution are known to be almost without exception in the hands of Jews." Other MID reports offered images of Jewish Bolshevik leaders engaged in "unspeakable barbarity," while elsewhere Jewish inhabitants of towns "cheered" and "overwhelmed [the Bolsheviks] with flowers."
...
Now concerned with "International Jewry," officers noticed a "curious synchronization" of Zionist strategy with Poland's enemies, Germany and Bolshevik Russia. The Russian link held particular significance, since "the Jewish-controlled Bolshevik State has always found in the united and nationalistic Poland its most formidable obstacle in spreading toward Western Europe." The tendency of American newspapers and Zionists to promote this anti-Polish hostility ran "flagrantly counter ... to American foreign policy"; it warranted an investigation to uncover the "actual forces behind" the entire campaign. As one officer queried:

Is a cabal of international Jews using American public opinion as a lever for pro-German and pro-Bolshevik ends against Poland? ... [And] what Jewish interests in particular are encouraged in doing this? 61
A few weeks later, Churchill personally selected and forwarded to MID and the State Department similar information from a Van Deman source. According to this "impartial and intelligent" informant, there existed a scheme to manipulate the controlled world press through exaggerated atrocity stories about Poland, while consciously neglecting the killing of 30,000 Ukrainian Jews. "The only explanation... is that the design is to make Poland the commercial Judea from which as a basis European trade will be controlled, especially the coming great market in Russia." The settlement at the Peace Conference of disputed Polish-Ukrainian oil fields "was dictated by Jewish interests." Such events were "the most worth watching," because "world peace" itself was at stake. Unfortunately, "we do not by any means know all the plans definitely made nor would it be very easy to find them out." 62


Unfortunately for Europe, the inability of Poland and Germany to come to an agreement and unify against the threat of Bolshevism caused Poland, much of Germany, and the rest of Eastern Europe to fall victim to the Soviet menace two decades later.

When the USSR invaded Poland, Britain was silent
viewtopic.php?t=7556

The Jews behind the Bavarian Soviet Republic of 1919
viewtopic.php?t=12633
"There is a principle which is a bar against all information, which is proof against all arguments, and which cannot fail to keep a man in everlasting ignorance -- that principle is contempt prior to investigation."

Re: The Polish-Soviet War: When Poland saved Europe from "the Jewish-controlled Bolshevik State"